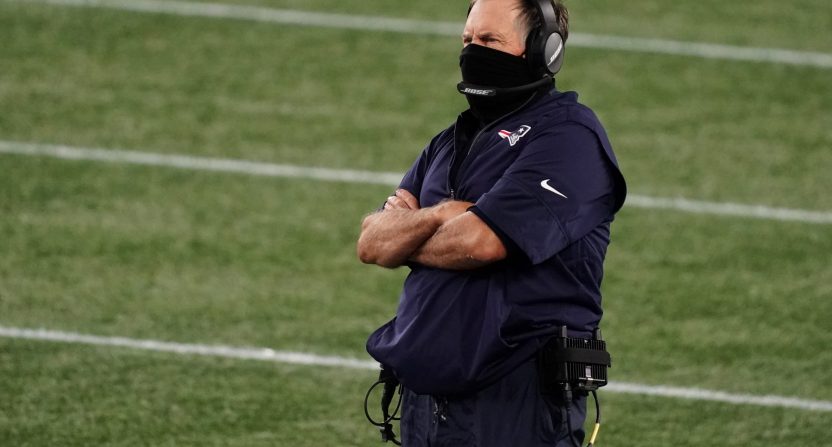 The New England Patriots have missed the playoffs exactly one time going back through the 2001 season. It was 2009, when they lost Tom Brady to an injury on opening weekend. They still went 11-5.

That’s an incredible run, driven by a partnership between Bill Belichick on the sidelines and one of the best quarterbacks of all-time on the field. Tom Brady, though, is gone; taking an early retirement to Tampa Bay (okay, no, they’re actually pretty good too now) after clashing at times in recent years.

Now, though, without Brady, things don’t seem to be coming together for the new New England. Signing Cam Newton to a low-cost deal looked like a genius decision after the first few weeks of the season, but since a positive Covid test he hasn’t looked like the same player at all.

He looks like the QB I feared he was. But the upside with him,—which he showed early this year — is obviously so enticing.

But yeah, he’s pretty hard to trust on a weekly basis at this point. Has looked really rough most of the time. https://t.co/32Y3iqV3Pp

Maybe they're related. *Absolutely* possible. But this is the QB he looked like most of the last few years too, so who knows. https://t.co/OLgVdc8mDH

That manifested today with a big loss to the 49ers, going down 33-6 to former Patriots backup Jimmy Garoppolo. Garoppolo was solid aside from two interceptions, while Newton ended up going 9/15 for 98 yards and three interceptions. With the game out of reach, Newton ended up being pulled for Jarrett Stidham, who didn’t fare any better. The loss drops New England to 2-4, and they now sit third in the AFC East.

That division isn’t quite as terrible as usual. Obviously the Patriots were great throughout the Brady era, but very few seasons featured a real playoff push from the Jets, Bills, or Dolphins. This year, again, the Jets are horrible, but the Bills and Dolphins look very much like they could be competitive for a spot in the expanded seven-team playoff field. At 2-4,

Next Sunday, the Bills host the Pats in Buffalo for a game that could end up being crucial for both teams. A Buffalo win could knock New England to the brink of the playoff picture after just seven games, while boosting their own playoff odds significantly.

A New England win, meanwhile, would muddy up the division and give the Patriots even more room for error. But for a franchise that has had just one losing season since 1995, 2-4 is very unfamiliar territory. It had to come at some point, of course, but it’s hard to believe that we’re actually, finally watching it happen, if we are indeed doing so.