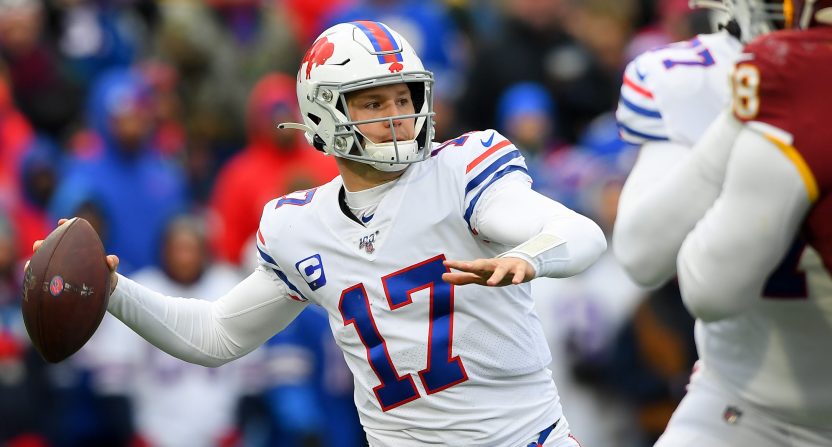 Josh Allen has run out of excuses. The Buffalo Bills’ quarterback with the powerful arm, quick feet, and erratic delivery needs to produce this fall. No other young quarterback has benefited more from the NFL’s offseason moves:

The pressure will be on, and justifiably so. Allen needs to deliver the Bills their first AFC East championship since 1995. The Patriots, who currently don’t have a starting quarterback, remain slight favorites to win the division for the 12th straight season. According to oddsshark.com, New England was around -800 before Brady left for Tampa Bay. Now it’s down to -110. Buffalo is the second betting favorite at +175, the New York Jets are a distant +650, and Miami Dolphins are miles away at +1000.

Buffalo is in win-now mode. Not only did the Bills get Diggs, but they added key reinforcements in defensive end Mario Addison and defensive tackles Vernon Butler and Quinton Jefferson to a defense that was second in the league in points allowed (16.2).

The Bills are coming off a 10-6 season and just their second playoff appearance over the past two decades. They lost in the playoffs at Houston 22-19 in overtime, but might have pulled the upset with better quarterback play. In that game, Allen was 24-of-46 for 264 yards. He was a bigger threat running the ball (9 carries for 92 yards) and catching the ball (16-yard TD). Allen, who also coughed up a fourth-quarter fumble, conceded after the game: “Teams go how their quarterbacks usually go, and I’ve got to be better for this team.”

Allen will be only 24 when the season starts, but there are reasons for concern.

For his career, Allen has started 27 games. He has improved from his rookie season of 2018. Last year, he passed for 20 touchdowns, nine interceptions with four fourth-quarter comebacks. However, his completion percentage was 58.8 – the worst in the league.

What’s particularly alarming is Allen’s lack of accuracy on deep throws. When you have rare arm strength, you want to take advantage of that skill. According to @QBDataMine, Allen was – by far – the worst deep-ball passer in the league last season, connecting on 15-of-59 attempts.

Josh Allen, Stefon Diggs' new QB, is the worst deep passer in the NFL. He hit 15 of 59 attempts last season.

This brings us back to the acquisition of Diggs. Remember when he was annoyed by Kirk Cousins not getting him the ball? How is Diggs going to feel when/if Allen continuously misses him by 10 yards?

Having a deep threat is meaningless if you can’t get him the ball. In 2005, the Minnesota Vikings traded the greatest big-play wide receiver of all-time, Randy Moss, to the Oakland Raiders. Moss’ two seasons in Oakland were wasted (11 touchdowns in 29 games) because of poor quarterback play. It’s not a coincidence that once he joined New England in 2007, he scored an NFL single-season record 23 touchdowns with Tom Brady as his quarterback.

Obviously, Allen can’t be Brady, but he must do better. He has weapons: Diggs (63 catches, 1,130 yards, 6 TDs last season), John Brown (72 catches, 1,060, 6 TDs), and Cole Beasley (67 catches, 778 yards, 6 TDs). Longtime Buffalo sports columnist Jerry Sullivan pointed out that the Bills are now the only NFL team with two wide receivers who had 1,000 yards receiving last season and a third wideout who had 60-plus catches.

Monson added: “Add in Stefon Diggs, who can win at all levels, and in all ways, and this is an incredibly balanced receiving corps who can win everywhere on the field and get open consistently. They will paint a better picture for their quarterback than pretty much any other group in the NFL, particularly because they all excel at generating separation.”

If Monson’s assessment is correct, there will be only one person to blame if Buffalo’s passing game fails. Can Allen’s accuracy issues be fixed? At Wyoming, his overall statistics dropped from his sophomore year to his junior year before he entered the draft. And his career completion percentage in college was 56.2.

To be fair, scheme and surrounding talent may have factored into that. And as a pro, Allen improved from his rookie to second season. Still, he missed too many throws. In a league where the difference between winning and losing is often a few plays, Allen’s lack of accuracy could be a fatal flaw.

Buffalo will give Allen, the seventh overall pick of the 2018 draft, every opportunity to succeed. They don’t have a choice. Who else can they turn to? Matt Barkley? It’s up to offensive coordinator Brian Daboll to design a system that best fits Allen and his receivers.

If Allen fails, he’ll just be another first-round quarterback from that draft class who hasn’t lived up to hype, joining Baker Mayfield (No. 1 overall), Sam Darnold (No. 3), and Josh Rosen (No. 10). Well, at least one guy is succeeding.