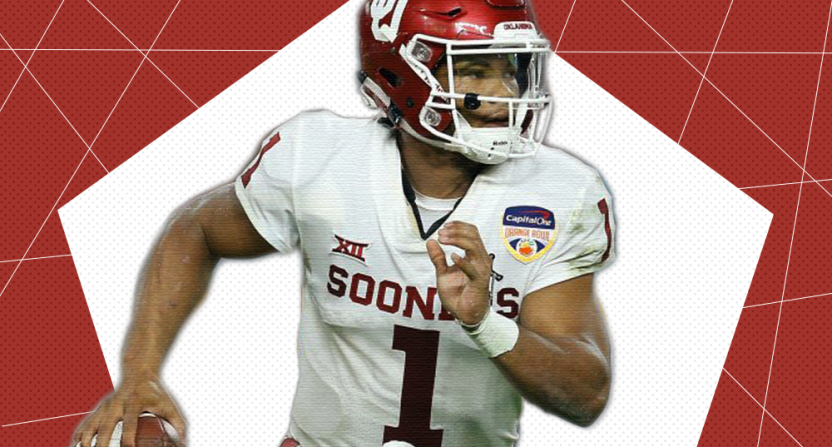 Two quarterbacks drafted one year prior to that quartet — Patrick Mahomes and Deshaun Watson — have already become stars, while a third — Mitchell Trubisky — has become a strong starter.

The previous draft class gave us Jared Goff, Carson Wentz, and Dak Prescott, all of whom have become/are becoming franchise signal-callers.

The year before that, Jameis Winston and Marcus Mariota went 1-2. And while the jury might still be out on both, those two have flashed brilliance at times and remain starters entering 2019.

Derek Carr has already made three Pro Bowls as a 2014 third-round pick, while Andrew Luck, Russell Wilson, and Nick Foles have become stars from the 2012 draft.

I just listed more than half of the NFL’s current roster of starting quarterbacks, all of whom were drafted in the last seven years.

Twelve of those 17 — all but Prescott, Carr, Wilson, Foles and Cousins — were drafted in the first round, and nine of those first-rounders were selected since 2016.

In other words, nine of the 11 quarterbacks drafted in Round 1 in the last three years have become or are clearly becoming franchise quarterbacks. The 10th is Josh Rosen, who could still take off after a rough rookie season in Arizona, and the only clear bust is Paxton Lynch, who wasn’t even a top-25 selection in 2016.

All of those first-round busts were drafted in a six-year span between 2006 and 2011 — a stretch which directly preceded the hot run that started with Luck, Wilson, Foles, Cousins and, to a lesser extent, Robert Griffin III and Ryan Tannehill in 2012.

Between ’06 and ’11, 10 of the 16 quarterbacks drafted in Round 1 became busts. The other six were Jay Cutler, Joe Flacco, Matt Ryan, Matthew Stafford, Sam Bradford, and Cam Newton, none of whom have exactly aligned themselves for the Hall of Fame.

The success rate was still below 50 percent.

That rate has grown to about 57 percent in the last seven years, although Rosen could still give it a boost (while Winston, Mariota or any of last year’s other rookie first-rounders could still bring it down).

But again, the real hot streak is within the last three years.

Last year’s rookie class was considered to be exceptionally talented, which explains why four quarterbacks were drafted in the top 10 for the first time in NFL history. But this year’s class contains far more question marks. Potential top-five picks Kyler Murray and Dwayne Haskins have a combined two years’ starting experience in college, while widely-projected first-rounders Drew Lock, Daniel Jones, and Will Grier have some glaring flaws.

A decade ago — heck, maybe a year ago — Murray might be considered a top-10 pick, Haskins might be a late-first-rounder and Jones, Lock, and Grier would probably be Day 2 selections.

But the NFL has been so deeply spoiled by recent quarterback classes that the league might be taking it too far in 2019.

History indicates this class could be heavy on busts as the law of averages kicks in and adjusts success rates. And if indeed we’re due for a correction, that could spell trouble for teams that use first-round picks on passers on Thursday night.

1 thought on “The QB bust rate has plummeted in recent years, but are we due for a spike?”