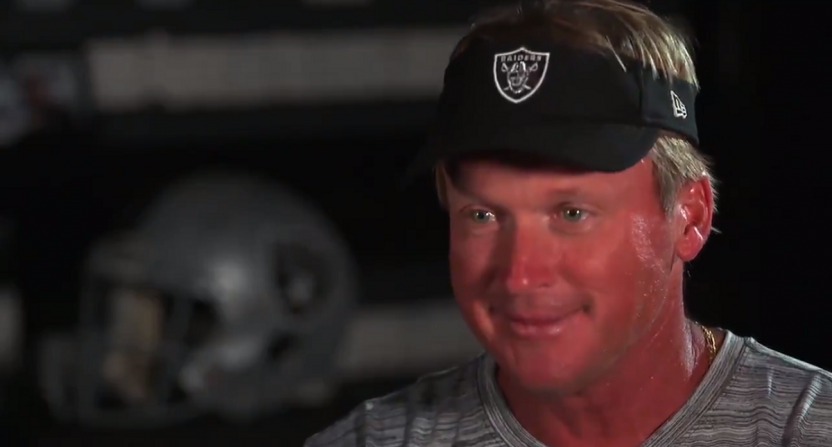 The Oakland Raiders are now 5-4 after a 26-24 victory over the Los Angeles Chargers on Thursday Night Football. Jon Gruden’s squad is playing winning football a year or two earlier than anyone could’ve expected.

Are they really as good as their record indicates? That’s debatable, but we’re over halfway through a 16-game season and they’re in playoff contention (and they definitely don’t look bad to the eye test, with plenty of impressive young talent- led by rookie RB Josh Jacobs; the Khalil Mack trade all of a sudden doesn’t look quite so bad).

And they don’t have to be great to remain in playoff contention throughout the season.

Now, winning the AFC West is very unlikely, unless Patrick Mahomes’ health remains an issue (and he’s expected to return this week). The Kansas City Chiefs (6-3) have a one-game lead on the Raiders, and they hold the head-to-head advantage so far after a 28-10 victory in Oakland in Week 2, with a home game still remaining in Week 13. Stranger things have happened, but the division crown is still a longshot. Five Thirty Eight gives the Raiders just a 14% chance at the division title.

But one of the two Wild Card slots is very attainable for the Raiders.

At the moment, the Raiders are a half game out for the AFC No. 6 seed, trailing the Indianapolis Colts (5-3). However, the Colts are a very flawed team themselves, and the Raiders already beat them in Week 4 in Indianapolis. So, if the Raiders and Colts finish with the same record, the Raiders would win the tiebreaker.

Other teams in the AFC Wild Card mix include the Buffalo Bills (the current No. 5 seed at 6-2), the Pittsburgh Steelers (4-4), the Jacksonville Jaguars (4-5), and the Tennessee Titans (4-5). It’s fair to question how good the Raiders actually are, but the same is the case for any of those teams, and the Raiders have a better record than all but the Bills. Buffalo is in pretty good shape with a 6-2 record and games against the Miami Dolphins and New York Jets still on the schedule, but nobody would be surprised if they regressed hard either.

It’s possible it only takes nine wins to secure an AFC Wild Card slot with the level of mediocrity in this race, but the goal should of course to be to at least get to 10 wins to feel much better about the chances (and some years that may not even get it done).

Here’s a look at the Raiders’ remaining schedule:

It’s easy to see the Raiders finding a way to win at least four of those games to get to nine wins, and 10 isn’t out of the question.

Right now, the Raiders would be favored vs the Bengals, Jets, Titans, and Jaguars. They would also be clear underdogs in Kansas City, of course. And the season finishes with road games against the Chargers and Broncos. The Raiders have already beaten both teams, and — while you can never take teams for granted in rivalry games — they will both be well out of playoff contention, while the Raiders would be a desperate team trying to reach the playoffs. Additionally, there really isn’t such thing as a “home game” for the Chargers, and especially in a city the Raiders called home for 13 years.

Five Thirty Eight currently projects the Raiders to win nine games and gives them a 38% chance at the playoffs. And those numbers will go up if the Raiders can take care of business against the dumpster fires that are the Jets and Bengals over the next two weeks.