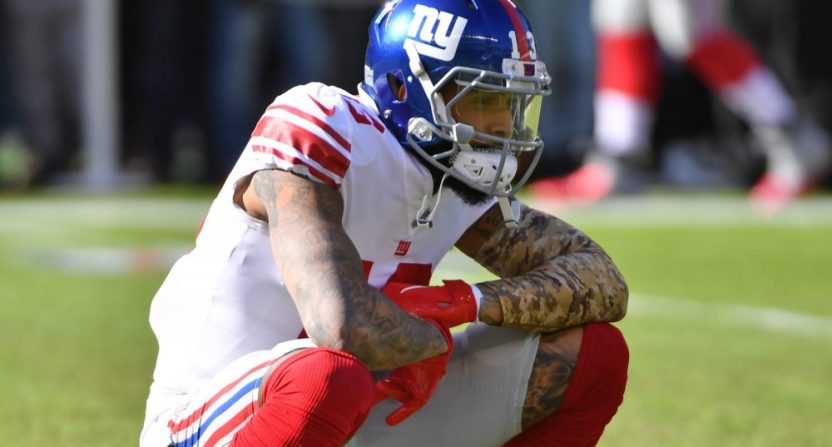 The first wave of the NFL free agent signing period is basically in the books, and there are some comically horrendous moves already in the books. Here are the worst of ’em.

It’s not that the Giants continually insisted that they didn’t sign Beckham to trade him, because teams lie and nobody is truly untradeable. A mid-first-round pick plus a Day 2 selection and a high-potential safety isn’t a terrible return, but the Giants are now paying one of the game’s best young receivers $16 million to play for an opposing organization, all while they’re willingly coughing up $23.2 million for their over-the-hill 38-year-old quarterback. They could have saved $17 million by parting ways with Eli Manning, and if you’re rebuilding anyway, there’s little harm in giving Beckham another year.

John Elway has to stop chasing his tail. The 34-year-old Flacco has never been elected to a Pro Bowl and is the second lowest-rated qualified passer in the NFL dating back to 2013. He doesn’t deserve a starting job, let alone an $18.5 million salary.

Mosley isn’t a bad player, and this would have been worse if they’d also signed non-rushing linebacker Anthony Barr (it might have been a blessing in disguise that Barr backed out and rejoined the Vikings), but you just don’t give that kind of money to a stay-at-home linebacker. Mosley’s deal averages a silly $17 million per year, while no other non-rushing linebacker in football makes $14 million.

Bell didn’t get what he could have made last year with the Pittsburgh Steelers, but an average annual salary of $13.1 million is still insane for a player at the increasingly devalued running back position. A first-team All-Pro running back hasn’t won the Super Bowl this century, and only two of this century’s 19 Super Bowl-winning teams (Baltimore and Seattle) even had a Pro Bowl back on their roster. Bell is likely on the back nine of his career, there’s reason to wonder about his character and even a great running back isn’t worth eight figures per year.

Brown’s sheer size is tantalizing and he’s coming off a solid late-season stretch with the Super Bowl champion Patriots, but the dude was never good prior to joining New England and he wasn’t particularly steady before getting into a groove late in 2018. Oakland isn’t paying him based on one good year, but one good stretch of games. And let’s not forget that Tom Brady gets the ball out at the speed of light. It’ll be a different story elsewhere.

The highest-paid safety in NFL history can’t cover receivers. Is that a problem? What’s with all of these run-oriented players cashing in? It’s 2019, and teams pass about 123 percent of the time. Collins is a massive liability in coverage, and there’s no way it makes sense to pay a box safety $14 million a year. The Redskins are once again out to lunch.