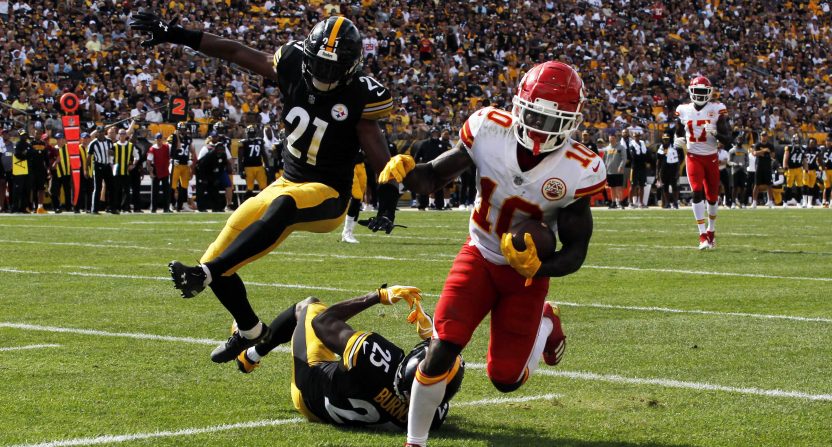 The internal troubles of the Pittsburgh Steelers jumped to a new degree this week than anyone could have reasonably predicted. Antonio Brown skipped a Monday practice and sent that infamous “trade me” tweet, not long after Pittsburgh lost a shootout to Patrick Mahomes.

Trade me let’s find out https://t.co/4OeepI78zy

Le’Veon Bell’s holdout is persisting and Bell has made no bones about enjoying life outside of the Pittsburgh gridiron, disregarding the harsh words thrown about before the season by the people who are paid to protect him. Everything about the Steelers seems peculiarly out of sync on the field even as the offense puts up its share of points when not committing catastrophic turnovers. A possibly warring locker room provides the NFL’s best ongoing drama.

Frustration built upon years of win-now mode, playoff disappointments and tragic unluckiness has now bubbled to the surface with that 42-37 loss to the Chiefs, in which the defense looked incapable of covering anyone and the sensational young Mahomes found every seam without ever coming close to giving the ball away. Tackles were missed and receivers were left open. Mike Tomlin tore into his defensive unit on the sideline during the disastrous first quarter to no great long term avail.

Kicker Chris Boswell, the stalwart and savior of 2017, kicking game-winning field goals seemingly every week as the Steelers tiptoed past inferior teams, again proved inconsistent at best in Week 2, drawing outright criticism from Tomlin and dropping one of the team’s final clear signals of stability. Even as the Steelers enjoy solid performances from James Conner and Juju Smith-Schuster, and as Roethlisberger steps back into Hall of Fame form after his mistake-prone Week 1, it doesn’t seem like everything is all there.

It’s been the defense that’s suffered the most. Defensive coordinator Keith Butler is getting outcoached on the regular at this point. The Chiefs were able to create mismatches and unfavorable one-on-ones all over the field, planting receivers in gaps that arise when a zone defense does not function well enough, compounded by the utter lack of athletic coverage linebackers.

Tight end Travis Kelce, just as “Steelers Killer” Rob Gronkowski has done in the past, roasted any linebacker, safety or cornerback tasked with guarding him. Pittsburgh has struggled to find ways to place safeties over the top without sacrificing space elsewhere in the formation. Without any considerable help from another defensive back, those tasked with covering Kelce had little chance.

As the Steelers compensated for this weakness by placing more manpower on Kelce’s post and seam routes in the middle, Andy Reid exploited other areas. He had secondary receivers like Sammy Watkins run combo routes alongside Tyreek Hill to place as much onus as possible on the Steelers’ individual defenders, who often looked confused as to which particular zone they were tasked with covering.

Pittsburgh has singlehandedly revealed every possible weakness with zone defensive schemes. Zone places difficult responsibilities on defenders, who must anticipate where to move and when to break on routes without risking too much. Lacking a deep roster of talented, starting-caliber NFL players, backed by elite difference-makers, the system is in constant danger of getting out-schemed.

You don’t have to watch the tape (which I didn’t; I don’t have NFL GamePass) to figure out how the Chiefs exploited the Steelers’ defense. It wasn’t hard to notice cornerback Artie Burns getting, uh, burned by Hill every way possible, and the lack of middle linebackers covering any significant ground.

One of the tenants of the Steelers’ zone over the years was the presence of a do-it-all, tackling-machine ILB running the show; James Farrior, Lawrence Timmons, and Ryan Shazier fit this description. Vince Williams and career special teamer Jon Bostic have been inadequate.

Replacing Shazier was a goal of the offseason after the Jaguars ripped apart a Shazier-less defense in last year’s divisional round. Pittsburgh went a direction most did not expect them to go in an attempt to innovate: They chose strong safety Terrell Edmunds in the first round of the draft and signed veteran Packers safety Morgan Burnett, hoping that by playing nickel packages for the majority of games and using safeties in the box more, it would offset the potential devastating weakness in the middle of the linebacking core.

It’s been mostly unsuccessful, particularly in the playmaking department. Aside from an interception of Tyrod Taylor in Week 1 and an ultimately meaningless forced fumble against the Chiefs, the defense has struggled to produce big plays and affect field position. Mahomes was magnificent in his own right, but the Steelers did everything they could to make him comfortable.

In a campaign that was supposed to be one of their last chances at glory with Roethlisberger and Brown, and likely their last chance with Bell, they are in danger of a lost season. Locker room tension could derail things quickly, and if the offense can’t keep putting up yards upon yards as they did against Kansas City, the team could end up losing more games than they win.