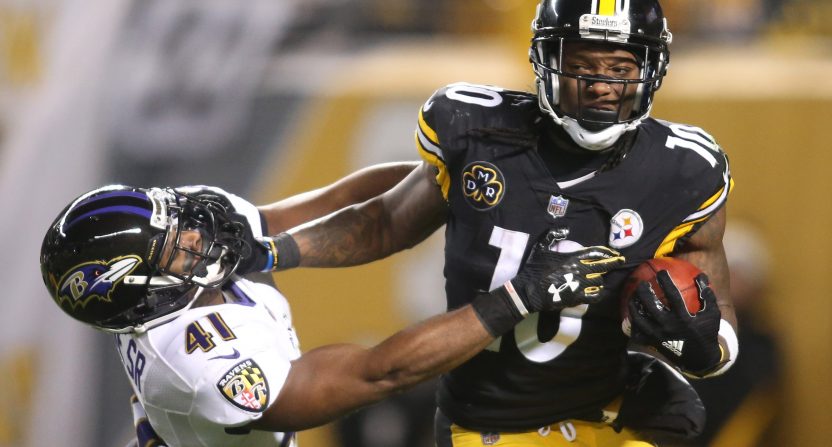 It was expected last October that the Pittsburgh Steelers would trade wide receiver Martavis Bryant in-season. There were even reports at the time that Bryant requested a trade. A week after those reports, Bryant took to Instagram to tell people that he was better than rookie teammate Juju Smith-Schuster.

Well, Bryant remained with the Steelers for the full 2017 season, but was finally traded during Thursday’s NFL Draft to Jon Gruden and the Oakland Raiders in exchange for a third-round pick (75th overall).

We have traded WR Martavis Bryant to the Raiders for their third round pick (75th overall).

Bryant was suspended for the entire 2016 season for violating the league’s substance abuse policy. But when there’s no doubting his talent, and he’s still just 26 years old.

The Clemson product joins Amari Cooper and Jordy Nelson in a big-name Raiders wide receiving corps for quarterback Derek Carr to throw to.

As for the Steelers, getting the 75th overall pick back for Bryant is a pretty great return.

Martavis Bryant wanted out of Pittsburgh and believed there was a good chance he'd get moved, even if Pittsburgh denied it multiple times publicly. Getting a 3rd for a 2019 free agent who wanted out of town and missed 20 games due to suspension is a good haul.

What a spectacular trade for the Steelers to get a 3rd pick for Martavis Bryant, who was not going to be here past this year. Can't believe somebody gave up a 3rd-round pick for him. @TheAthleticPGH

Bryant will get the chance to face his former team when the Steelers go to Oakland in Week 14 of the 2018 NFL season.