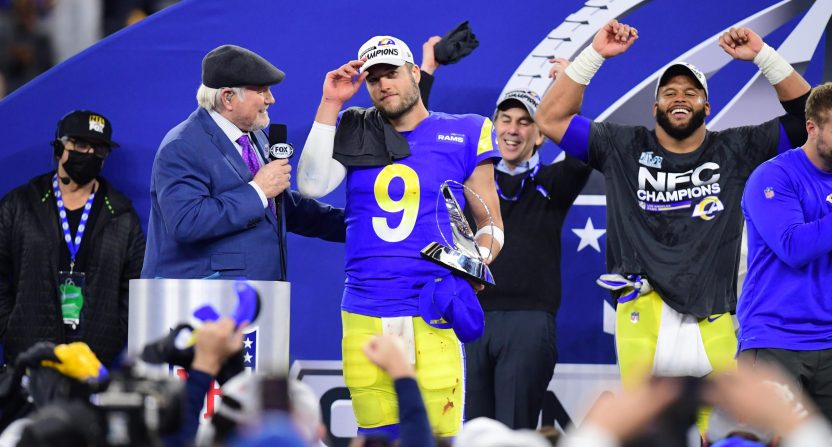 If you’re Aaron Rodgers, Russell Wilson, or Matt Ryan, you watched NFL Championship Sunday with keen interest. Matthew Stafford, a guy who had never won a playoff game until last month, now has a chance to be a champion in his first year with the Los Angeles Rams. It’s the second straight year that a high-profile veteran quarterback has switched teams and reached the Super Bowl. Tom Brady joined the Tampa Bay Buccaneers and immediately led that team to the title. Stafford could do the same.

It’s often said that the NFL is a copycat league. Usually that refers to play-calling and schemes. But Brady and Stafford have shown us the wave of the future. Quarterbacks don’t have to stay in an unhappy situation. Seize power. Control your destiny. Quarterbacks have leverage and more of them will use it to put themselves in favorable circumstances.

Stafford changed the narrative of his career by requesting a trade. He’s probably the same guy who was 74-90-1 as a starter for the Detroit Lions. The biggest difference is that the organization and players surrounding him are better. Stafford went from 0-3 in the postseason over a decade with the Lions to 3-0 in the playoffs with the Rams. It’s funny. One year to the date that Stafford was sent to L.A., he won the NFC Championship.

With his free agency, Brady enhanced the narrative of his career. As successful (six Super Bowl rings) as Brady was in New England, he shared the credit with Bill Belichick. Brady and Belichick are linked in the same way as Terry Bradshaw-Chuck Noll and Joe Montana-Bill Walsh. But Brady grew tired of Belichick’s controlling ways and wanted to see what life was like away from New England. He signed with the Tampa Bay Buccaneers and reinforced his status as the GOAT by leading them to a championship in his first year, defeating Drew Brees, Aaron Rodgers, and Patrick Mahomes along the way.

Rodgers must be observing all of this thoughtfully. He could be the next star quarterback to relocate. Almost any team that lands him would be an immediate Super Bowl contender. And if there’s a quarterback who needs to change the narrative of his career, it’s Rodgers. Yes, he’s the front-runner to win his fourth MVP award and has made the Green Bay Packers relevant for almost two decades. But his reputation has taken a hit. First, he lied about his vaccination status and then there were his bizarre appearances on The Pat McAfee Show. His odd year culminated with Green Bay’s disastrous home playoff loss to San Francisco.

Since winning Super Bowl XLV, Rodgers is 7-9 in the postseason. After this latest setback, no one knows if the 38-year-old Rodgers will return, retire, or demand a trade. Seems like it would be best for him to move on. The Denver Broncos and Pittsburgh Steelers have been the most frequently mentioned landing spots.

By switching teams, Rodgers gets a fresh start. Winning a second Super Bowl with a different team puts you in an elite club. Only Peyton Manning and Brady have done it.

Like Brady, Wilson has enjoyed a lot of success playing for one team and one coach his entire career. He’s won a Super Bowl and came close to winning a second. But there were conflicting reports on whether or not he requested a trade last year. And after experiencing his first losing season as a pro, you wonder. Especially given how strong the NFC West is. Wilson has a no-trade clause, so he can dictate where he wants to go. Plus, his salary cap hit for a new team in 2022 would only be $19 million, a bargain for a top quarterback.

Wilson should explore his options.

Of all the quarterbacks who might be desperate for a home, maybe it’s Ryan. He could enter the 2022 season as the second-oldest starting quarterback. Ryan, who turns 37 in May, is staring at another rebuilding year with the Atlanta Falcons under a second-year coach in Arthur Smith who’s only three years older than him. But the market for Ryan might be limited. He hasn’t played at a high level since 2018, and he hasn’t been an elite passer since his 2016 MVP season when Kyle Shanahan was his offensive coordinator and the Falcons almost won the Super Bowl.

Ryan could potentially opt out of his contract this year. There’s also the matter of his enormous $48 million cap hit on the Falcons which could be reduced with an extension. Smith might convince Ryan to stay. Let’s face it- the NFC South could be the league’s worst division with Brady gone from Tampa Bay and Sean Payton stepping away from New Orleans.

There’s never been a better time for veteran star quarterbacks. They have power. It will be interesting to see how they use it.