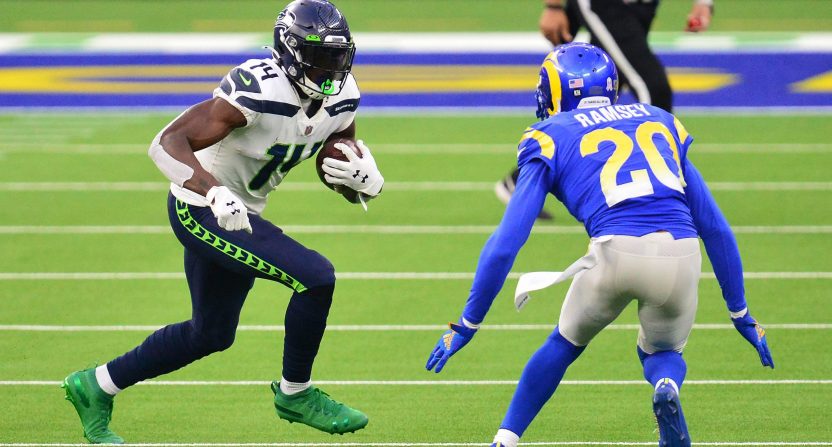 We’re just a few days away from the start of a 36-hour period that will be filled with six do-or-die NFL playoff games. Here are the top individual matchups on NFL wild-card weekend:

Diggs led the NFL in catches and receiving yards in his debut season with the Buffalo Bills, while Rhodes experienced a tremendous rejuvenation in his inaugural campaign with the Indianapolis Colts. With Kenny Moore II focusing mainly on Cole Beasley (if he’s able to play) in the slot, Rhodes is likely to be matched up with Diggs more often than not. The 30-year-old three-time Pro Bowler surrendered just 6.9 yards per target into his coverage in 2020.

Meanwhile, Ramsey surrendered just 5.0 yards per target into his coverage in a fourth consecutive Pro Bowl campaign with the Los Angeles Rams. He’s one of the most talented cornerbacks in the sport, and — while Troy Hill focuses mainly on Tyler Lockett in the slot — he’ll have his hands full outside with the athletically incredible Metcalf when the Los Angeles Rams take on the Seattle Seahawks. The sophomore second-round pick posted 1,303 yards and 10 touchdowns in 2020.

The rookie Washington Football Team edge defender says “I want Tom,” while Tampa Bay Buccaneers head coach Bruce Arians has already cautioned Young to “watch what you wish for.” But even without the mild war of words, this would be fun. Brady has had trouble with strong pass-rushers in big playoff moments in the past (particularly in facing NFC East opponents), and Young has been on fire down the stretch for the WFT.

David is one of the best off-ball linebackers in the NFL and the leader in the middle for a Tampa Bay Buccaneers team that led the NFL in yards per rush allowed, rushing yards per game allowed, and rushing touchdowns allowed in 2020. Gibson, who averaged 5.4 yards per carry in his final five games as a rookie, will be the key to Washington potentially putting up a fight on Saturday night.

There are a lot of great matchups in Sunday’s Baltimore Ravens-Tennessee Titans meeting, including superstar back Derrick Henry vs. a strong defensive front, and superstar quarterback Lamar Jackson vs. Mike Vrabel’s defensive mind. But the best matchup might be between Tennessee’s excellent young receivers and Baltimore’s superb veteran cornerbacks. The headliners are Brown and Humphrey, but Peters is also likely to draw plenty of matchups with the two-time 1,000-yard sophomore.

Neither Brees nor Mack have been 100 percent healthy and/or at their best all season, but the future Hall of Fame quarterback performed well in a Week 17 win, and the potential Hall of Fame pass-rusher is desperate for his first-ever playoff win. Considering that the Chicago Bears are a lot worse on paper than the New Orleans Saints, Mack will need to be at his best and help his defensive front get to Brees frequently.

Meanwhile, the rookie Willis and the highly-paid veteran Conklin will be charged with protecting Baker Mayfield in his first career playoff start for the Cleveland Browns against a fierce Pittsburgh Steelers defensive front. Leading the way for that mighty Steelers pass rush is Watt, who registered a league-high 41 quarterback hits this season, and might be the Defensive Player of the Year.

Meanwhile, when the Steelers are on the field, the key for veteran quarterback Ben Roethlisberger will be to beat an elite cornerback in Ward, while avoiding an elite pass-rusher in Garrett. Cleveland has a bottom-10 defense in terms of DVOA, but Garrett can be a game-changer and Ward can help lock down on a mistake-prone receiving corps.