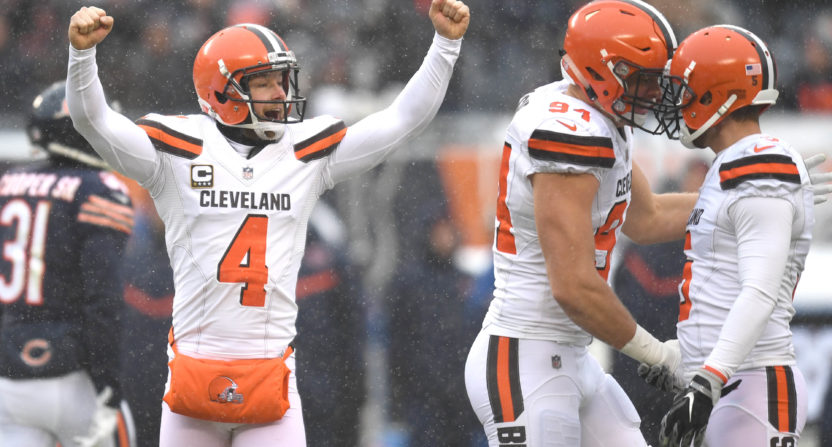 The Cleveland Browns have been on a historically bad run in recent years, posting consecutive seasons with a record of 3-13, 1-15, and 0-16. There is hope for the future, however, if only because things can’t possibly get worse. A solid NFL Draft, which included the arrival of quarterback Baker Mayfield, cornerback Denzel Ward, and running back Nick Chubb, has some people thinking the Browns can rack up a couple victories in the 2018-2019 season.

And then there are some people who are thinking way bigger. Per ESPN, Las Vegas sportsbooks have noticed a growing trend amongst bettors to pick the lowly Browns to win the AFC North, the AFC title, and, if you can believe it, even the Super Bowl.

MGM has the Browns down at 60-1 to win the Super Bowl but that isn’t stopping people from putting them down as winners, even more than the Atlanta Falcons, Kansas City Chiefs, and Jacksonville Jaguars, all of whom made the playoffs last season. Over at Caesar’s Palace, a sportsbook manager told ESPN that there are more bets on the Browns to win their division than the other three teams combined. He also noted that “only the Raiders and Steelers have more bets to win the AFC [than the Browns]. The public likes the Browns, and I’m not sure why.”

Who knew that a 0-16 team could have a bandwagon? The Browns, perennial also-rans of the league, have somehow figured out a way to get so bad that everyone suddenly starts losing their minds as soon as they show a slight improvement.

Vegas has been trying to use the Browns in recent years to attract “sharp money,” large bets from individuals or large groups. To do so they’ve been inflating the lines in games involving the Browns, which worked in getting more people to bet on them. However, according to one Vegas expert, it looks like the trend will flip this season.

“I almost guarantee you that is going to flip this year,” Rood added. “I think we’re going to see more sharp money come against the Browns this year and maybe more public money on the Browns this time around.”

One way or another, expect to hear a whole lot of people pulling for the Browns this season. Especially if you’re in a Vegas sportsbook.