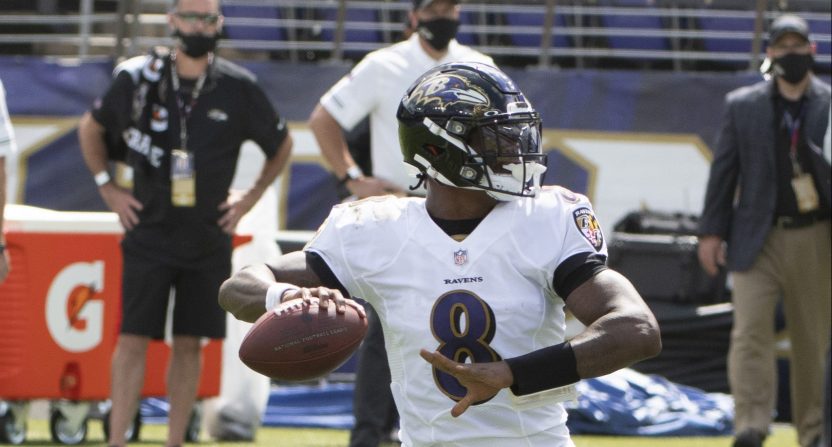 We’re just over the halfway point of the NFL season, so it seems like a good chance to check in on the latest Super Bowl 55 champion odds.

The Kansas City Chiefs remain the clear favorite, and for good reason. They’re the defending champions, they’re 8-1, they have an NFL-best +103 point differential, and they have the most valuable player — quarterback Patrick Mahomes — at the most important position in sports.

The Chiefs are followed in the title odds by the undefeated Pittsburgh Steelers (+500), and a New Orleans Saints (+700) team that shockingly annihilated the Tampa Bay Buccaneers on Sunday Night Football. Despite suffering that primetime shellacking, the Bucs (+800) still come in at fourth on the odds, followed by the Baltimore Ravens (+850).

Here are the odds of each team, according to Bovada:

The Ravens are flying a bit under the radar right now. That’s likely due — at least in part — to these three reasons:

1. The Pittsburgh Steelers are also in the AFC North, and are 8-0.

2. Lamar Jackson has been very good, but the numbers aren’t near the level of his ridiculous 2019 MVP season.

3. People still remember the Ravens getting steamrolled by the Titans last January, making it harder to buy in.

And that’s all understandable. But this is still a really good, title-capable football team. They have two losses- vs the Chiefs and vs the Steelers. Or, two teams that have one combined loss and are the Super Bowl favorites. The Ravens also beat the Browns (who are 5-2 otherwise) by 32 points, and they had a 14-point road victory on Sunday over the Indianapolis Colts (who are 6-2 otherwise, and looked awesome on Thursday night vs the Tennessee Titans).

The Ravens still have another level they can reach, particularly with an offense that ranks 23rd in DVOA; their defense ranks fifth and their special teams unit ranks first. Tight end Mark Andrews hasn’t had a touchdown in over a month and has only topped three catches in a week twice this season. The rushing situation has been a game of musical chairs, with rookie running back J.K. Dobbins (averaging 5.7 yards per carry) finally getting more touches in recent weeks. Not only should the offense perform better the rest of the way; it has the chance to be really good again (after all, the unit ranked No. 1 in DVOA last season).

As for the concern about winning the division- only one team in each conference gets a first-round bye this season, and the home/road stuff doesn’t mean nearly as much in empty (or near empty) stadiums.

The Tampa Bay (38-10) and Minnesota (28-22) losses really, really hurt the perception of the Packers. The Buccaneers game showed that an elite pass-rush can significantly disrupt what Aaron Rodgers and the Packers do on offense. And the Vikings game showed that the Packers’ run defense can be shredded, with Dalvin Cook running for three touchdowns and 163 yards. The Packers have some real flaws, and those two games showed that perfectly.

Still, just about everybody in this league has flaws, especially in the NFC. And the Packers still have Rodgers, Aaron Jones, and Davante Adams to form an offense that is absolutely lethal when right. Rodgers is the league’s highest-rated passer and has a legitimate chance to win the NFL MVP. It’s also likely that they learned a lot from the Bucs game and would make some offensive adjustments vs such defenses come January.

So similar to the Packers, as the odds would certainly suggest. An elite quarterback playing at an MVP level in Russell Wilson, leading a high-power offense. But major questions on the defensive side of the ball.

The Seahawks’ pass defense has allowed an NFL-high 2,897 yards, and 8.1 yards per attempt (fourth-worst). They have allowed at least 23 points in every game, and are allowing an average of 30.4 points per game (third-worst). It’s really hard to win Super Bowls that way, and they would surely slip up (perhaps early) if the defense performed to this level in January.

However, their defense shouldn’t be *this* bad, and they have been hit hard by injuries. 2019 All-Pro safety Jamal Adams just returned in Week 9 after being out since Week 3, for example. If the defense can be even below-average instead of absolutely terrible, they can compete for a Super Bowl with Wilson and this offense that’s averaging an NFL-best 34.3 points per game (the Chiefs are second at 31.8 points per game).

Now for the deep sleeper. The Cardinals are probably a year away from jumping into the realistic title tier, but they have the pieces in place to potentially make a run right now. They showed that off with a Week 7 victory over the Seahawks. But they also showed their flaws and youth in a 34-31 loss at home on Sunday against the Miami Dolphins, who featured a rookie quarterback – Tua Tagovailoa — making his first career start.

Arizona really isn’t that different than the Packers and Seahawks from a statistical and roster standpoint. On offense, they have an electric second-year quarterback — and dark horse MVP candidate — in Kyler Murray, a dangerous rushing duo with Kenyan Drake and Chase Edmonds, and an elite wide receiver in DeAndre Hopkins. The metrics think that this is a solid football team on both sides of the ball; the Cardinals rank ninth in offensive DVOA and 10th in defensive DVOA.

But experience, especially in January, can be a very real thing. That’s where we have no idea, and it’s what separates the Packers and Seahawks from the Cardinals on the surface. Still, the talent is certainly there for the Cardinals to possibly make the leap sooner than expected, and you don’t have to go through a team like the Chiefs in the NFC.