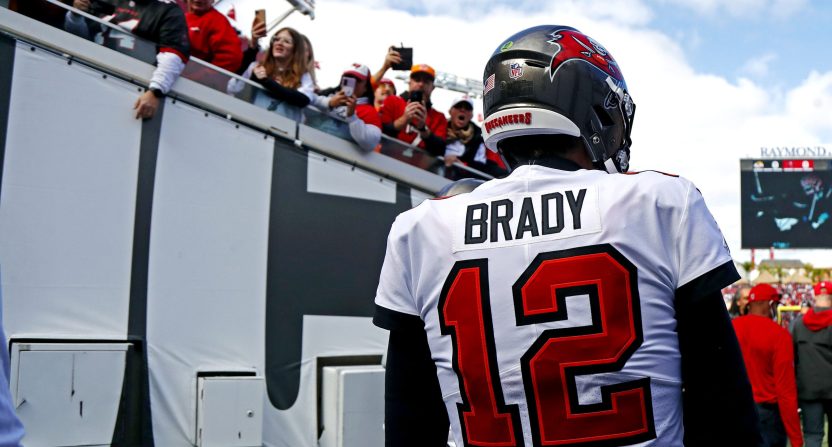 Tom Brady officially retired on Tuesday, and it did not feel inevitable. Brady is not a player you picture retiring. He’s an inevitability, the one athlete who is just always there, winning. When reports arrived on Saturday that all the credible NFL reporters were wrong and Brady was not retiring just yet, I thoroughly believed that Brady would be back next season, like he always is.

His career, as you know, is unlike any in professional sports. He always managed to win, and I don’t think we’ll ever really know how or why. At age 44, he was an MVP candidate. That is completely absurd and unprecedented, and not something that we’ve fully grasped yet.

There are, of course, lots of explanations for Brady’s success. He was an excellent and flawless quarterback who got through progressions faster than anyone. He knew how to use and elevate the talent around him. In big games, he showed no nerves and never failed to perform at his highest level. His arm strength never wavered, and his precise accuracy was always one of his best assets. He rarely made mistakes, especially in important games and moments.

His circumstances were always very good, an obvious prerequisite for making 10 Super Bowls and winning seven. He played for the best coach of all time in Bill Belichick, and enjoyed the services of the best tight end ever (Rob Gronkowski) and for a few years, one of the greatest wideouts ever in Randy Moss. His offensive lines were usually good or elite, and his defenses were always very good. The stability around him helped immensely.

But for all the explanations we can offer, they don’t suffice. There have been lots of great teams in NFL history that did not have success. A lot can happen in winner-take-all NFL playoff games. There are weird, random mistakes from bit players, or some specific opposing tactic that wins the day. You never know who will make the big kick, or even win an overtime coin toss. Brady managed to win more of those moments than anyone, by far.

He got lucky sometimes. But there has to be something else at play when the same guy pulls it out seemingly every single time. Some would like to ascribe it to some extra drive or motivation, the cold-blooded “it” factor. That doesn’t do enough for me. Every great quarterback has ridiculous competitiveness. Brady didn’t walk his team down the field in the biggest moments through sheer will. If that were possible, inferior QBs would have pulled it off too. I’d be lying if I said I had the answer.

After a team loses a big game, you often hear the sentiment, “you just don’t know when they’ll be back.” That just never happened for Brady. You knew he’d be back, somehow. Aaron Rodgers has spent this past decade trying and failing to find his way back to the Super Bowl. He’s had some bad luck (hi, Brandon Bostick), and some bad performances in NFC Championship games. He won one Super Bowl as a young quarterback, proceeded to win four MVPs, and stalled out in the playoffs every time.

The weird thing? Rodgers is probably a better pure quarterback than Brady. He consistently put up better numbers and made the most of worse situations. He made crazy throws on the run that we know Brady couldn’t dream of. Watch the two QBs without any context and I bet you would choose Rodgers for his superhuman ability to hit passes that no else can. Look at the stats, both basic and advanced, and they will favor Rodgers.

But Brady is the greatest QB of all time, and no one has any valid reason to dispute it. This is a weird phenomenon unique to football. Luck, coaching, and supporting casts are important. It’s not like Rodgers has been starved for talent, though; he usually has good o-lines, and he’s played with Davante Adams since 2014.

There is a gap between the performances of Brady and Rodgers in big games and moments. Ultimately, Brady always knew how to do just enough to win. I’ve never liked that construction of things, because it ignores a lot of the factors that go into the result of a game and focuses on very specific moments. Sometimes, as we know, QBs win despite playing well, and vice versa. But I can think of no better way to describe what Brady could do. There’s something ineffable and indescribable about his success. It just happened, and it was inevitable.

His retirement, ending what has to be the greatest career in American sports history, is unsatisfying in that he retired at his peak. Usually, this is the most satisfying type of retirement. We never have to witness a great athlete with his or her powers gradually stripped away, aging into something lesser. We watched Michael Jordan, the most immortal-seeming athlete ever, play a mediocre bench role on a bad team. We’re not going to have to do that with Brady.

But one of the greatest and most impressive things about Brady is his longevity. He got better with age. Athleticism was always his weak point, so when he lost mobility, nobody noticed because it didn’t matter. His strengths were only amplified. Thus, he stood apart as one of the best QBs in the league, in an era of high-volume passing, at the age of 44. We will never know how long he could have gone.

The other NFL teams will not mourn Brady’s retirement, because they’re surely tired of his guaranteed place in the big games. It seemed unfair that he was always there, somehow. He was never truly dominant, but at the same time, he always was.