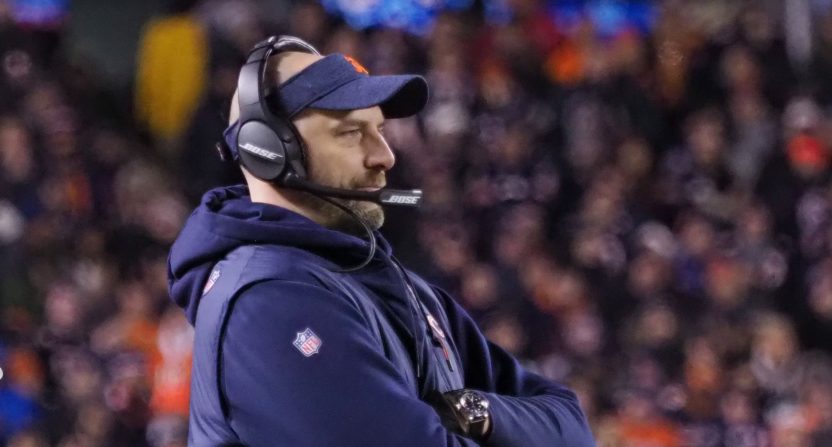 This Weekend in NFL Stupid highlights the dumbest moments and decisions in football throughout the season. Coming out of wild-card weekend, we give you the 12 stupidest things from the four games on the docket, with three poor Matt Nagy decisions leading the way.

1. Nagy should have called timeout as soon as Philadelphia gained a first down at the Chicago 2-yard line with 1:50 on the clock. Had everything been the same from that point forward, the Bears’ final possession would have started with about 1:20 on the clock, rather than 48 seconds.

2. Nagy should not have used his final timeout after Mitchell Trubisky completed a pass to Allen Robinson that set Chicago up on the Philly 33-yard line. That’s when you spike the ball. You saved yourself about seven seconds. Not worth it.

3. That would have allowed the Bears to run the ball for gain a few easy yards on a short pass on the play before Cody Parkey’s fateful final field-goal attempt. But instead, they threw up a low-percentage deep pass that landed incomplete, leaving Parkey more yardage than anyone would have preferred. Still, they could have run a safe play to the sideline instead of that. Had the Bears done everything above, Parkey might not have needed to come out at all.

4. Prior to a fourth-down play with 56 seconds remaining in a game they trailed by five, the Eagles used a timeout with the clock stopped. Yes, they scored on the play, but that just can’t happen. Had they not scored, that might have been the difference between getting the ball back and not.

5. Rather than going for it on 4th-and-1 while trailing by nine in the second half, the Ravens attempted a 50-yard field goal. Your odds are probably just as good at converting there, especially with Lamar Jackson under center, and you don’t give away eight extra yards if you fail. There’s also a much more substantial reward on the table. Just ridiculous.

John Harbaugh and the Ravens are about as (intelligently) aggressive in short-yardage as it gets. When they’re not comfortable going for it on fourth-and-1 on a windy day and prefer a 50-yard field goal down 12-3 with 19 minutes to go…

6. In what was shaping up to be a field-position game, the Cowboys attempted a 58-yard field goal instead of just going for it or punting on 4th-and-10. It’s as simple as this…

Just because a kicker has made kicks from a certain long distance or beyond doesn't mean you attempt from said distance every time. https://t.co/ABaYjMilO5

7. Down 14 points with just under 11 minutes remaining, the Texans kicked deep. I’m so tired of coaches failing to realize that the difference between a failed onside kick and a deep kick is only tantamount to a couple first downs. It’s always worth going onside when you’re desperate, especially at a point in which you can still execute a surprise onside kick.

8. Down six with 1:59 remaining, the Ravens kicked deep. See above.

9. With the game still in reach, this was a garbage fourth-down play call from Bill O’Brien. Low-percentage pass out of an empty set on 4th-and-1? Come on…

10. There was also this from O’Brien…

The way Indy's offense is performing, not sure about punting near midfield on a 4th-and-3 down 21 in the second half.

11. Why shouldn’t a coach be allowed to challenge that a penalty occurred? At least when it’s a clear-cut penalty that doesn’t require judgement, like this facemask which was missed at a critical juncture in the Colts-Texans game.

Potentially a face mask foul on IND. Why this wasn't called, in the liveblog #INDvsHOU https://t.co/CfOLwcDJmi https://t.co/69b6Bcdj8Q

12. And finally, what the shit was this?

This was the "onside kick" by the #Seahawks down 2-pointspic.twitter.com/GT8BF2gFWx