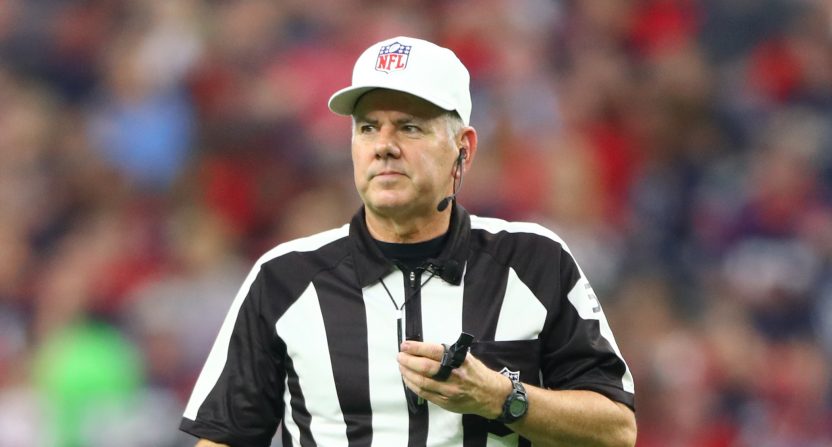 This Weekend in NFL Stupid highlights the dumbest moments and decisions in football throughout the season. Coming out of conference championship Sunday, we give you the 14 stupidest things from the wildly entertaining but nevertheless extremely idiotic games.

1. Let’s get the obvious out of the way. Yes, it might have been the worst non-call in NFL history. We can all agree, and there isn’t much more to add at this point except that EVERYTHING SHOULD BE REVIEWABLE.

Happy that the Rams will play in the Superbowl, but the Saints just got robbed. How is that not pass interference? It's not even debatable 😂😂#LARvsNO pic.twitter.com/ph8rL2HAFI

Officials missed a call that could have been pass interference, helmet to helmet, unnecessary roughness, face guarding, any of them. Instead it was none of them.

The game, and legacies, were changed.

2. Dee Ford cost his team a game-clinching interception because he was lined up in the friggin’ neutral zone. Just take a look, bud…

Lining up in the neutral zone is maybe the dumbest penalty you can commit. Just check. Every snap.

3. On most other days, this would have been the worst call of the day. No, this is not roughing the passer. Without that call, New England is in a third-and-long. Instead, they got a free 15 yards on a critical fourth quarter scoring drive.

This brutally violent act by the Chiefs’ Chris Jones on Tom Brady drew a roughing the passer penalty. There’s simply no room in the sport for such gruesome violence. Please do not allow small children to watch this video. #NEvsKC pic.twitter.com/WlHo0ICbM1

4. The Rams settled for a game-tying field goal even though they were just inches from the end zone with five minutes remaining. That decision might have cost them the game if not for the missed DPI.

ESPN's Win Probability (WP) model says the Rams likely made a major error by electing for a field goal attempt on 4th and goal from the Saints' 1-yard line. The WP for the FG attempt would be 43.2%, while the WP for going for it would be 55.3%. The Rams… https://t.co/ynvPliYNAI

5. But it might not have come to that if this facemask wasn’t also missed by the officials. Tough day for Bill Vinovich and crew.

6. Down three points with 45 seconds left, the Rams called timeout to stop the clock ahead of a first down at the 33-yard line. You always spike it there and save the timeout. The down isn’t likely to matter, but the timeout is.

Goff rushed that last throw because he was desperate not to get sacked because the Rams were out of timeouts. https://t.co/Lr45bOq7YT

7. The Rams essentially settled for 48- and 57-yard field goals in the fourth quarter and overtime. In this case it didn’t cost them, but that’s a mistake coaches make far too often. Field goal range doesn’t mean you’re guaranteed three points.

8. Why did an apparently healthy Todd Gurley carry the ball just four times for the Rams? I mean, the guy was an MVP candidate most of the year and C.J. Anderson averaged just 2.8 yards per rush. A little ridiculous there, Sean McVay.

9. As the Saints were setting the tone early, Rams defensive lineman Michael Brockers jumped offside on a hard count on a 4th-and-2 in his own red zone. The whole damn world knew that hard count was coming. Can’t happen. Man, the Rams sure were lucky to win this game.

10. On a 3rd-and-9 from the New England 22-yard line, Patrick Mahomes took a 14-yard sack. That took his team out of field-goal range in a game that ultimately was decided in overtime.

11. You can’t run backwards like that, Tyreek Hill. Dude took an 11-yard loss inside his own red zone, which was made worse by a penalty for an illegal block that must not have helped Hill very much.

The Chiefs just fielded a punt at the 18-yard line and find themselves starting at their own 4-yard line. Jeez.

12. Why give this to Rex Burkhead when you’ve got Tom Brady’s sneaking ability and big James Develin? The Pats are lucky this wasn’t a turning point.

13. In the modern game, overtime rules aren’t fair unless they guarantee both offenses the ball at least once. How different would the Patriots dynasty look if they didn’t win the overtime coin toss Sunday or against the Falcons in Super Bowl LI? Shame the opposing team never got to run an offensive play in either case.

14. But that’s exactly why the Chiefs should have taken one more shot in regulation. Down by three, they had the ball at the New England 21-yard line with 16 seconds left, and they attempted only one pass.