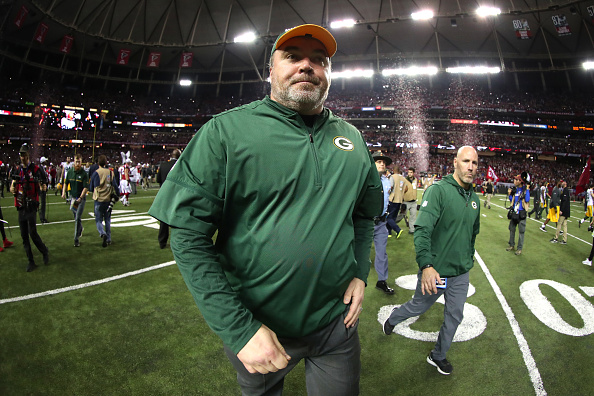 If you live to see the conference championship, you’re not a stupid team. But that doesn’t mean the Green Bay Packers, Atlanta Falcons, Pittsburgh Steelers or New England Patriots are immune to dumb football. A recap of stupid from the penultimate NFL Sunday of the year…

Down 17-0 in the second quarter, against the highest-scoring offense in football, the Packers punted on a 4th-and-2

I don’t care if it’s still the first half and I don’t care that you’re on your own 33-yard line. You can’t afford to give that offense another possession without putting points on the board. Your defense is in terrible shape, you’ve yet to stop them and you’ve got the best quarterback in NFL history. A 4th-and-2 is at least a 50/50 shot, which is worth the gamble in order to keep one of the most crucial drives of the game alive.

Instead, the Packers punted the ball away, sacrificing another possession in a game in which they’d have to go blow-for-blow with an opponent that was on fire.

After the Packers took an unnecessary roughness penalty on Atlanta’s first touchdown, the Falcons kicked off into the end zone

I know, I know. The Falcons still won by a large margin. But that doesn’t make this any less stupid. Atlanta had a chance to gain some serious momentum very early, and that penalty against Ha Ha Clinton-Dix gave them a free shot at an onside kick, or at least a chance to bury the Packers deep with a pop-up kick inside the five-yard line.

Why in the world would you blast the ball into the end zone from midfield? By doing that, you forfeit a chance at a second consecutive possession and give your opponent the ball at the 25-yard line, even though a failed onside kick would only cost you about 10 or 15 yards in field position on defense. It’s just nonsensical.

I wrote about this back in November. It’s a major pet peeve. Why are coaches so well-paid and supposedly so dedicated to the job, and yet so ignorant when it comes to obvious situations like these?

Nothing particularly stupid about the decision to give Atlanta the touchback, because it did appear as though Jalen Collins’ leg was in the end zone when he gained full possession of the ball. What’s stupid is the Fox broadcast team never explained or even analyzed the game’s most controversial and heavily-debated play.

Is nobody in that truck or booth on Twitter? And if not, why? Talk about being out of touch. These networks go out of their way to include useless social media elements in their broadcasts in contrived efforts to play to younger viewers, and yet they fail to address the social media masses when it matters most.

Plus, what the hell are they paying Mike Pereira for?

This wasn’t unforgivably egregious, but there wasn’t a lot of stupid in the Steelers-Patriots game. Just one team badly outplaying an inferior team that was without its best player.

But still, Pittsburgh. You’re down by three scores with only 13 minutes remaining. If you make a big comeback, chances are you’re going to need those valuable timeouts. So why can’t you call a damn play and get the snap off in 40 seconds?