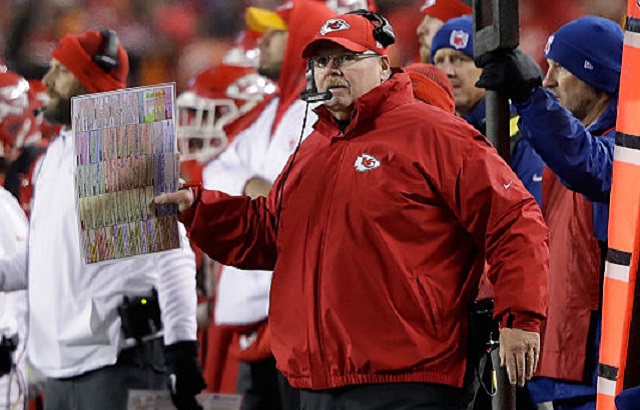 You’d think that teams playing in the NFL Divisional Playoffs would be less likely to do stupid things. That’s not entirely true. Playoff teams provided plenty of material for This Weekend in NFL Stupid, starting with déjà vu in Kansas City.

The Chiefs thought there was a fifth quarter… again

Andy Reid and the Kansas City Chiefs will never learn. One year ago on this very weekend, Kansas City’s offense crawled down the field at a laughably slow pace while in need of multiple scores in the fourth quarter of a Divisional Round loss to the New England Patriots. I documented the whole thing in this exact spot.

Sunday against Pittsburgh, the Chiefs did it again.

Down 18-10, they got the ball back from the Steelers with 9:49 to play in the fourth quarter. Now, a clock-eating touchdown drive down seven is somewhat acceptable, but when you’re down eight, you have to try to score as quickly as possible because two-point conversions are 50/50 shots. Down eight, your offense has to act as though it is dealing with a two-score deficit.

Instead, the Chiefs put together a 13-play scoring drive that sucked more than seven minutes off the clock. And then they failed to pick up the two-point conversion. And since they had already wasted two precious timeouts, all the Steelers had to do on their ensuing possession was pick up a single first down to cement the game.

The clock ran after seven Chiefs plays on that drive. And on those occasions, here’s how many seconds Alex Smith and Co. let come off the 40-second play clock…

The whole thing was excruciatingly stupid, and it’s not the first time Reid and Smith have committed clock-management malpractice.

The Dallas Cowboys had the Green Bay Packers just where they wanted them. With just under a minute to play in the fourth quarter of a three-point game, Dak Prescott had just completed an 11-yard pass to Jason Witten to give Dallas a 1st-and-10 at the Green Bay 40-yard line. The offense was rolling, and they were already on the edge of field-goal range with a timeout to spare. There was no need to panic, no need to rush.

For some reason, while still out of field-goal range and with a timeout in their back pocket, the Cowboys wasted a down by spiking the ball with 48 seconds on the clock. They could have taken an extra 10 seconds and ran an actual play, or they could have used that timeout and adjusted from there.

Instead, the Cowboys clocked it, leaving them with just two plays to either get into field-goal range or pick up a fresh first down. And without that first down, they ran the risk of giving Green Bay the ball back with too much time on the clock.

Sure enough, Dallas failed to pick up the first down on those two plays. They did get into field-goal range, but with the clock stopping on each of those next two plays, they were forced to kick it with 40 seconds still on the clock. They never used that timeout, which confirmed just how unnecessary the spike was.

What did Aaron Rodgers think when Dallas tied the game in final minute? Rodgers: "A little too much time on the clock.”

Dan Bailey made the field goal, but the Packers made the most of the 35 seconds Dallas left them with. Aaron Rodgers drove them into field-goal range and Mason Crosby converted for the win.

In New England, the Houston Texans were the largest playoff underdog this century. There was no room for error, or an abundance of conservative calls. Not only did they make too many errors, but their conservative approach cost them a chance to truly make a run at the Patriots.

Look, they weren’t going to convert all of those, but they’re worthwhile “gambles” when you’re trailing a superior team on the road and the alternative is simply losing a chance at three points or giving a good defense worse field position. And I put “gambles” in quotation marks, because most of these fourth-down plays would have been 50/50 propositions, or close to it. These weren’t Hail Marys.

The Texans played scared in a nothing-to-lose game, and it might have cost them a chance.

Dallas being too cute

The Cowboys were the No. 1 seed in the NFC because they spent the season sticking to the plan. They were disciplined when it came to running an offense with a middle-round rookie quarterback. Ezekiel Elliott was the centerpiece, and they controlled games that way.

But they got away from Elliott and tried to be cute on three particular occasions Sunday against Green Bay.

1. First drive of the game. You’re trying to set the tone. It’s 3rd-and-2 at the Green Bay 32-yard line. Zeke is a stud. Instead of giving it to him, you have Prescott throw a low-percentage pass into double coverage. Lucky it wasn’t picked.

1-A. If you’re going to do that on third down, you better be planning on going for it on fourth. But no, the Cowboys settled for a 50-yard field-goal attempt.

2. Final possession of the first half. Not only are you trying to score in order to make it a one-score game before the end of the half, but you want to eat clock so that the Packers don’t have time to respond before halftime. You reach the Green Bay 15-yard line with just over a minute remaining, and you proceed to throw three consecutive passes — all of them incomplete. No effort to work in your best offensive player, despite possessing a timeout. They’d settle for a field goal and Green Bay would indeed have a shot on offense before halftime.

3. Down 15 in the third quarter, you had a 2nd-and-1 inside the Green Bay red zone. Elliott was on fire, having picked up 40 yards on four carries on that drive. And yet you had Prescott do whatever the hell this was…

KISS, Cowboys. Keep it simple, stupid. It’s what got you here.

That weird penalty on Brice Butler

The Cowboys wide receiver was flagged for “unsportsmanlike conduct” for entering the huddle and then not participating on the ensuing play. A rare call, but a rule that exists for a reason.

My postgame video on #GBvsDAL:

The Brice Butler penalty explained & the huge call the officials got right in a crucial moment. pic.twitter.com/2TCXnymVy6

So what’s stupid? The fact the Cowboys were tragically unprepared on offense and that this was one of several substitution-based penalties against them, as well as the fact that’s a 15-yard personal foul. There was no malice and no harm done, so it’s ridiculous that the call cost the Cowboys a total of 37 yards (a 22-yard gain plus the penalty) in a close playoff game.