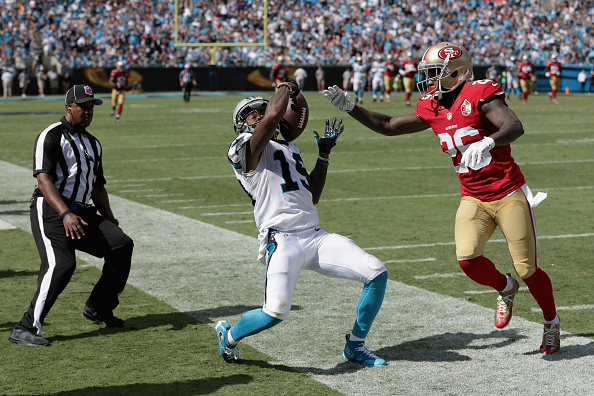 This Weekend in NFL Stupid highlights the dumbest decisions in football throughout the season. And believe it or not, after a really stupid Week 1, there wasn’t as much stupidity in Week 2. That’s good news for the NFL, bad news for us.

Still, there were some foolishness this week. Here’s a summary, starting with two really ridiculous calls from the men in black and white.

**In Carolina, this was apparently a catch…

Think about some of the catches we’ve seen overturned over the years as a result of the NFL’s strict policy regarding receptions, and look at that. Ted Ginn is bobbling the hell out of that, and then he flat-out loses it while coming down!

How on earth is that a catch by Ginn? I don't get it

Wow, somehow that is ruled a catch by Ginn. Again, wonderful throw by Cam.

Hell of a throw by Newton, but that's not a catch. Ginn didn't secure it to the ground. #49ers

**While in Cleveland, this was apparently worthy of a 15-yard penalty…

That “taunting” penalty cost the Browns a 20-yard gain that would have set them up on the Baltimore 10-yard line with 21 seconds to play. Instead, they were back on the 30 and forced to attempt what was basically a Hail Mary. It might have been the difference between a win and a loss, despite the fact it’s crystal clear that Terrelle Pryor was innocently trying to flip the ball to the official.

What an incredible overreaction in a crucial moment. The official failed to use reasonable judgment or decipher intent, and that might have cost Cleveland a win.

This is taunting? Absolutely atrocious…he was handing ball to ref. Wasn't even that ref that called it. #Browns pic.twitter.com/48oMQImfVA

"if that's taunting, that's over officiating" – Doug Deiken on @BrownsRadio

Like, for example, wasting an extremely important second-half timeout on a fourth-quarter “play” intended to draw the Jets offside using a hard count. (It didn’t work.) A few minutes later, Ryan’s comically underprepared team failed to get a snap off before the two-minute warning despite having 16 seconds to do so. Had the Bills executed properly in both situations, they would have gotten the ball back down by six with well over a minute to play. Instead, they had just 10 seconds.

What good does a 13-point lead do you in that moment? And yet after Matt Forte scored to put the Jets up 36-24 late in the fourth quarter, Bowles had Nick Folk kick the extra point. So when the Bills scored with 1:22 to play, they found themselves a recovered onside kick and a touchdown away from winning the game, rather than tying it.

The Raiders head coach, who won thanks to a risky two-point gamble last week and gained extra street cred with a fourth-down gamble that resulted in a touchdown Sunday against the Falcons, climbed back into his shell at an inconvenient time.

With the Raiders trailing the Falcons by a touchdown with 2:12 to play, Del Rio opted against an onside kick despite the fact the Atlanta offense had been rolling over his defense all day. Sure enough, the Falcons were able to pick up a first down on the ensuing possession, taking 2:10 off the clock and leaving the Raiders with just two seconds for a Hail Mary-type final play.

**And finally, in Washington, Kirk Cousins decided this was a good idea…

Better luck to all involved parties next week. Especially Ryan, because we wouldn’t want to see him to try find yet another scapegoat.