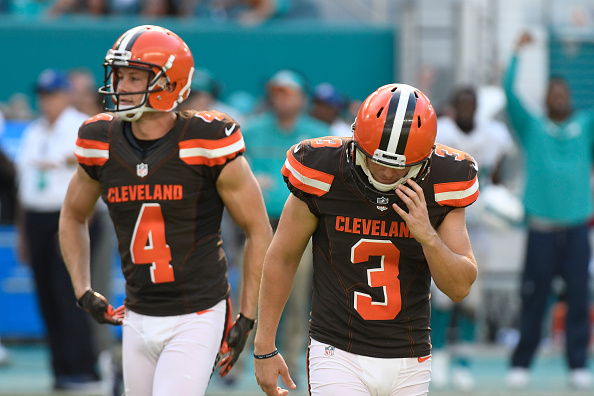 This Weekend in NFL Stupid highlights the dumbest decisions in football throughout the season. This week, we start with kicker-related developments involving two of the league’s dumbest teams.

Did the Cleveland Browns cheap out on a kicker and then force said kicker to attempt a tougher-than-necessary field goal with the game on the line?

The Browns lost regular kicker Patrick Murray to a knee injury on Friday. They replaced Murray with Cody Parkey (82.6 percent for his career), not Robbie Gould (85.4 percent), because — according to Armando Salguero of the Miami Herald — Parkey came cheaper.

“Gould has played 11 NFL seasons and Parkey is in his third,” wrote Pro Football Talk’s Michael David Smith, “which means the minimum salary to sign Gould would be about half a million dollars more than the Browns are paying Parkey.”

The Browns insist that money didn’t play a role in their decision to sign the less successful and less experienced Parkey instead of Gould, but it’s hard to buy that considering their Moneyball approach.

Parkey.
For the WIN.

But the worst part is the Browns still could have won anyway, but might have cost themselves dearly by being far too conservative on their final chance in regulation.

See, after Miami turned the ball over on its own 27-yard line with 20 seconds left, the Browns had the ability to run one more play in order to get closer for their new, struggling kicker. But instead, they decided to take a knee for a one-yard loss, leaving Parkey with a 46-yard attempt to win the game at the buzzer.

Parkey missed it left, but it might have been good from 10 yards closer.

So why the hell didn’t the Browns run a safe play to gain five to 10 yards before using their last timeout? They were playing scared, that’s why. And in the NFL, that usually backfires.

Field goal attempts from 46 yards were only a 72 percent proposition last season. But if you get 10 yards closer, that rate shoots up from 72 percent to 91 percent. So why in the world wouldn’t you at least attempt a safe, short-to-intermediate pass in order to give Parkey a better chance?

Because you’re the Browns, that’s why.

Did the Tampa Bay Buccaneers really take a kicker in the second round of the 2016 NFL draft?

Like, that really happened? It wasn’t a sleep paralysis hallucination? And some of us are surprised that the Bucs, who actually traded up in order to take Roberto Aguayo out of Florida State, are now suffering the consequences associated with such a silly risk?

Aguayo, who had the yips for much of the preseason and training camp, has now missed kicks from inside 45 yards in back-to-back weeks, giving him a 33 percent success rate on his three attempts this season. He also missed an extra point on Sunday against the Los Angeles Rams — a game which the Bucs lost by a single score.

That just can’t happen, especially when you’re the highest-drafted kicker in a decade.

The problem is that a Bucs team with holes to fill elsewhere had no business using such a high draft pick on a kicker, and now the kicker himself is doing much more harm than good.

Other Stupid Things from Week 3

**I’m not done with the Bucs, who may have been under the impression the fourth quarter is 16 minutes long.

Tampa Bay still had a decent chance to beat the Rams Sunday. They had the ball at the Los Angeles 40-yard line with 1:36 to play, down five but with two timeouts to work with. After completing a pass to the 34-yard line, they allowed 16 seconds to come off the clock before taking the next snap. Then they completed another short pass in the middle of the field, before allowing another 16 seconds to elapse.

A couple plays later, Jameis Winston hit Charles Sims for 12 yards, but Sims inexplicably failed to get out of bounds despite having a clear opportunity to do so. The Bucs, for some reason, didn’t use a timeout. There go 16 more seconds. They’d get the ball down to the L.A. 15-yard line, but ultimately they ran out of time… despite the fact they still had a timeout left.

It was one of the worst displays of clock management I’ve seen in a league that has been plagued by failures in said department.

Was that real life?

**Dudes continue to return kicks that are, like, seven yards deep into the end zone.

This despite the fact that new touchback rules mean taking a knee gives the return team the ball at the 25-yard line, and the fact that an average return is 24 yards. Almost every kick that goes into the end zone should be a touchback, and yet guys like Andre Roberts continue to do stuff like this…

So far this season, 78 percent of returns on kicks into the end zone have failed to make it past the 25-yard line, with the average return making it only to the 22. Yet plenty of return men continue to try to be heroes.

**Rex Ryan’s decision to kick a field goal from the one-yard line against Arizona.

Statistically, you have a better than 50 percent chance of scoring a touchdown on fourth down at the one. So it’s worth gambling for seven points instead of settling for a much better shot at three, especially because the worst-case scenario gives the opposing team the ball so deep that there’s a good chance you’ll get the ball back quickly with great field position.

But I wouldn’t expect Ryan to know or think of that.

That might have cost Tennessee the game. C’mon, man, it’s a violent sport…