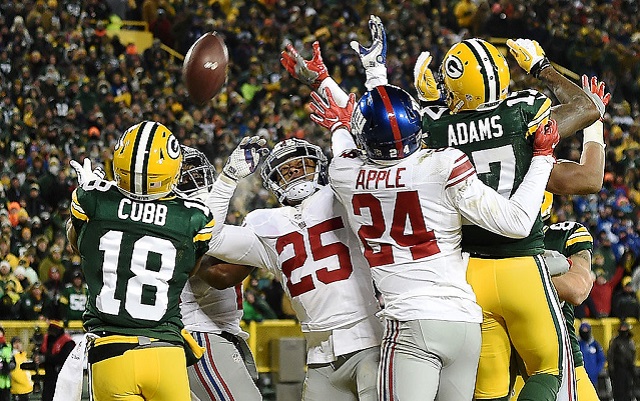 NFL Wild Card weekend provided plenty of material to choose from for This Weekend in NFL Stupid.

With a column like this, you’d think we’d have less to work with during the playoffs. There are fewer games, and the teams playing in said games are presumably kind of smart. But not this past weekend. In fact, we could have written the entireThis Weekend in NFL Stupid column based on one team’s stupidity. That’s where we’ll start…

The defense’s complete lack of understanding regarding how to defend a Hail Mary: Put your hands in the air, guys! Consider jumping! And I know you’re a rookie, Eli Apple, but is this your first year playing football altogether? You don’t let a guy get behind you there.

The defense not letting Jared Cook catch a pass that would have ended the first half: I know it doesn’t feel right allowing an opposing player to make a play that on the surface seems successful, but the Packers made a huge mistake by throwing to Cook in the middle of the field on the penultimate play of the first half.

When Giants defenders saw that throw, they should have backed off and positioned themselves to make an easy tackle. With Green Bay out of timeouts, the clock would have run out a few seconds later, and the Packers never would have had the chance to attempt that Hail Mary.

I know that seems a little complex, but these players and their coaches are paid a lot of money to be aware of these types of things in big moments. You have to account for everything.

Bobby Rainey forgetting how kick returns work: I’ve been watching football a long time, and before Sunday I’d never before seen a returner casually field a kick and voluntarily step out of bounds inside his own five-yard line.

That brain fart led to a buried three-and-out and then a Green Bay touchdown. The Giants never recovered.

Paul Perkins becoming the first player in NFL history not to dive on a potential fumble: Paul, dudes have been knocking over their own mothers to jump on dead balls stemming from clear incomplete passes, well after the whistle, for decades. And on a very questionable play, with no whistle to be heard, you decide to become the first-ever player to be nonchalant about a potential live ball? Come on, man!

Clay Matthews knocks Paul Perkins out of the way to pick up the fumble. Great awareness. pic.twitter.com/VfZhtjMUKz

That was the knockout punch.

Ben McAdoo deciding to punt twice inside the Green Bay 45-yard line: It’s really simple, Ben. You don’t forfeit a chance at points in order to buy yourself an extra 20-30 yards on defense. It’s illogical. One day, when coaches are no longer stuck in the football dark ages, they’ll stop punting on 4th-and-5 from the 35 and 4th-and-6 from the 41, as McAdoo did Sunday.

The Miami trip: I don’t care what NFL players do on days off. I really don’t, and I don’t believe Odell Beckham Jr. and his fellow receivers struggled on Sunday because they were partying in Miami instead of at home studying or working out for 24 consecutive hours last Sunday and Monday. That said, the optics were bad, and the trip wasn’t necessary. Could have waited a couple weeks and nobody would have cared.

But Beckham and his teammates failed to realize that an off-day trip to Miami in the week between the end of the regular season and the start of the Giants’ first playoff appearance in five years was a bad idea. That was stupid of them.

Other stupid things from wild-card weekend

Pittsburgh led by 18 points with less than five minutes to play in a game the Dolphins had for all intents and purposes conceded. And yet there was Roethlisberger, along with several injury-prone teammates, on the field, throwing passes.

Sure enough, because football gods exist, this happened…

#Steelers QB Ben Roethlisberger didn't leave the win over #Dolphins unscathed. He left Heinz Field with a boot on his right leg. pic.twitter.com/bYmrUSbCi8

The Raiders leaving Connor Cook in a relatively close game

You kidding me, Jack Del Rio? Or were you lying about how healthy Matt McGloin was? Because when Cook went 4-for-14 for 41 yards with an interception in the first half, it had already become plainly obvious to everyone watching that the rookie wasn’t ready to take NFL snaps. And yet McGloin continued to watch helplessly throughout the second half as Houston pulled away. Unless they secretly amputated the guy’s injured shoulder, that’s inexcusable.

In Seattle, this was deemed uncatchable…

in what universe is this uncatchable? i’m just seeking understanding https://t.co/61zPDG0uVZ

Uh, yeah. Because of the blatant pass interference. Chicken or the egg? Poor Lions.

You're not likely to convert a 4th-and-12, but you're less likely to score 3 touchdowns and two-point conversions in the final 10 minutes.