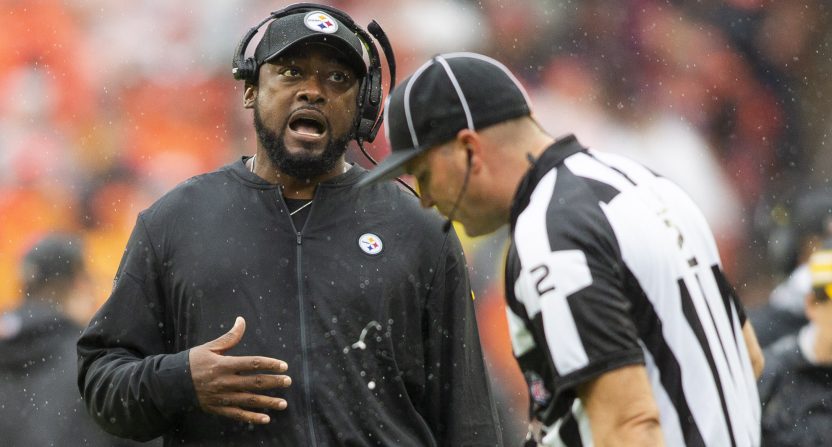 This Weekend in NFL Stupid is back to highlight the dumbest moments and decisions in football throughout the 2018 season. We kick off the year with several mind-blowing game-management decisions from two of the biggest games from Sunday.

When will coaches learn to stop playing for field goals that aren’t chip shots?

Despite poor weather conditions in a game that was officially sponsored by Murphy’s Law, Pittsburgh seemed satisfied as soon as they reached the Cleveland 31-yard line late in OT, handing the ball off twice in a row before running a safe screen pass and settling for a still-tricky 42-yard field goal attempt.

The kick was wide left, but would have been good from 35.

Despite the same conditions in the same game, Cleveland seemed satisfied with the ball at the 24-yard line following a Pittsburgh turnover in the final minute of OT, handing the ball off once and then spiking it before settling for a still-tricky 43-yard attempt.

The kick was blocked, although it might not have been from 35.

Both teams deserved to lose, and they pretty much did with that tie.

I know it must have been an intimidating moment for the Bears’ first-year head coach and his young quarterback. A Hall of Fame quarterback was lighting them up on one leg at historic Lambeau Field, and they’d blown a massive lead as road underdogs. But Chicago still could have easily survived Sunday night.

Instead, Nagy and Trubisky panicked and shot themselves in the foot on offense.

Their first mistake came when they had a 3rd-and-1 on the Green Bay 14-yard line while holding a three-point lead with less than three minutes to play, and they inexplicably had Trubisky throw a pass before settling for a field goal. The pass was incomplete, stopping the clock and saving the Packers 40 seconds (they were out of timeouts), but the better strategy would have been to charge ahead with two consecutive running plays in order to ice the game. What are the odds you won’t get a single yard on back-to-back runs? Backs Jordan Howard and Tarik Cohen were both having great games, and you can’t afford to give Aaron Rodgers the ball back with more than two minutes remaining in a one-score game.

They were too conservative there, but their second mistake came when they became too aggressive following the inevitable Packers touchdown that came after their original gaffe.

Now trailing for the first time all night, there was no reason for Nagy to put everything on Trubisky. It was still just a one-point game when the Chicago offense took the field in possession of two timeouts with just over two minutes still remaining. Trubisky dropped back to pass 10 times on that drive, while Howard and Cohen received zero handoffs. Two of those plays were nullified by penalties, including one bail-out unnecessary roughness call on Clay Matthews, but Trubisky still attempted three deep passes (all incomplete). The Bears had no reason to rush and get away from their modus operandi. Had they just relaxed and operated regularly, they could have easily driven into field-goal range with plenty of time remaining.

If Chicago plays it right in either of those situations, Rodgers and the Packers don’t likely complete that historic comeback.

Roughing the passer call on Myles Garrett. Landed on Roethlisberger with his body weight. A fourth down stop turned into a touchdown the very next play. pic.twitter.com/fHGgRYTWSP

This just can’t happen with a game on the line, especially from a 10-year veteran…

Here's the late hit by Clay Matthews on the previous 4th downpic.twitter.com/iypHicFxCL

Nathan Peterman remains employed by an NFL team. Colin Kaepernick does not.

NFL's lowest-rated passers in the last 30 years, among 338 quarterbacks with a minimum of 50 career attempts: