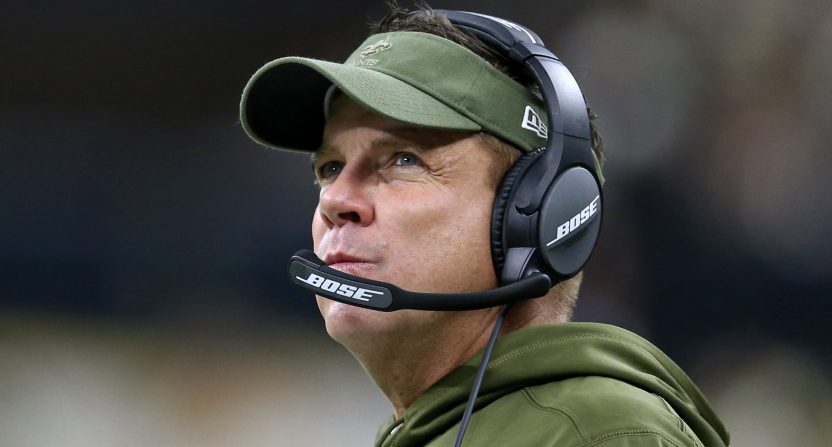 This Weekend in NFL Stupid highlights the dumbest moments and decisions in football throughout the season. Coming out of Week 13, we’re focusing on Sean Payton’s many miscues on Thursday night.

It started with that challenge. Early second quarter of what’s shaping up to be a close game. Payton knows that NFL officiating is as bad as ever and that challenges are critically important. And yet even though he’s got just one challenge remaining following a failed one in the first quarter, he throws the red flag in order to buy his offense 15 yards inside the Dallas 25-yard line.

What’s truly amazing is Payton challenged that his tight end, Dan Arnold, caught and fumbled a pass that was ruled an incompletion. ON FIRST FREAKIN’ DOWN. Payton was right. Arnold did catch and fumble it (the Saints clearly recovered for what resulted in a 15-yard gain). But the alternative to 1st-and-goal on the Dallas 7-yard line was 2nd-and-10 on the Dallas 22-yard line. There’s still a good chance you’re not going to score anyway after winning the challenge, and there’s still a good chance you’re going to score anyway after not challenging. Doing so is simply not even close to worth losing the ability to challenge for the next 42 minutes.

But that’s what Payton did, and sure enough, it was all for naught when his offense turned it over on downs anyway.

Dallas scored on the ensuing drive and that might have been the difference in the game.

There were also a couple of plays later on that Payton could have challenged had he not used his up so early.

But we’re not done with Sean. It was he who used a timeout just seconds before the two-minute warning while trying to get a stop and save clock time on defense late in a one-possession game. By using that timeout before the two-minute warning, you save yourself only a couple of seconds while completely opening up your opponent’s playbook. At that point, the pass was fully on the table for Dallas because it knew the clock was automatically going to stop following the upcoming play. Sure enough, they threw the ball and drew a game-icing pass interference penalty.

And one more. Nice thinking punting on a 4th-and-9 at the Dallas 42-yard line midway through the fourth quarter. The ensuing touchback merely bought your defense 22 yards. The Cowboys milked the shit out of the clock on the drive that you handed them. Do you not realize you’ve got one of the most lethal offenses in football?

OK I lied. WAIT, you also punted on a 4th-and-3 at midfield while down two scores late in the third quarter? You’re just lucky Dallas bailed you out there with a running-into-the-kicker penalty which led to your only touchdown of the game. What a joke.

While this certainly can’t go uncalled…

Two weeks in a row the #Cowboys getting away with helmet to helmet BS. Do better, NFL. Jordan Reed last week. Kamara this week. pic.twitter.com/gLUeOOAvwy

Elsewhere, this was actually a terrible decision by Todd Gurley because the Rams weren’t yet in position to kneel down…

Todd Gurley with another unselfish play to kill the clock and preserve the win. pic.twitter.com/4w2DEecqMS

I cannot imagine going into Foxboro and trying to beat Tom Brady and only call 13 runs. Averaged 7.3 per run but only called 13. They will blame the defense for not playing well, but letting TB have the 33 minutes is a recipe to lose. Vikings just run plays. Battleship Football

This could have been costly…

Not sure why Ekeler ran out of bounds there. Rookie mistake.

This has been happening a lot…

How on Earth did the refs miss this false start on that TD pass? Plain as day. Not sure the announcers mentioned it either. pic.twitter.com/ApD9jbJrvj

Early in the Sunday nighter, the Chargers had a 4th-and-1 on the Pittsburgh 34-yard line. They settled for a 52-yard field goal.

That, my friends, is idiotic. Not only are you THE CHARGERS, who are allergic to placekicking, and not only are you IN PITTSBURGH, where placekickers go to die, but even under regular circumstances a 4th-and-1 is about a 40 percent proposition while a 52-yard field goal is about a 55 percent proposition. Are those extra 15 percentage points worth sacrificing the chance to extend the drive and score a touchdown? No way, especially considering that you’re jinxed on field-goal attempts and kicking in tougher-than-usual environment, and that you have an MVP-candidate quarterback and a highly-ranked offense.

You’re better than that, Anthony Lynn. You deserved your zero points on that drive.