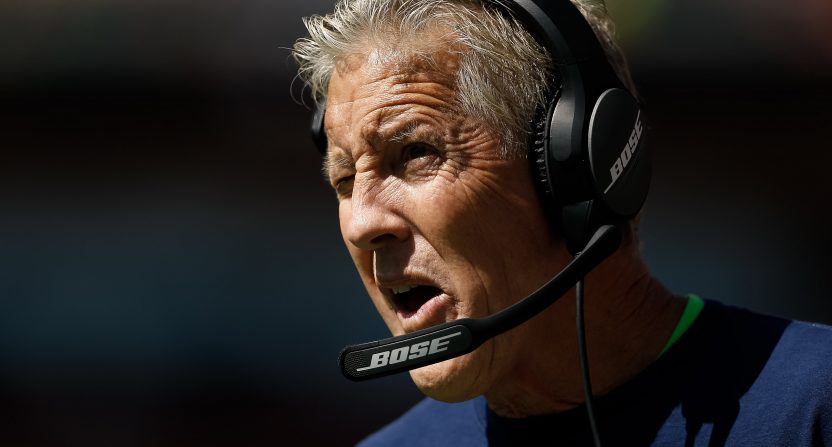 This Weekend in NFL Stupid highlights the dumbest moments and decisions in football throughout the season. Coming out of Week 2, we’re focusing on some baffling decisions to kick off.

Down by five with 2:08 remaining in the fourth quarter, the Steelers kicked off into the Kansas City end zone

This despite the fact the Chiefs had scored 42 freakin’ points. The touchback gave Kansas City the ball at the 25-yard line. A failed onside kick attempt gives an opponent the ball at around midfield. Is it really worth sacrificing the outside chance of recovering an onside kick in order to gain 25 yards for your defense?

I think coaches all too often approach these decisions with the mindset that the game is over if the onside kick fails, but it’s essentially the same result as a deep kick, except the yardage difference. In either case you have to pitch a three-and-out on defense in a situation like that, so why not at least give the onside kick a shot?

In this case, Ben Roethlisberger and the Steelers offense never got the ball back in their hands.

Down by seven with 10:13 remaining in the fourth quarter, the Seahawks (sort of) kicked off to Chicago

On the surface this sounds like a perfectly sane decision, but it’s important to consider that Seattle was kicking off from midfield following a Chicago penalty on the touchdown. And they decided to do something unorthodox anyway. Head coach Pete Carroll had Aussie punter Michael Dickson perform a drop-kick kickoff to the one-yard line, which worked like a charm, buried the Bears inside the 20 and created a viral moment.

But if you’re going to do something “zany” there, why not just attempt the surprise or non-surprise onside kick? In fact, coaches should do this pretty much every time they have a chance to kick off from midfield, because even if you fail, your opponent will likely be starting out around the 30- or 35-yard line.

It’s no risk and plenty of potential reward, but it hardly ever happens because NFL coaches aren’t very smart.

Down two scores in the third quarter against Cincinnati, the Ravens threw short of the sticks on back-to-back plays — a 3rd-and-2 and a 4th-and-2. That’s right, Joe Flacco twice failed to throw the ball beyond two yards of the line of scrimmage when that’s all he needed for a first down with the game essentially on the line.

Joe Flacco is the GOAT at throwing short of the sticks on 4th-and-2.

With a rookie kicker who had already missed two field goals, the Vikings could have gotten closer than the 17-yard line late in overtime against the Packers. Instead, they ran the clock down and left timeouts in their back pocket, and this happened…

The Vikings traded up to draft this Daniel Carlson guy 🤦🏽‍♂️ pic.twitter.com/JQxXgqczjW

Down 7-0 early on the road, Giants head coach Pat Shurmur punted on 4th-and-inches at midfield. That bought his team only 35 yards, and the Cowboys scored on the ensuing drive. Oh, and it got weirder in the second quarter, when he panicked and went for it twice in a row in tougher spots.

If this is technically a penalty, I seriously believe the NFL might as well just make all hits on quarterbacks illegal…