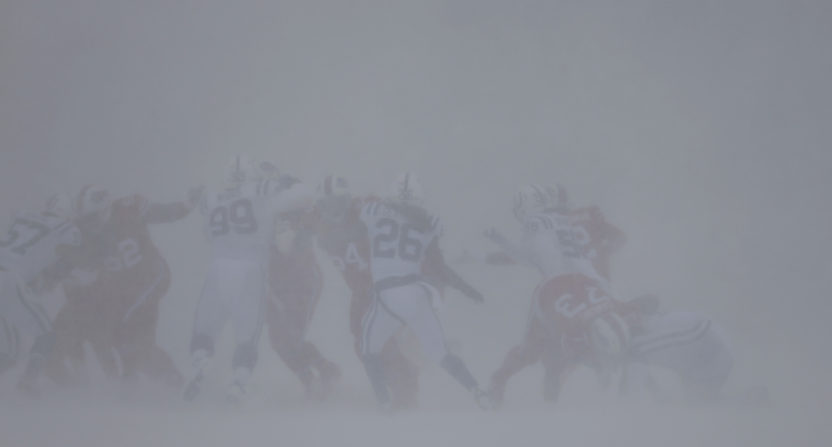 This Weekend in NFL Stupid highlights the dumbest moments and decisions in football throughout the season. And in Week 14, we start with all of the stupid things that happened in the snow at New Era Field in Orchard Park.

Tied at seven late in the wildest snow game the league has seen in years, the Colts intercepted the Bills in order to set up a first down at the Buffalo 28-yard line with 52 seconds remaining. But despite the fact the conditions forced Adam Vinatieri to perform a magic act in order to make an extra point a few minutes earlier, the Colts hardly attempted to get closer for Vinatieri.

Indianapolis ran the ball once for three yards and let the clock run all the way down to seven seconds before spiking it to give Vinatieri a 43-yard attempt. He missed, and Indianapolis lost in overtime.

Coaches do this far too often, essentially settling for lower-percentage attempts as soon as they reach “field-goal range.” It’s not smart, especially in a snowstorm.

Meanwhile, Indy ran the ball 46 times to just 22 passes. I know, there was a bunch of snow on the ground (!!!). But as my Bleacher Report teammate Mike Tanier points out, it’s a misconception that you have to stick to the ground game just because it’s snowing:

“You can throw downfield in the heavy snow, Coach. The defender is more likely to slip than the receiver (who knows when and where the ball will arrive), as the Bills demonstrated in the plays before halftime and in the overtime that decided the game.”

Quarterback Jacoby Brissett threw only three passes that traveled 15-plus yards, which is a little bit ridiculous.

This is not pass interference

But there’s a good chance none of that would have mattered had Indy’s late two-point conversion attempt not been negated by an offensive pass interference penalty that should have never been called because receiver Kamar Aiken (number 17) was still within a yard of the line of scrimmage when this pick play occurred.

Let them play the damn game.

Eli Manning started at quarterback for the New York Giants

It’s painfully obvious that the organization did this only in order to save face because fans, former players and members of the media were inexplicably crying that Manning had been screwed because he apparently didn’t “deserve” to be replaced, even though Manning has actually been a terrible quarterback for much of the last few seasons and the Giants would actually be best-served getting a look at younger signal-callers Geno Smith and/or Davis Webb.

That was worth the run-on sentence.

All deserved to be listed together. It’s almost as if they didn’t want to wi–ohhhhh.

Phantom leverage penalty might have cost the Rams dearly

Rams get called for a leverage penalty to give the Eagles a 1st down pic.twitter.com/b9GfXpRfYb

There was some debate whether the flag was on Samson Ebukam or Aaron Donald, but nobody on the Los Angeles side committed an infraction on that play.

“Nothing I see that merits a call at all,” said Fox analyst and former officiating czar Mike Pereira, per Yahoo Sports.

That gave the Eagles a fresh set out of downs, costing the Rams over two minutes of game time in a game they trailed by two points.

What the hell were the Ravens thinking?

Trying to preserve a fading lead that had shrunk to just two points, the Ravens took the field at their own 25-yard line with 3:29 remaining in the fourth quarter. The goal should have been to run the clock or force the Steelers to use some or all of their three timeouts. Working in their favor was the fact running back Alex Collins was averaging 6.6 yards per carry.

But the Ravens threw on first down and third down, handing off just once to Collins. Pittsburgh didn’t use a single timeout, because garbage quarterback Joe Flacco missed on both of his throws. The Ravens punted the ball away with 2:34 on the clock, having only taken 55 seconds away from their opponent.

Tom Savage returned to the game after this happened…

Tom Savage hits head on ground, appears to have seizure while ref looks on, comes back in the game 5 minutes later. pic.twitter.com/gW9lYxDIwQ

This speaks for itself. The league’s concussion protocol is a sham.