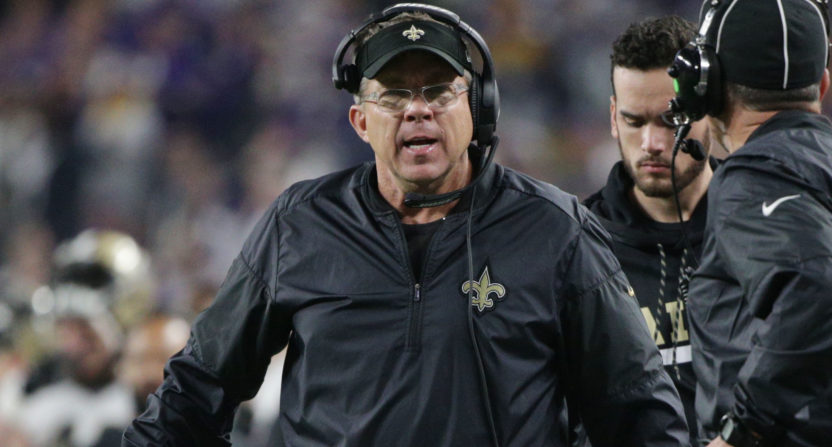 Two weeks into the 2018 NFL playoffs, the league is giving us a ton of material for This Weekend in NFL Stupid. And I suppose the only appropriate place to start this week is with the weekend’s final play from scrimmage — one that few of us will ever forget.

??? How? Here is the TD, Stefon Diggs scores one of the most improbable TD's you will ever see & sends the Vikings to the NFC Championship (via @nfl)#Skol#Vikings#NOvsMIN pic.twitter.com/a2TPn1avR4

Three thoughts regarding the stupidity of the Saints:

1. The play never should have happened. On what should have been the game-winning drive, New Orleans settled for a 43-yard Wil Lutz field goal with 25 seconds remaining. They had a 3rd-and-1 at the Minnesota 24-yard line and didn’t really try hard to pick up the first down. Instead, it appeared the plan was for running back Alvin Kamara to center the ball for the attempt. By doing that, the Saints gave the Vikings one last shot instead of kicking the field goal as time expired.

2. The Saints defended the play stupidly. It was a 3rd-and-10 from the Minnesota 39-yard line and the Vikes needed to get to about the New Orleans 40-yard line to have a shot. With the Vikings out of timeouts, New Orleans should have treated its own 40 like the goal line on a Hail Mary attempt. Give them whatever the hell they want inside of that. Instead, they still rushed four and had dudes drifting in the middle of the field. When the pass was thrown, Williams was the only Saints defender inside of the New Orleans 40-yard line.

3. Marcus Williams balked on what likely would have been a game-winning tackle or pass breakup. It was just poorly played, and a stupid decision considering how loose the officials were calling the game at that point. He might have arrived too early, but even a pass interference penalty would have only given the Vikings a 53-yard field-goal attempt.

That beats losing because the high safety decides to bail entirely on the play. Maybe he didn’t know there was no other help. Maybe he just couldn’t pull up in order to let Diggs catch the ball and wrap him up. Regardless, he made a bad call.

One more thing after watching the play for the 467th time: Ken Crawley would have had a good chance to tackle Stefon Diggs. Unfortunately, as Diggs was making the catch Crawley was tripped by his own teammate, Marcus Williams.

Coaches brag about their 18-hour days. Maybe they should work a little less and get some more sleep so they stop doing such moronic things during games.

Look at these fools on the New Orleans sideline at the conclusion of the play that led to Payton’s first bad challenge. I hope none of these guys lobbied Payton to throw the challenge flag on what was a clear-cut catch for Vikings receiver Jarius Wright.

With the game on the line, Drew Brees threw three consecutive low-percentage passes in the direction of Xavier Rhodes. Rhodes might be the best cornerback in football. New Orleans still kicked the go-ahead field goal after a fourth-down conversion, but they might have shaved more time off the clock had they mixed it up a little on that set of downs.

On a crucial third-and-short in the fourth quarter, the Saints had Willie Snead throw a deep pass on a trick play. Willie Snead is not a nickname for Drew Brees, and he is not a quarterback. Why are you paying $24 million to a future Hall of Fame passer if you are going to have wide receivers throw passes in huge spots? The play itself was well-designed, but Snead’s throw missed a wide-open Alvin Kamara.

Marshon Lattimore got away with pass interference on a huge third down in the fourth quarter. If this gets called, the Vikings probably don’t need a Hail Mary.

But this should not have been pass interference. And it led to Minnesota’s first touchdown.

Stupid things not involving the Vikings or Saints

The Steelers basically abandoned Le’Veon Bell. You’ve got arguably the league’s best running back, up against a defense that struggles against the run and has your quarterback’s number, and you give him just 16 carries? That can’t happen, especially since Bell was productive when given opportunities. Offensive coordinator Todd Haley panicked when the Steelers fell behind in the first quarter.

Who does this on 4th-and-1 in crunch time? Like, you’ve got Bell and your quarterback is nine feet tall and 450 pounds…

Jalen Ramsey was penalized for unsportsmanlike conduct after being pushed into Le’Veon Bell. Bad!

Jalen Ramsey has a right to be mad about that penalty ?#Jaguars | #HereWeGo pic.twitter.com/dkzGJj88IF

Steve Sarkisian called a terrible game for the Falcons offense, especially inside the red zone down by five in the final moments. Whether having Matt Ryan throw a low-percentage fade to Julio Jones on 1st-and-goal, or throwing short of the end zone to Jones on 3rd-and-goal, or whether it was having Ryan roll out with no space to find Jones on 4th-and-goal, or whatever the hell this was on 2nd-and-goal…

As bad as that fourth down was, this play ultimately defines the Steve Sarkisian Experience. pic.twitter.com/e4yqxMbght

What is Rodney McLeod supposed to do? pic.twitter.com/G6N8feQGTE

The Falcons were penalized for delay of game on a 4th-and-2. Although it actually worked to their advantage because the negated attempt failed. Still, come on!

Finally, it took the replay folks more than four minutes to determine that this punt hit an Eagles player before being recovered by the Falcons. Get it together, Al Riveron.