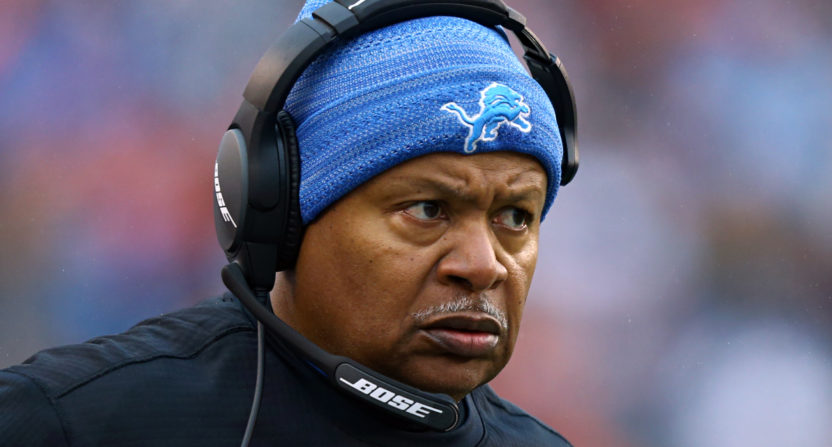 This Weekend in NFL Stupid highlights the dumbest moments and decisions in football throughout the season. And in Week 16, we start with good ol’ Jimmy Caldwell.

With the Lions’ season on the line, Jim Caldwell dropped the ball

Down two with four minutes remaining in a do-or-die road game, Caldwell inexplicably decided against challenging that this was an incomplete pass…

If overturned, that would have given the Lions a first down near midfield. Instead, they had to punt on 4th-and-long and their season essentially ended four minutes later. There was a chance the call on the field was going to stand, but an argument could be made that Golden Tate had possession before the ball was jarred loose.

It was at least worth a shot, so it was very strange that Caldwell didn’t at least throw the flag. And by strange, I mean dumb.

This goes without saying at this point, but…

This is either a catch or it is not, but there’s no clear evidence either way.

Apologies. Here's the #Bills' Kelvin Benjamin "no catch." Was ruled TD on field and overturned on replay because NFL. pic.twitter.com/8WPQ9ps0bZ

The call on the field should have stood. Al Riveron’s tenure as executive vice president of officiating should end following this season. This just isn’t working.

Down seven points early in the fourth quarter in Foxboro, the Bills attempted a 50-yard field goal on 4th-and-1

Look, in some situations it’s OK to settle for a field goal while trailing by a touchdown, even in the fourth quarter. But against the Patriots on the road? When you only need a yard for a fresh set of downs? When the kick is a 50-yarder? That’s absolutely batshit crazy.

Naturally, the attempt was no good.

Why the Jaguars are too undisciplined, part 739

Down 37-33 with 1:43 remaining, the Jags still had a chance to get the ball back from the 49ers. And then Malik Jackson did this…

The headbutt by #Jaguars Malik Jackson at the end of the game which gave the #49ers a new set of downs in a must-stop situationpic.twitter.com/jCc13xuhiX

Fresh set of downs for San Francisco. Game over.

Why the hell is Eli Manning still playing?

Like, seriously, why? Even down 23 points in the fourth quarter of a Week 16 road game? For a team that has two wins all season? How transparent is it that the Giants have allowed their image to trump logic?

Peter King of The MMQB sums it up perfectly:

I have stressed this over and over when discussing the Giants in recent weeks. Ben McAdoo was absolutely right in saying he wanted to play different quarterbacks for the last five games, because there was nothing to be gained for the future of the franchise by continuing to run out Eli Manning for the final five meaningless games. McAdoo, in fact, was the adult in the room in aiming to get Davis Webb two or three late-season starts. But the public and media outcry was so shrill that the franchise wilted under the public pressure, and now the organization will enter the offseason having no idea if Webb, the third-round rookie, can walk and chew gum at the same time. A pathetic display by the Giants. You know what they say about coaches and GMs and people in football who listen to the fans too much? If you listen to the fans too much, soon you’ll be sitting with them.