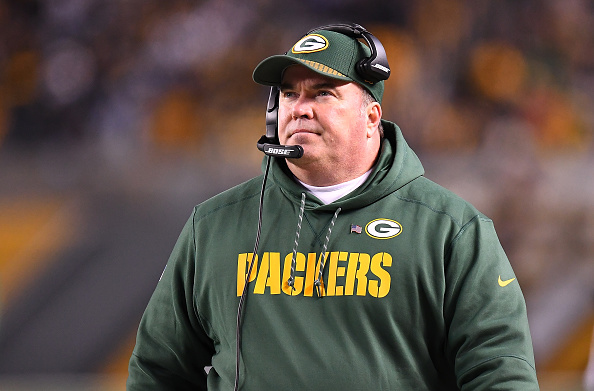 This Weekend in NFL Stupid highlights the dumbest moments and decisions in football throughout the season. And in Week 12, a lot of really stupid decisions were made and equally stupid penalties were called/not called, so we’re going rapid fire here.

For having kicker Mason Crosby attempt a 57-yard field goal with 19 minutes remaining in a game the underdog Packers led by a touchdown. Why do that? Crosby has only made a couple field goals from that distance in his 11-year career, and nobody has ever made a field goal beyond 53 yards at Heinz Field. The miss gave the Steelers the ball near midfield, and six plays later the game was tied.

For having kicker Wil Lutz attempt a 21-yard field goal on fourth down at the Rams’ three-yard line in the fourth quarter of a game the Saints were trailing by 13 points. With a high-powered offense, you absolutely have to keep Drew Brees and Co. on the field when you’re that close to the end zone and a touchdown will make it a one-score game and a field goal will not.

You’re going to be down two scores after that play regardless of the result of the field-goal attempt, but a failed fourth-down gamble at least buries the Rams deep in their own territory. It was an insanely conservative decision that late, and it hurt the Saints’ chances of winning a huge game.

For admittedly getting “greedy” by having crappy quarterback Blake Bortles drop back to throw a pass on his own 12-yard line with 37 seconds left in a tie game. That stopped the clock, and even a third-down run wasn’t enough to prevent the Cardinals from getting one last possession. Indeed, Arizona got the ball back with 16 seconds left and won the game a few plays later on a 57-yard Phil Dawson field goal.

The officials in Kansas City

For flagging Bills cornerback E.J. Gaines for unnecessary roughness on a play in which he whiffed on a tackle, at a crucial moment no less. They’re lucky that garbage call didn’t cost Buffalo the game.

Check out this terrible personal foul the officials called on EJ Gaines during the Buffalo vs Chiefs game https://t.co/R6fLkFRdu8

And the officials in Cincinnati

For flagging Bengals safety Jabrill Peppers for unnecessary roughness on a play in which he laid down a solid hit, giving the Bengals an extra 15 yards en route to a touchdown that put the Browns away.

Here is another angle of the hit by Jabrill Peppers that was flagged for a personal foul. #GoBlue #Michgan pic.twitter.com/O66RFTaN0v

The officials in Detroit, along with Lions head coach Jim Caldwell

The officials for allowing the play clock to expire a fraction of a second before the two-minute warning without penalizing the Vikings, who were trying to milk the clock while protecting a one-score lead. Caldwell for not noticing that and calling them out. That cost the Lions 40 crucial seconds.

Finally, anyone who cheered when C.J. Beathard was injured

I don’t care how much you want to see Jimmy Garoppolo, and I don’t care that these guys are highly-paid professionals. It’s one thing to boo them for poor performances, but it’s another thing to applaud an injury. They’re human beings with families and lives outside of football.

I know it’s easy to forget that in an age of fantasy football, with the gap between celebrity athlete and Joe Six Pack larger than ever, but let’s just not be assholes. Is that too much to ask?

Reuben Foster on crowd's reaction late in the game… pic.twitter.com/VfjVMsVipD