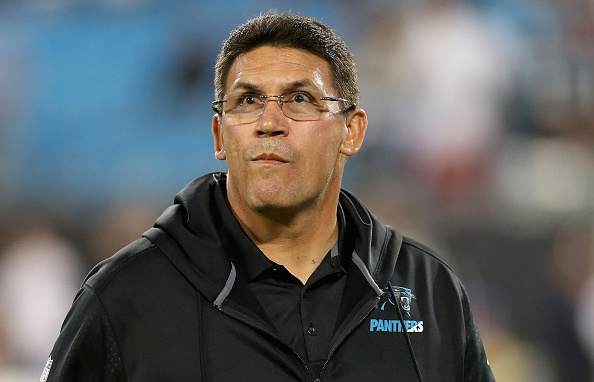 This Weekend in NFL Stupid highlights the dumbest moments and decisions in football throughout the season. For Week 6, we start with an embarrassing Thursday night for Ron Rivera and the Carolina Panthers.

The week got off to a stupid start on Thursday when Rivera’s Panthers completely bungled crunch time against the Philadelphia Eagles. The Panthers got the ball trailing by five points with just under six minutes remaining in the fourth quarter. No reason to panic, although it would have been nice if they had a full complement of timeouts.

Rivera had already used a timeout on a bad, unnecessary challenge earlier in the quarter. Quarterback Cam Newton might have crossed the goal line on a dive toward the corner of the end zone on a scramble, but there clearly wasn’t enough evidence to overturn the call on the field and losing the challenge gave the Panthers 1st-and-goal on the 1-yard line anyway (they scored easily on the very next play).

Anyhow, with 3:33 to play the Panthers had moved the ball into Philly territory and were facing a 4th-and-2. Kudos to Riverboat Ron for electing to go for it, but the fact they used yet another timeout with the clock stopped prior to that gamble is enough to make me throw up in my mouth a little bit. They’d convert, but with just one timeout remaining Newton got panicky and started throwing unnecessary bombs. He was nearly intercepted on first down, he launched a wild pass to the end zone on second down and he was intercepted on third down.

When they got the ball back a minute later, they were in desperation mode and were barely able to breach Eagles territory. Had Rivera been smarter with his timeouts and had the offense been properly prepared for that fourth-down play, the Panthers might have won instead of lost.

On a safe 3rd-and-long run with less than 30 seconds remaining in a tie game, Chicago Bears running back Jordan Howard ran out of bounds

The Bears would have been able to run out the clock. Instead, they were forced to punt to the Baltimore Ravens, who had returned a punt for a touchdown earlier in the quarter. They’re damn lucky Michael Campanaro didn’t break another one.

Why is this a flag?

Le’Veon Bell got a flag for this TD celebration.

The NFL is coming around on celebration penalties, but it still has a long way to go.

Leading the Atlanta Falcons by three with 47 seconds remaining in the fourth quarter, the Miami Dolphins took a timeout on defense

I still can’t wrap my head around this one. The Falcons had just picked up a first down at the 26. They were the desperate team, trying to pick up extra yardage for a game-tying field goal attempt. Sure, they might have taken a shot or two at the end zone, but do you really lack confidence in your defense so tremendously that you were already calling timeouts, assuming they’d gain another 26 yards and score in the last 47 seconds?

It was a weird-ass decision that luckily didn’t bite them in the ass because Falcons quarterback Matt Ryan threw a game-sealing interception on the very next play.

Falcons get a first down in field goal range, the Dolphins inexplicably call timeout, and then they pick Matt Ryan to win the game.

I sort of get it, Andy. Your offense hadn’t been moving the ball well all day and you were finally close. Trailing the Pittsburgh Steelers by nine points early in the fourth quarter, you had a 4th-and-2 on the Pittsburgh 4-yard line. Knowing you’d probably need at least one touchdown, you gambled. And it backfired.

But the thing is, as painful as it is, you simply have to take the points when you’re down two scores, a field goal will make it a one-score game and it’s fourth down in the fourth quarter. You take the easy three points now and understand that you’ll need a touchdown next time, rather than trying to force the touchdown against a tough defense on a small field. You’re risking too much. In this case, it was costly. Your offense scored a touchdown on the next drive anyway. Had you taken the points at that first juncture, you’d have had the lead.

And this, of course

#Jets just got screwed on this Austin Seferian-Jenkins call…ruled a touchback and the Pats ball. pic.twitter.com/nVLRNsHwjD

You could argue that I’m burying the lead here, but this call and rule are both so bad and the entire episode has received so much attention that it’s become exhausting. You already know this is stupid, so I don’t imagine you came here just to be told for the 2,347th time that…

A) Fumbling the ball into the end zone shouldn’t result in a touchback unless the defense recovers. If you fumble out of bounds before the end zone, the defense doesn’t get the ball. If you fumble into the end zone, the same rule should apply. I suppose you could also add a yardage-based penalty if you want to prevent players from deliberately fumbling the ball forward in desperate moments near the end zone, but I highly doubt that’d ever come into play. Point is, the rule in its current form is unfair and far too punitive.

B) The replays clearly lacked clear evidence that the original call (touchdown Jets) was wrong. The call never should have been overturned.

It was one of the worst calls I’ve ever seen, made worse by the fact it caused the worst rule in the NFL to be applied. That’s rough, and it might have cost the New York Jets a victory over the New England Patriots.