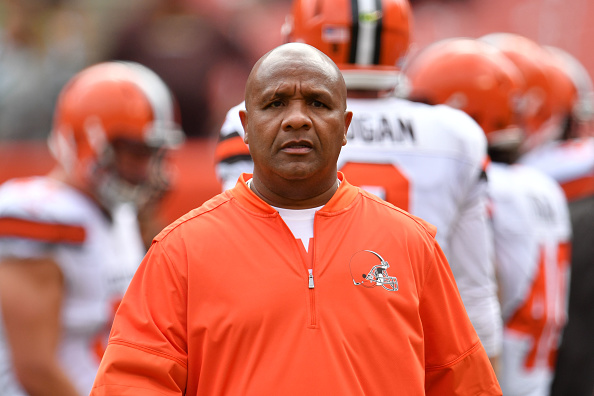 This Weekend in NFL Stupid highlights the dumbest moments and decisions in football throughout the season. And in Week 10, Cleveland Browns head coach Hue Jackson made it easy.

Jackson’s decision to have quarterback DeShone Kizer run a QB sneak at the Detroit Lions’ 2-yard line with 15 seconds remaining in the first half wouldn’t have been crazy at all — if the Browns had at least one timeout remaining. But alas, they did not. And so when Kizer was stuffed, the clock expired.

That cost Jackson’s team three points in a close game, and it landed him a guaranteed mention when we do “This Year in NFL Stupid” in the new year. By then, I get the feeling we’ll be referring to him as “former Browns coach Hue Jackson.”

In a crucial moment Sunday, the Jacksonville Jaguars wide receiver was flagged for taunting AFTER AN INCOMPLETE PASS. He was mocking Los Angeles Chargers defensive back Tre Boston for an illegal hit, which would have already been stupid considering his team trailed by three points in the final two minutes. But what made it legendary was the fact that the officials picked up the flag on Boston.

Marquise Lee with the funniest taunting penalty of the NFL season. pic.twitter.com/ROe8CYcAdV

Instead of getting a free 15 yards, the Jags lost 15. Blake Bortles threw an interception to Boston on the next play, but because the Chargers really suck, the Jags got it back again, tied the game and won in overtime, saving Lee’s ass.

The Chargers are stupid too

Not just bad, and snake-bitten, but stupid. That’s what it takes for a team in the lead to possess the ball twice in the final two minutes and give it away both times. The Chargers went three-and-out after the dumb-ass Lee penalty led to the Bortles interception, which happens. But the Jags only had that opportunity inside Los Angeles territory because the Chargers fumbled while running out the clock inside their own 40-yard line.

Here’s what was particularly stupid: The man who fumbled was a 22-year-old rookie named Austin Ekeler, who had 24 career rushes under his belt. Not veteran back Melvin Gordon, who has fumbled just twice in his last 22 games. Dumb.

The league needs to further loosen up celebration rules

Stefon Diggs flagged for pretending to be a plane and crashing into the goalposts: https://t.co/Iy9siXG3ra pic.twitter.com/zEyyDK6G5u

In many ways, it’s still the No Fun League.

Trailing the defending Super Bowl champions by three scores late in the third quarter, the Denver Broncos punted on a 4th-and-6 from their own 48-yard line

Either you’re completely foolish or you’re throwing in the towel with nearly 20 minutes remaining in a hugely important home game. Either way, your fans deserve better.

The NFL’s concussion protocol is a joke

Mainly because teams aren’t abiding by the spirit of the protocol. Just this week, Russell Wilson was sent off for a concussion examination before spending mere seconds inside the medical tent…

Russell Wilson sent off after taking hit to the chin for concussion check, ducked in the tent then sent right back out pic.twitter.com/8HXvKOGNuG

Jacoby Brissett remained in the game after this happened…

#NFL #concussion protocol is a fraud. QB Jacoby Brissett goes back in after showing the clearest concussions signs of the season. Helmet-to-helmet hit, holds head, then goes limp, then needs help up. You don't need a protocol to hold this player out for the game. Check the tape: pic.twitter.com/db8sDwVmVl

If the Titans let Mariota on the field after that hit, there is no concussion protocol.

At least the league looks as though it’s going to penalize the Seahawks for their blatant violation of protocol.

It seems like all season long, touchdowns have turned into touchbacks when players have fumbled the ball into the end zone. And yes, players should stop fumbling the ball into the end zone, but the reality is the rule is just too punitive. The offensive team shouldn’t automatically lose possession for a fumble that isn’t recovered by the defense. Penalize them yardage if you must, but on Sunday this ridiculous rule nearly cost the Tennessee Titans and did cost the Chicago Bears.

John Fox with the ultimate shot to the foot

That Chicago touchback fumble wasn’t actually ruled that way on the field. The officials determined at first that Bears running back Benny Cunningham was down just short of the goal-line, but Bears head coach John Fox thought he might have gotten into the end zone. He challenged the play, thinking the worst-case scenario was that the play would stand and he’d lose a timeout. Instead, the officials found upon further review that Cunningham fumbled the ball into the end zone for a touchback. Oh, John…

Official: “.. lost the ball and it hit the pylon, resulting in a fumble and a touchback”