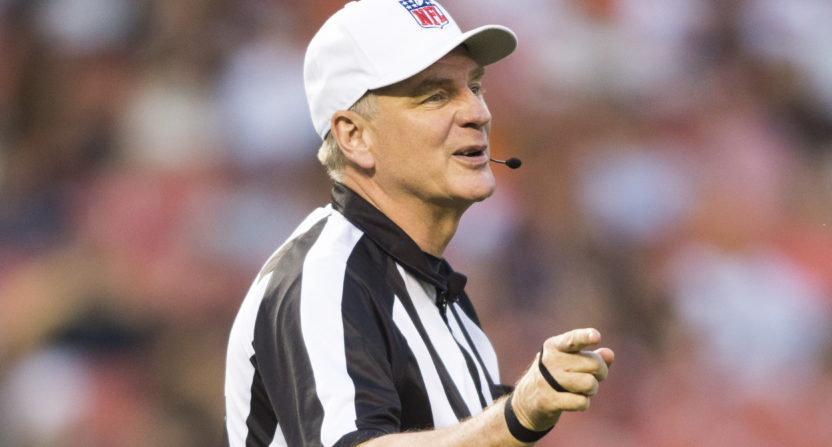 Wild-card weekend 2018 was so plagued by stupidity that This Weekend in NFL Stupid could have been a four-part series, maybe even a book. It was quite literally the dumbest weekend of NFL football I’ve witnessed, which is amazing considering that eight of the league’s top 12 teams were playing on fields along with four of the NFL’s highest-rated officiating crews.

Here’s a rapid-fire breakdown of everything stupid from the weekend that was.

Jeff Triplette did it again. The league’s least competent referee somehow earned the chance to work the Titans-Chiefs wild-card game, and it was a mess. It’s probably for the best that Triplette is reportedly retiring, because he…

Horrible way to start the playoffs. I hate to say it but this was not a good performance by the crew. Teams and fans deserve better.

Andy Reid did it again, Part 1. The biggest playoff choker of a head coach in the game today completely ignored the league’s leading rusher with the Chiefs trying to stave off the Titans in the second half. Kareem Hunt was given just five carries in the final three quarters. “Maybe we could have handed it to him more,” Reid said afterwards. Ya think?

Andy Reid did it again, Part 2. The worst clock manager in the game today completely botched his approach to crunch time. The Chiefs took over at their own 27-yard line, down by a point with 5:58 remaining in the fourth quarter. Over the next three minutes and 49 seconds, Kansas City ran just eight plays, gaining 29 yards before turning it over on downs and never getting the ball back again. You almost have to try to be that incompetent with the game on the line.

It took the replay folks more than three minutes to determine that the Rams touched the ball on a first-quarter muffed punt. It should have taken about three seconds. This is an ongoing issue with the replay process, which continues to drag games down.

In a freakin’ NFL playoff game, players were tripping as a result of the poor field conditions at the L.A. Coliseum. This is a multi-billion-dollar operation, people.

If a quarterback can't even set his feet in the pocket, I'm gonna go ahead and say the quality of the field isn't up to what NFL standards should be.

The NFL should feel good the field conditions in LA for a playoff game. What a mess.

After taking a 12-point lead with 5:54 remaining in the fourth quarter, the Falcons kicked the extra point. Part of me wanted Los Angeles to score two late touchdowns to beat Atlanta, just so that Dan Quinn would pay the price for that comically nonsensical decision. A 13-point lead is useless compared to a 12-point lead!

The Falcons committed defensive holding on the Rams’ final gasp. Had the call been made, Los Angeles still would have had a shot to move within a score in the final couple minutes. Instead, the turnover on downs essentially ended L.A.’s season.

The Rams gave leading offensive player of the year candidate Todd Gurley just 14 carries and 18 touches. Gurley rushed for 101 yards despite a lack of love from his own coaching staff, which panicked after falling behind early in the team’s first playoff game in 139 years.

Jacksonville’s Telvin Smith was flagged for a neutral-zone infraction on a Bills field goal. That gave Buffalo a first down on the Jags’ one-yard line, which could have been a back-breaker in a close, low-scoring game.

Buffalo got cute on the Jacksonville one-yard line. Fortunately for the Jags, Smith’s penalty didn’t cost them points. That’s because the Bills immediately threw a pass on first-and-goal at the one-yard line, despite the fact that Jacksonville has an excellent pass defense and a bad run defense, and the fact Tyrod Taylor is Tyrod Taylor and the Bills are a run-first team.

The Bills ran passing plays on their final seven offensive snaps of the first half. Run on an extra occasion or two and the Jags probably don’t have enough time to sneak in a last-second field goal to tie the game before halftime, dumbasses.

After being granted a questionable catch along the sideline, the Bills let 31 seconds come off the clock before attempting their next snap. The challenge flag was thrown by Jaguars head coach Doug Marrone after about 29 or 30 seconds. All the Bills had to do was rush up to the line and take a quick snap on first down, but they weren’t alert enough to do so. That cost them 11 yards and a first down on a potential game-tying fourth-quarter drive. Think the Patriots would have let that happen?

The Bills were given a first down on a LeSean McCoy run that clearly left them a full yard short on third down. John Hussey’s crew dropped the ball, extending Buffalo’s fourth-quarter drive. And Marrone didn’t challenge, which is dumb as well.

Carolina’s Mike Adams cost his team 16 yards ahead of its final drive by intercepting a pass downfield on fourth down. The 36-year-old Adams has to know to knock that ball down, especially if there’s no chance to gain significant yardage on a return (there wasn’t). Those 16 yards might have cost the Panthers their season.

The replay official neglected to review the Adams interception. Even though it looked like an incomplete pass, rather than a pick and a fumble out of bounds. Apparently, the league has an incredibly high standard for what a catch is unless it’s made by a player on defense.

The officials in New Orleans nearly gave the Panthers 10 free seconds as Carolina scrambled to try to win the game in the final minute. Tony Corrente’s crew forgot to enforce a 10-second runoff following a Cam Newton intentional grounding penalty, even though that rule is far from obscure and is enforced quite often. It was clear the officials were overwhelmed by a wild moment, which is unacceptable.

Luckily for Corrente and Co., an alternate ran onto the field to alert them just prior to the next snap. Could have cost the Saints their season.

Cam Newton was allowed to return to the Panthers-Saints game soon after taking a massive hit to the head and falling to his knees on the way to the sideline. The team claimed he cleared concussion protocol, but that’s impossible since he didn’t even go to the locker room to be checked.

This "Cam Newton's visor poked him in the eye" is the greatest storyline in the history of sports. And I'm saying that as a former WWE wrestler. Watch the video, you don't collapse after that him because you need ice on your face. It's a #concussion. pic.twitter.com/fgsMiai3et

NFL's new concussion-related rules say any player who stumbles or falls when attempting to stand must be taken to the locker room for an evaluation.

That’s about it. Better luck next weekend, NFL. You fools.