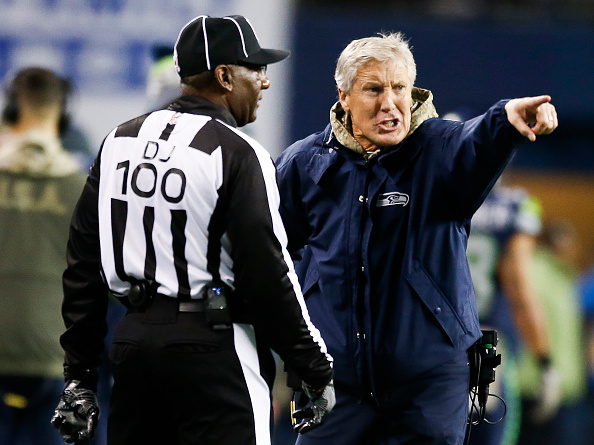 This Weekend in NFL Stupid highlights the dumbest moments and decisions in football throughout the season. And in Week 11, the majority of the stupid took place on Monday Night Football between the Atlanta Falcons and Seattle Seahawks.

Oh, and they had no timeouts.

Oh, and it was a shovel pass to a backup tight end from 20 yards out.

Oh, and they wound up losing by three points.

After an unnecessary roughness penalty gave the Falcons a chance to kick off from midfield, they ignorantly hammered the kickoff through the end zone

Maybe my biggest pet peeve in sports. Just pop the damn thing way up in the air inside the 20 and let your coverage teams run under it. Or just freakin’ bust out a surprise onside kick, in which case the worst-case scenario (not recovering) probably gives the Seahawks the ball on the 35-yard line, which is only 10 yards removed from where they get it when you piss away a gift by crassly smashing the ball into the stands.

Not a lot has been going right for the Kansas City Chiefs of late, thanks in part to the fact quarterback Alex Smith has begun to once again show signs of being Alex Smith. He’s lost the ability to hit on big plays with the deep ball, which has to be frustrating for head coach Andy Reid. But Sunday’s offensive struggles by both the Chiefs and their opponent, the New York Giants, were clearly related to the blustery conditions in New Jersey.

That’s why it’s so baffling that Reid allowed his tight end, Travis Kelce, to do this on a 2nd-and-10 play in the fourth quarter of a tie game…

Travis Kelce with one of the most impressive INTs a tight end has ever thrown #KCvsNYG pic.twitter.com/bDEtLUnc42

The moment that left Kelce’s hand, we all knew what was coming.

You’re a professional quarterback, you have to know better. Look at how much time the guy had on this 4th-and-6!

4th & 6. Routes rolling right with Hundley. Takes a sack. Two things:
1. Don't take a sack on 4th down.
2. Hard to tell from broadcast, but it doesn't look like any routes are run at the sticks. #Packers pic.twitter.com/T5T05Y3qLE

He also held on for more than three seconds on a 4th-and-11 play.

While fighting for extra yardage after a catch, Steelers wide receiver Antonio Brown lost possession of the ball at the Titans’ 42-yard line. Fellow receiver Martavis Bryant recovered the fumble at the 32-yard line, and a few plays later the Steelers made a field goal from that spot to close out the half.

But if anyone other than the player who fumbled advances a fumble in the final two minutes of a half, the ball is supposed to go back to the original spot of the fumble.

“That spot was not correct,” Titans head coach Mike Mularkey said after the game, per ESPN.com. “The spot cost us a field goal. It cost momentum. It cost a lot of things.”

He’s right, the game was still within reach at that point, but that kick gave the Steelers a two-score lead right before halftime and they wound up pulling away in the second half.

Thing is, everyone knows this rule. It’s been around for nearly four decades, and was introduced as a result of a famous incident in which Ken Stabler deliberately fumbled a ball forward that resulted in a touchdown. How the hell do NFL officials miss that?

Yes, we all make mistakes, but this was a pretty stupid one.

Down by six points midway through the fourth quarter, the Cowboys punted from the Philadelphia 39-yard line

The reward (giving your defense an extra 20 or 30 yards to work with) isn’t worth the sacrifice (forfeiting a chance to convert and score to take the lead or reduce the deficit). Why do so many coaches continue to fail to realize this?