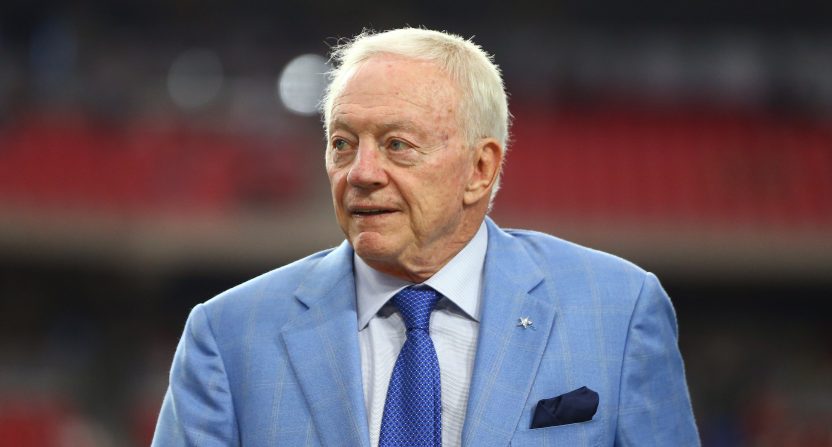 After Thursday’s first round, the 2018 NFL Draft is technically less than 15 percent complete.

With so many recognizable names still available and teams surprisingly not filling needs or taking players that seemingly would have been good fits, there are plenty of questions to be answered. And what are the ramifications of the draft picks that have already been made, the 32 players who have been selected thus far?

Here are the key questions we have with one round in the books, and the draft resuming Friday evening:

1. Why did the Arizona Cardinals give $20 million to Sam Bradford?

This March, the Cardinals signed veteran quarterback Sam Bradford to a one-year, $20 million contract. One month later, they traded up in the draft to select supposed future franchise quarterback Josh Rosen. So you’d have to think the Cards already regret the Bradford signing.

I know teams have to cover their asses because they can’t predict what’s going to happen in the draft, and it’s possible the Cardinals only loved Rosen and didn’t expect him to drop within their range. But the fact that they were in on a potential first-round quarterback is all you need to know.

If you’re actively trying to acquire a new quarterback, you don’t pay $20 million to a stopgap. Instead, you do what the Buffalo Bills did and commit about $5 million a year to a capable backup who can temporarily serve as the starter.

Rosen is the most polished, NFL-ready quarterback in this draft class. He won’t likely need more than a few weeks to prove that he’s worthy of the starting job. That’s great news for the Cardinals, but it also means they probably just wasted $20 million.

2. Where do the Dallas Cowboys go from here at the wide receiver position?

The Cowboys had their pick of the quarterback litter in the No. 19 spot, but instead of selecting D.J. Moore or Calvin Ridley they went with a red-flagged pass-rushing project in Leighton Vander Esch. It was one of the most shocking moments of the night, because now Dallas is left with just Terrance Williams, Allen Hurns, Cole Beasley, Ryan Switzer and Deonte Thompson atop the receiver depth chart.

With Moore and Ridley gone, the Cowboys might be gambling that Courtland Sutton and/or Christian Kirk will drop to them in the No. 50 spot, but that’s highly unlikely and they don’t have a ton of ammunition to move up. If they find a way to land one of those two, they’ll look good. If they don’t, quarterback Dak Prescott could have a lot of trouble getting back on track in his third season.

3. Where will the rest of the quarterbacks land?

Five signal-callers were selected on Thursday night, but Mason Rudolph, Luke Falk and Kyle Lauletta are all considered to be Day 2 talents (and there was even a chance Rudolph could have gone in Round 1). Who might be in on those three Friday night?

Watch for the New York Giants, who could try to land a potential Eli Manning successor with the second pick in either Round 2 or 3. I’d also look out for…