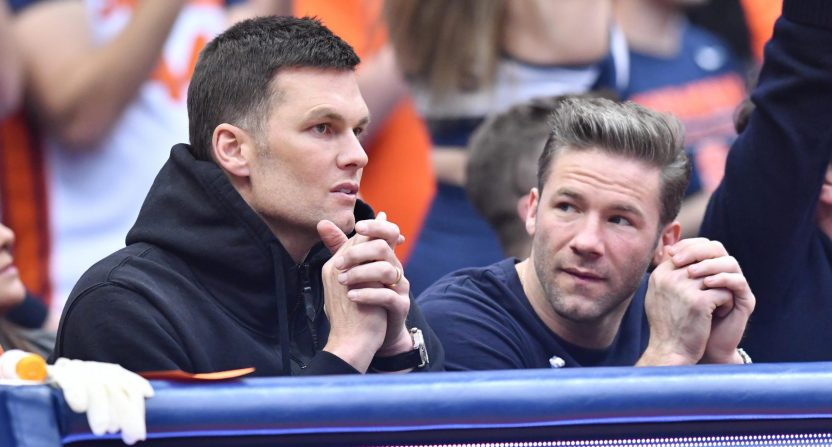 With a little less than two weeks until the start of the NFL free agency period, the San Francisco 49ers have stepped up as a rumored contender to land Tom Brady. On the surface, this sounds like it would be a storybook end to Brady’s career. After winning six Super Bowl’s, he comes back to his childhood and hometown team for one final run at a championship. And that ending would be even better if not only Brady wins a Super Bowl with the Niners, he ties them with his former team (and the Steelers) for most Super Bowl wins ever.

This, of course, ignores the elephant in the room by the name of Jimmy Garoppolo. You know, the young talented QB who was once Tom Brady’s successor and had to be traded out of New England that got the 49ers to the Super Bowl in his first full season with the team. Yes, that quarterback.

That’s where this story ultimately unravels, or does it?

Personally, this sounds like a completely implausible rumor brought on by somebody else in an ulterior motive to make something else happen. It’s insane to cut loose a likely franchise quarterback who is potentially set to take the 49ers to the Super Bowl many times over the next decade. Even if it is in exchange for the GOAT.

If you think about it, and think like an NFL executive, this seemingly strange rumor might happen. And while I personally don’t believe Tom Brady will be wearing 49ers red, here’s three reasons why that no matter how implausible, it could happen.

1) One thing that keeps getting chipped away is the aura that team executives and coaches know what they’re doing. Especially among quarterbacks, officials as a whole are struggling to evaluate signal callers and coaches and GM’s love and hate players for a variety of reasons. Some of which may or may not make that much sense. The interview portion of the Combine hinges on questions like whether or not someone would rather be a dog or cat in order to measure how much they want a player.

Right now, the prevailing logic is that Garoppolo is great but there’s question marks on if he can make it to the next level. Watch most debate shows over the past month or so and they’ll tell you that. There’s reports that head coach Kyle Shanahan and GM John Lynch have concerns about Garoppolo so people aren’t thrilled with the quarterback. If they feel Brady would ease their fears, they may feel it’s best to go for him.

2) The shelf life of a head coach or general manager is short for most NFL teams. It’s easy for an outsider to look at getting rid of Garoppolo for Brady and feel it’s a horrendous long-term move but that’s assuming Shanahan and Lynch are thinking long-term. Coaches and GM’s can get fired all the time. Why should they bother thinking long-term when there’s a pretty good chance they’re not going to be there for the success?

This might not be what many fans want to hear but if the decision makers believe they won’t be around that long, they’re more willing to throw caution to the wind and go “Super Bowl or bust” on one or two seasons and worry about how bad the future gets when (or if) they cross that bridge.

Doesn’t this seem like the ultimate plan for the Patriots head coach to bring back the quarterback he drafted as the heir apparent to Tom Brady?

This is going to go a bit conspiracy theory but stay with me down this rabbit hole. Belichick drafted Garoppolo knowing he needed to have one eye toward the future. But when Brady stayed on and was still winning Super Bowls, Garoppolo needed to go. Belichick traded Garoppolo to the 49ers for a second round pick, something that seemed low for someone like Belichick to accept. Adam Schefter later said that it took Belichick five minutes to get the trade done and theorized that Belichick kept Garoppolo away from the Browns in order to give him a better situation in San Francisco.

Fast forward to 2020, the Patriots have reportedly waited to talk to Brady about re-signing and when they finally talked, the Boston Herald reported that the call between Brady and Belichick “didn’t go well.” Suddenly, we’re getting all these reports out of Boston that Brady being back was “not looking good” and it’s involving a player and team notorious for having nothing leak.

This is pure speculation but what if this was all Belichick’s idea? Maybe the initial trade wasn’t and Belichick wasn’t thinking that far ahead but now that it’s realistic Brady can leave New England, Belichick saw his opportunity and is nudging Brady to the West Coast. Belichick has been able to make a trade with all 31 teams as Pats head coach and GM and he has gotten the better end of most of those trades. Belichick plays chess while everyone else plays checkers and I wouldn’t put it past Belichick that he’s behind the scenes pulling all the strings and he sets himself up for long-term success.

Frankly, I don’t see what people have against Garoppolo. Yes, the 49ers got to the Super Bowl by running the football and Garoppolo threw a rather regrettable interception in the Super Bowl but he’s still one of the better quarterbacks in the league, he’s only going to get better, and the 49ers are considering getting rid of him for a 42-year-old who may have a couple seasons left.

Ignore the fact Garoppolo spent three years watching Brady and he has a career 21-5 regular season record, immediately turning around a 49ers team who was 5-11 in 2015, 2-14 in 2016, and 1-10 before Garoppolo won their final five games in 2017. And when you consider the Niners went 3-10 after Garoppolo tore his ACL, it’s looking more and more apparent the guy is better than some people give him credit for. At the same time, there is a scenario where this is all plausible. Even though it sounds insane, there’s a chance that Brady to the 49ers (and Garoppolo to the Patriots) might actually happen.

Man, we really need this offseason to end.