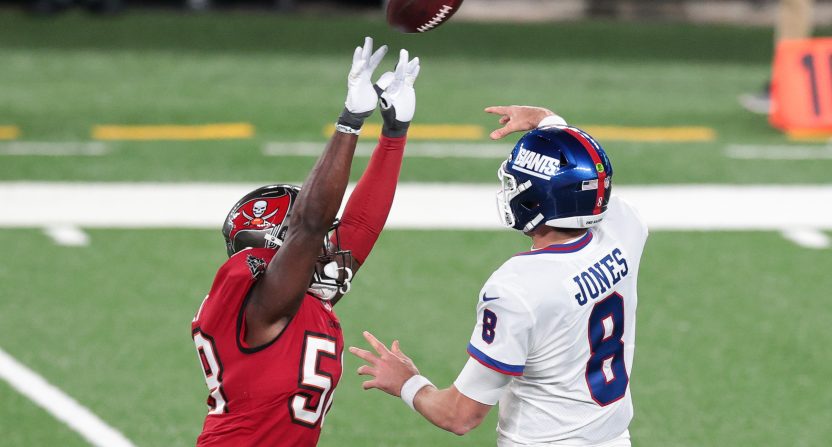 The Super Bowl hopeful Tampa Bay Buccaneers held off the one-win New York Giants 25-23 on Monday Night Football. Tampa Bay was a 12.5-point favorite. Here are our main takeaways from the game:

The first half of this game went the opposite of what everybody expected. The Giants scored the first touchdown of the game shortly after Tampa Bay’s Ronald Jones fumbled the ball away at the Buccaneers’ 12-yard line.

Ronald Jones fumbles for the Bucs, and the Giants take advantage with this incredible Dion Lewis TD catch. 7-3 Giants early on MNF. pic.twitter.com/sZh2BaY567

And the Giants took a 14-3 lead on a Wayne Gallman touchdown with 1:46 to go in the first half.

The Giants have a 14-3 lead over the Buccaneers, just as we all saw coming. pic.twitter.com/6Fb9kUd9Gw

But the Giants only scored nine points the rest of the way, and allowed 10 points following Daniel Jones turnovers. Jones’ second interception came while the Giants had a good drive working at the Tampa Bay 34-yard line with a 17-15 lead in the fourth quarter. ESPN’s Brian Griese said, “I don’t know how many times you have to make the same mistake — right? — before you learn your lesson.”

"I don't know how many times you have to make the same mistake — right? — before you learn your lesson."-Brian Griese on Daniel Jones. https://t.co/PryxbrrwCv

In the final 30 seconds, Jones made a great pass to connect with Golden Tate for a touchdown to bring the Giants to within two. But on the two-point conversion, he made a badly inaccurate pass on a play that should’ve worked.

Contact on the 2-point conversion, but the refs pick up the flag. Great throw by Daniel Jones followed by a bad throw, summarizing him quite well. pic.twitter.com/rQIRLUrMCU

The Giants easily could’ve won this game, but the typical mistakes of a 1-7 team showed up too much in the second half.

Bucs looked much more like themselves in the 2nd half

The first half was probably the worst half of football the Bucs will play the rest of this season, on both sides of the ball. They turned things on in the second half, scoring 19 points and making big plays on defense.

Brady to Gronk TD, something we've seen many, many times before. 15-14 Bucs on MNF. pic.twitter.com/5FAPAnFg2D

What a catch by Mike Evans! Bucs back on top. pic.twitter.com/4elQuv1Bh6

This would’ve been a brutal loss for the Bucs, but they found a way to get it done in the end like title contenders do. Expect them to take practice seriously this week and come out with much more conviction in a Sunday Night Football showdown against the New Orleans Saints.

Many Giants fans are surely okay with the loss, because it keeps the organization very much in the Trevor Lawrence and Justin Fields sweepstakes.

If the Jets just manage to win 1 game this year and the Giants lose out, Big Blue would get Trevor Lawrence due to strength of schedule as of this moment.

Just sayin, it could still happen for them as long as Daniel Jones doesn't screw around and win some games like this one.

That’s not to say that the Giants would definitely draft Lawrence or Fields in the position (even though they should), considering that they just used the No. 6 overall pick on Jones last year.

But we’re not seeing nearly enough to believe that Jones is “the guy” for the Giants going forward. The flashes come every game, but for every “Danny Dimes” toss, we see several more brutal throws and decisions. The touchdown/two-point conversion sequence showed it off perfectly.

Yes, some of it is his supporting cast (losing Saquon Barkley as a great running/receiving threat out of the backfield hurt, and the Giants are rolling with a young offensive line), and the growing pains are natural for a young quarterback.

But some of the issues are very concerning for a quarterback through 20 starts, particularly in the turnover department. And protecting the football isn’t a trait that usually goes from  “alarmingly bad” to “not an issue” for quarterbacks.

Daniel Jones now has 12 games since the start of last season with multiple turnovers, 3 more than any other player in that span. pic.twitter.com/fHqyQ8raVg

Daniel Jones has a turnover in 20 of his 21 career games https://t.co/fzJT2fxpxe

Daniel Jones has 13 turnovers this season, second most in the NFL behind Carson Wentz (16). pic.twitter.com/XG3Hh6uRrU

The ability is clearly there, but there needs to be far more consistency and far fewer turnovers.

Until we see evidence of that happening, we can’t assume Jones is the Giants’ long-term quarterback. At the time being, he shouldn’t even be guaranteed of being the starter next season (especially if the Giants land a top-two pick). This is the most important position in sports, and the Giants are a one-win football team with a terrible offense. They need to be real about this situation if there aren’t clear strides made by Jones in the coming months.