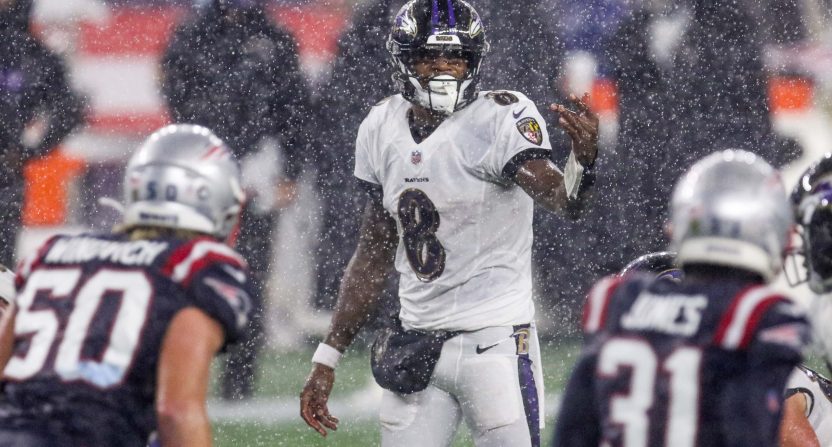 The New England Patriots took down the Baltimore Ravens 23-17 on Sunday Night Football, and as a seven-point home underdog. Here are our takeaways from the Patriots’ win:

A total stinker from the Ravens

We wrote on Saturday night how the Ravens were flying under the radar perhaps more than they should be when talking Super Bowl favorites, but maybe this is why? They were awful in their playoff game against the Tennessee Titans last season, they were pummeled by the Kansas City Chiefs on Monday Night Football in Week 3, they lost their most meaningful game so far this year in Week 8 against the Pittsburgh Steelers, and now they lose on SNF to a Patriots team that has looked terrible over the last several weeks.

How it's going right now for the Ravens. pic.twitter.com/RsFYhBOaWU

We shouldn’t jump to conclusions that the Ravens can’t win the big/primetime games, but performances like this one aren’t helping the perception.

They can easily change that perception by just winning games in this upcoming January, of course. But first they have to get there, and right now, they would be the final team in (the No. 7 seed) at 6-3 in an absolutely loaded AFC playoff picture. That’s while two teams “in the hunt” are also 6-3 (more on that later). Additionally, falling to 6-3 while the Steelers are 9-0 makes the chances for a division title pretty slim at this point; Five Thirty Eight gives the Ravens just a 9% chance to win the AFC North now.

To be fair, the elements likely played at least a part in Sunday night’s game, and may have slowed down the Ravens’ offensive attack. Here’s how the conditions looked on the final Ravens play:

The Patriots secure the SNF upset victory over the Ravens in a downpour. pic.twitter.com/CH2q53zdkZ

Hard to believe that’s the same Pats team from MNF

The Patriots looked absolutely brutal against a winless New York Jets team six days ago. Joe Flacco looked like Patrick Mahomes against the New England defense. But on Sunday night, they really played an all-around good football game against a really good team to earn a victory.

Cam Newton didn’t throw much (with the rain and wind likely playing into that), but was very efficient: 13-of-17, for 118 yards, one touchdown, no interceptions, and with a 114.3 passer rating. He also added a touchdown on the ground.

The Patriots have a 20-10 lead over the Ravens on SNF. pic.twitter.com/D921tD8Jzu

And the Patriots got a passing touchdown from… wide receiver Jakobi Meyers. He looked like a legitimate quarterback on this beautiful throw to Rex Burkhead.

Jakobi Meyers shows off the beautiful deep ball on a Patriots touchdown pass to Rex Burkhead.

The Patriots did enough defensively against Lamar Jackson and company, as the score would suggest. Again, the elements may have factored into this, but it was a significantly better effort defensively than what the Patriots did against a far worse offense less than a week ago.

The Ravens need to figure it out quickly, because they follow this SNF game with two huge games.

First, they have a rematch with the Titans on Sunday in Baltimore. Tennessee blew out the Ravens 28-12 in January, with Derrick Henry running for 195 yards in the upset playoff victory. This alone would make for enough storylines, but it’s a truly significant game now because of the standings. The Ravens and Titans are two of the seven AFC teams that currently have a record of 6-3. And if the playoffs started today, the Titans would be left out of the playoffs due to tiebreakers. So, every game is crucial for these teams in this bunched-up race, and especially in these head-to-head games for tiebreaker purposes. That makes Sunday’s game particularly important for each team.

And the Ravens would really like to not be on a two-game losing streak when entering their second meeting with the Steelers, which is in Week 12. Any sliver of hope for Baltimore’s AFC North title chances (essentially) requires a win over the Steelers in the rematch. And if the Ravens lost both the Titans and Steelers games? Well, all of a sudden they would be 6-5, and again- in a very loaded AFC playoff race that currently has nine teams with records of 6-3 or better.

The Ravens will likely be fine, and their schedule softens considerably after Week 12. But they could really use a well-played game and victory over the Titans to get the team mojo back where it was- and to not make their playoff positioning much more stressful than anticipated.