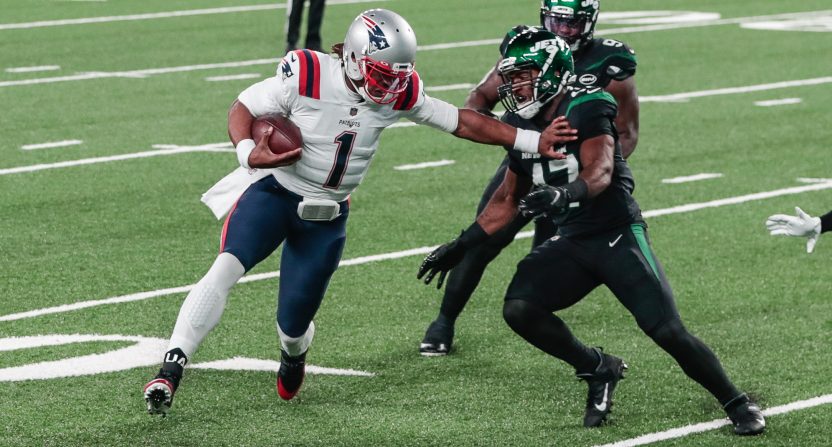 The New England Patriots came from behind to take down the New York Jets 30-27 on Monday Night Football. Here are our main takeaways from the Patriots’ win:

Not exactly a win to feel great about for the Patriots

A win’s a win, but the Patriots (3-5) looked absolutely awful vs a winless Jets (0-9) team through three quarters. Joe Flacco and the Jets took a 27-17 lead into the fourth quarter.

27-17 Jets now. This TD was too easy. #MNF pic.twitter.com/wSjGkEVKYk

The Patriots turned it up a notch in the final six minutes, with some help from a Flacco arm punt.

Cam Newton scored his second rushing touchdown of the night to tie the game 27-27 (after the extra point) with under two minutes remaining.

The Patriots tie it up (after the XP) 27-27 with under 2 minutes remaining. #MNF pic.twitter.com/gHmWwvvF8x

And Nick Folk drilled a walk-off 51-yard field goal to give the Patriots a 30-27 victory.

But the Jets also "win" by increasing their chances to draft Trevor Lawrence. pic.twitter.com/B0GRDEjJtP

Again, the Patriots are surely happy to find a way to come away with a victory- and any victory is tough in the NFL. But if they don’t improve their play significantly, it’s hard to see them winning more than a couple games — if even — the rest of the way. Right now, Bill Belichick’s team would be underdogs on every remaining game on their schedule… except for against the Jets in Week 17. And we just saw how that game shouldn’t be viewed as an easy victory either.

Aside from his horribly-timed interception, Flacco was actually quite good. Flacco finished the night 18-of-25 for three touchdowns, one interception, and a 128.7 passer rating. The 35-year-old statue wasn’t even sacked until late in the fourth quarter.

The 0-8 New York Jets have a 20-10 halftime lead on MNF, in a game that probably says a lot more about the New England Patriots. pic.twitter.com/3xrTWEiZ9i

The Jets have scored 20 points in the 1st half of a game for the first time since 2019 Week 11 at Washington.

Their most points scored in a 1st half this season prior to tonight was 13 in Week 4 vs the Broncos. pic.twitter.com/iQj1IM5K3I

While at least some of it was as much on how bad the Patriots’ defense was in this game, Flacco truly looked far better than Sam Darnold has recently – -and perhaps ever — with the Jets. Flacco threw for as many touchdowns in this game as Darnold has all season, and while Darnold has six interceptions — and a 65.9 passer rating — to go with it.

Many evaluators have given Darnold a bit of a pass — no pun intended — for his poor quarterback play, considering the train wreck of a situation he’s involved in. But fairly or unfairly, how Flacco looked with this team in front of many viewers on Monday Night Football isn’t good for Darnold’s stock.

When the Jets inevitably draft a quarterback in the upcoming offseason, it’s fair to assume that they’ll seriously explore trades for Darnold. But their leverage isn’t going to be very high in trade talks, both due to everybody being aware that the Jets will be looking to get rid of him, and because he hasn’t shown enough for an organization to feel confident in giving up premium draft capital for him.

There’s still time this season for Darnold to show that his talent — which he definitely flashes on occasion — can flourish in somebody else’s offense. But at the moment, the 2018 No. 3 overall pick’s value just isn’t that high, and it’s hard to see him being viewed as any team’s clear No. 1 quarterback entering the 2021 season.

This was a tank win for the Jets

But seriously, many Jets fans were definitely sweating this one out until the final play, before celebrating the loss. Let’s face it- getting closer to championship contention is much better than winning one game instead of zero. And being able to draft Trevor Lawrence or Justin Fields will get them much closer to contention than any other route out there on the surface.

Had the Jets won this game, they could fall to the No. 2 pick — for the time being — with a Jacksonville Jaguars loss to the Green Bay Packers next week.

If the Jets win, they could be passed for #1 with a Jags loss in Green Bay next week.https://t.co/lnbhA07mro

Instead, the Jets remain in the driver’s seat for the No. 1 pick, and their chances to go 0-16 remain very real.