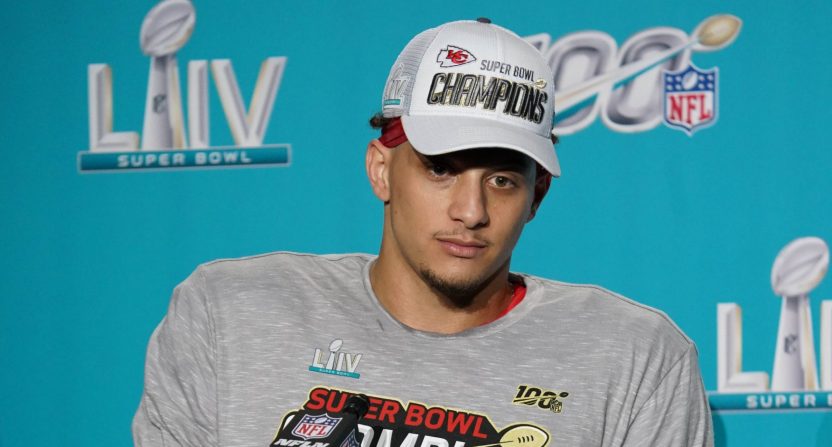 They say you can’t grade a draft for three seasons, which means our report cards for last week’s event are practically useless. But the good news is that it’s now been three years since one of the most memorable drafts in NFL history. Here are updated 2017 NFL Draft grades for all 32 teams:

Arizona Cardinals: D — Second-round safety Budda Baker is good, but the rest of the class — including No. 13 pick Haason Reddick — has done practically nothing.

Atlanta Falcons: C — First-round edge defender Takkarist McKinley hasn’t come through yet, but he’s not a complete bust yet either. Meanwhile, they might have found something special in fifth-round safety Damontae Kazee.

Carolina Panthers: A — They nailed Christian McCaffrey and Taylor Moton in Rounds 1 and 2, while their other second-rounder — Curtis Samuel — is somewhere in between good and bad. The rest of their draft class has been useless.

Chicago Bears: C- — Fourth-round success stories Eddie Jackson and Tarik Cohen save the Bears here, because early-rounders Mitchell Trubisky and Adam Shaheen have failed. They also traded up for Trubisky despite the fact Patrick Mahomes and Deshaun Watson were available, so there’s no way this can be a good grade.

Cincinnati Bengals: D- — That top-10 pick on John Ross III looks terrible, third-rounder Jordan Willis is already gone, and Joe Mixon and Carl Lawson don’t make up for that. This is bad, especially when you consider they could’ve had Mahomes or Watson.

Cleveland Browns: B- — Top pick Myles Garrett looks like he’s becoming a superstar, first-round safety Jabrill Peppers helped them land Odell Beckham Jr., and third-rounder Larry Ogunjobi has become a solid starter. But DeShone Kizer and David Njoku were misses, and they passed on Mahomes and Watson as well.

Dallas Cowboys: B- — First-round edge defender Taco Charlton is already gone, but the Cowboys did find three good defensive backs — Chidobe Awuzie, Jourdan Lewis, and Xavier Woods — outside of Round 1. That saved this class.

Denver Broncos: D- — They’re still waiting for first-round offensive tackle Garett Bolles to truly emerge, and nobody else from a large class has come through.

Green Bay Packers: C — Good thing they found star back Aaron Jones in the fifth round, because the only other member of this 10-player class to make any difference is second-round corner Kevin King. And it’s not as though he’s become a Pro Bowler.

Houston Texans: A — They landed franchise quarterback Deshaun Watson 12th overall, and second-round linebacker Zach Cunningham is solid. They missed on every pick after that, but whatevs.

Indianapolis Colts: C+ — Linebacker Anthony Walker was a good find in Round 5, but the jury is still out on top picks Malik Hooker and Quincy Wilson.

Jacksonville Jaguars: D- — Top-five pick Leonard Fournette has been inconsistent and generally unhelpful (and is already reportedly on the trading block) second-round offensive tackle Cam Robinson has struggled, and mild success from fourth-round receiver Dede Westbrook doesn’t make up for that. Could’ve had Mahomes or Watson.

Kansas City Chiefs: A — Patrick Mahomes. Enough said, right? And they still deserve credit for finding Kareem Hunt in Round 3. Just not a lot of depth with this class.

Las Vegas Raiders: F — Each of their first three selections are already off the roster, and none of the other six have amounted to much.

Los Angeles Chargers: C — Top-10 pick Mike Williams has started to come around at receiver, defensive back Desmond King was a steal in Round 5, and they also deserve love for finding standout back Austin Ekeler as an undrafted free agent. But Day 2 guards Forrest Lamp and Dan Feeney haven’t panned out, and they should’ve taken Mahomes or Watson.

Los Angeles Rams: B — They got good value for Cooper Kupp, John Johnson, Josh Reynolds, and Samson Ebukam in Rounds 3 and 4, compensating to an extent for the fact they didn’t have a first-rounder and missed on second-round tight end Gerald Everett.

Miami Dolphins: C- — I still believe in second-round linebacker Raekwon McMillan, but he hasn’t fully emerged. It’s less easy to buy in to first-round edge Charles Harris, and the rest of the class has been nonexistent except for decent fifth-round find Davon Godchaux.

Minnesota Vikings: B — Running back Dalvin Cook is a star out of Round 2, but third-rounder Pat Elflein has yet to get it together at center/guard, and nobody else aside from fourth-round linebacker Ben Gedeon has done much.

New England Patriots: C- — They had just four picks and none in the first two rounds. Fourth-round defensive end Deatrich Wise Jr. has exceeded expectations, but nobody else has registered.

New Orleans Saints: A+ — First-rounders Marshon Lattimore and Ryan Ramczyk have become stars, as have Day 2 selections Marcus Williams and Alvin Kamara. Those four alone make up one of the best draft classes in NFL history, and third-round linebacker Trey Hendrickson isn’t bad either.

New York Giants: B- — Nice job hitting on defensive tackle Dalvin Tomlinson in Round 2, but first-round tight end Evan Engram has lacked durability and consistency, and nobody else in the class has amounted to much.

New York Jets: B- — They ended up with a tremendous safety duo in Jamal Adams and Marcus Maye in the first two rounds, but the rest of the class has done nothing.

Philadelphia Eagles: C — First-round edge Derek Barnett has been good, not great, while second-round corner Sidney Jones has yet to deliver.  Defenders Rasul Douglas and Nathan Gerry were good finds in Rounds 3 and 5 respectively, but that’s about it.

San Francisco 49ers: C — Solomon Thomas and Reuben Foster is damn ugly coming out of Round 1, third-round corner Ahkello Witherspoon hasn’t been consistently reliable, and only one other member of this class has made an impact. But that player is tight end George Kittle, who’s one of the best fifth-round finds in draft history.

Seattle Seahawks: D — They deserve kudos for finding Chris Carson late, while third-round corner Shaquill Griffin has surpassed expectations. The rest of this 11-person class has been completely useless.

Tampa Bay Buccaneers: B- — Thank goodness for third-round receiver Chris Godwin, who has become a superstar. First-round tight end O.J. Howard has yet to pan out and has now been replaced by Rob Gronkowski, while the rest of the class hasn’t factored in. I do still have some hope for second-round safety Justin Evans.

Tennessee Titans: D — Wide receiver Corey Davis in the top five was ridiculous, and fellow first-rounder Adoree’ Jackson has been good but not great. Linebacker Jayon Brown was a superb find in Round 5, but the rest of the class hasn’t delivered in a significant way.

Washington Redskins: B- — First-round defensive lineman Jonathan Allen hasn’t been consistently strong. Still, they found some diamonds in the rough. Interior offensive lineman Chase Roullier was picked in Tom Brady’s spot and was a huge steal there, while defensive backs Fabian Moreau and Montae Nicholson have exceeded expectations out of Rounds 3 and 4, respectively.