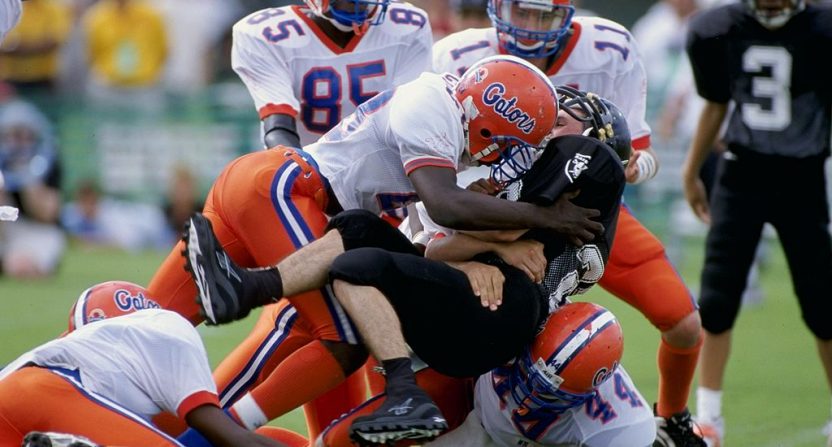 Football has been a centerpiece of American culture for decades, but there’s reason to doubt the sport will be able to maintain that status for decades to come. Concerns over the long-term health effects of players hasn’t done a whole lot to deter current professionals, or even current college or high school players.

The base of the player pyramid, though? That’s in real danger, and if enough parents start to pull their kids into other sports going forward, the whole structure could come toppling down. There’s a lawsuit in California against Pop Warner, filed by mothers of former players who committed suicide and were posthumously diagnosed with CTE.

Via The Los Angeles Times:

California would become the first state to prohibit minors from playing organized tackle football before high school under a proposal made Thursday by lawmakers concerned about the health risks.

Just days after the Super Bowl, Assembly members Kevin McCarty (D-Sacramento) and Lorena Gonzalez Fletcher (D-San Diego) said they are introducing the “Safe Youth Football Act,” legislation that will be considered this year by state lawmakers.

Under the bill, organized tackle football would be allowed starting with high school freshmen.

“The science is clear: head injuries sustained at a young age can harm kids for the rest of their lives,” Gonzalez Fletcher said in a statement. “Developing skills through flag football before high school is sound public policy from a health and safety standpoint.”

You’d likely expect a bill that would so radically alter the youth sports landscape for the most populous state in the nation to stir up plenty of opposition, and it’s true that it will face plenty of obstacles. But if the bill’s backers were afraid about losing the headline battle, they apparently needn’t have worried too much: editorials from the Times, the Mercury News, and the San Diego Union Tribune all underscored their support for the ban.

California is perhaps an outlier of a state politically, but football is still a very big deal there; it might not seem like Texas or the south, but by at least one national ranking system, the state had 6 of the top 17 high school football teams, including #1 Mater Dei. 7 of 247’s top 50 recruits for 2018 are from California. It’s a football state.

That’s manifested in how quickly some people organized opposition.

Via The Sacramento Bee:

They created a Twitter account, SaveCaliforniaFootball, and a matching hashtag. One coach set up a meeting with a Sacramento lobbyist to learn how to engage lawmakers on bills. An online petition opposing the bill collected more than 30,000 signatures in a little over three days.

“At what point do we just bubble wrap our kids?” said Jason Ingman of Natomas, a parent and youth coach who launched the petition. “It’s not a perfect world. We’re never going to take injury out of sports. We can’t just abandon it because we can’t be 100 percent safe.”

It’s weird how quickly that element has come to seem like the fringe, isn’t it? The massive increase in public awareness on the topic of CTE and its link to football is probably to thank for that. Hell, Jacked Up was around on ESPN until 2008. This Pop Warner hits compilation hit YouTube in 2012, and has nearly 5 million views.

Now, at least one state is laying the groundwork for making organized tackle football illegal for kids, and while there’s the predictable outcry, there’s also plenty of public support.

Football, at least in its current form, might not be around much longer.