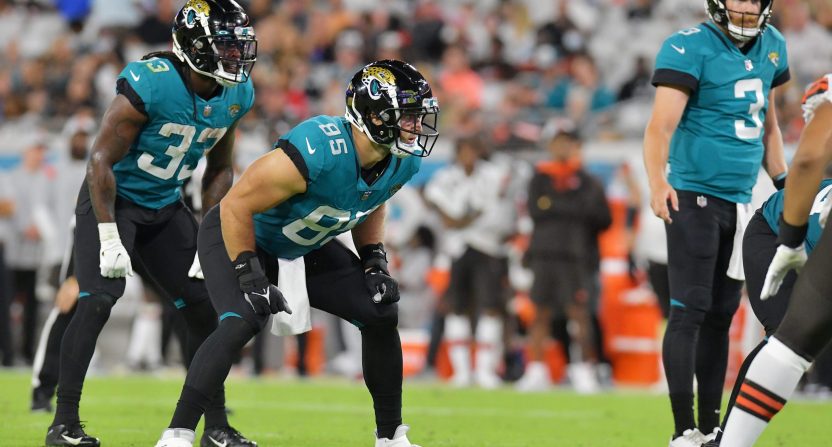 The Tim Tebow tight end experiment for the Jacksonville Jaguars doesn’t seem to be going well.

The 34-year-old former quarterback was fourth-string (with two other players) on the initial Jacksonville depth chart, and proceeded to not look good in the team’s preseason opener against the Cleveland Browns on Saturday night. Tebow played 16 snaps (with no special teams contributions, something that’s important to note for players competing for roster spots), and he had a block that went viral.

Well, after All-22 film became available on Sunday, CBS Sports’ Chris Towers identified an even worse block (attempt) from Tebow. And it came on the very next play.

Honestly, the Tebow block that went viral wasn't even his worst block of the night. This was *the very next play* pic.twitter.com/tINWyJpWSE

we’ve gotta get our jokes off, and we will, but it’s worth saying that this is just … bad for the team. The Jaguars have to make roster cuts by Tuesday and if he’s still around, I don’t know how you take that staff seriously.

This whole situation seems so unnecessary, and especially for a rebuilding team that has a rookie quarterback that they hope will be the franchise guy in Trevor Lawrence, to go with a new coaching staff.

Then again, the person leading that coaching staff is Urban Meyer, Tebow’s college head coach at Florida. Perhaps Meyer is just that stubborn — or delusional — when it comes to Tebow, so we shouldn’t rule anything out. But this does not appear to be a player deserving of an NFL roster spot in 2021.