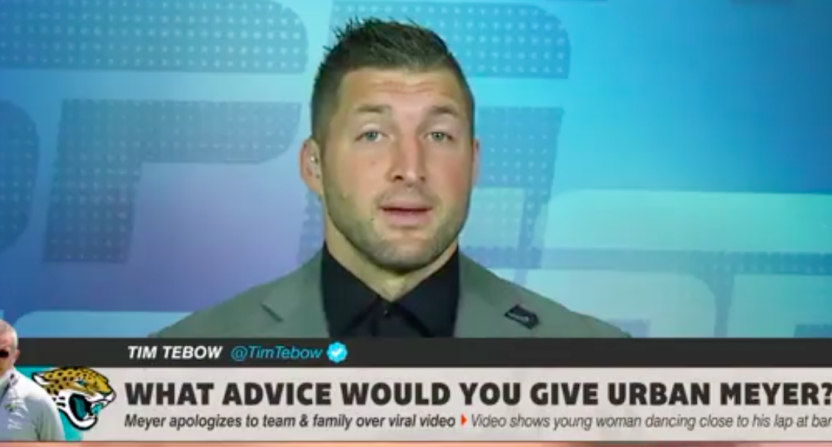 Tim Tebow, who played for Urban Meyer at Florida and briefly played for him as part of the Jacksonville Jaguars preseason roster, has long been a confidant and friend to the head coach. When the season started rough for the Jaguars, Tebow defended Meyer and Trebor Lawrence, saying they would figure things out on the field.

When the videos and photos of Meyer mingling with a young woman at a bar surfaced over the weekend, it set off a firestorm. Meyer has apologized to the team and his players but it’s caused a lot of fallout, including a stern public rebuke from team ownership, his wife leaving social media over hurtful comments, and the damage that the young woman is feeling.

A very somber-looking Tebow was on First Take on Friday morning and naturally, he was asked about the situation. Tebow doesn’t have to wonder what he would say to Meyer because he actually spoke with the coach and his family.

Tim Tebow looks like a hostage having to talk about Urban Meyer on First Take.

“Well, I think first of all this is a very disappointing, frustrating, and honestly heartbreaking situation. When I first saw and heard about what happened, my heart was hurting for Miss Shelley, coach’s wife, someone who I love very much, and his daughters, who I’m very close with, who I’ve talked to both of them this week, and also had the chance of talking with [Urban Meyer]. It’s a very difficult week.

“My advice to him was to apologize, to admit it, to learn from it, and to never, never repeat it. Coach shared with me that it was one of the hardest times of his life. He apologized, but he didn’t need to apologize to me. I know this weighs so heavy on his heart and he is hurting. And I do think for some of the guys he will have to earn back their trust and respect. And I think he really wants to do that. This is not something that anybody in his family takes lightly.

He was in the wrong place and he was in the wrong state of mind and he had too much to drink and that led to bad decisions and I think that’s something we can all learn from, right? We need people there to hold us accountable. To not let us get in tricky positions. To not be in places where temptation can creep in and we’re in the wrong state of mind. One of the important things here that we’ve talked about and that I know he knows is to don’t put yourself in that situation.”

That’s all sound advice, although missing from it is the notion that Meyer should be able to be in a bar, have a drink, enjoy himself, and also have the self-control necessary to not grope a young woman while his wife is home with the grandkids. It’s fair to ask that of an adult man. But that aside, we’ll see if Meyer takes the advice and owns the situation fully. Otherwise, his stint in Jacksonville might be pretty short.