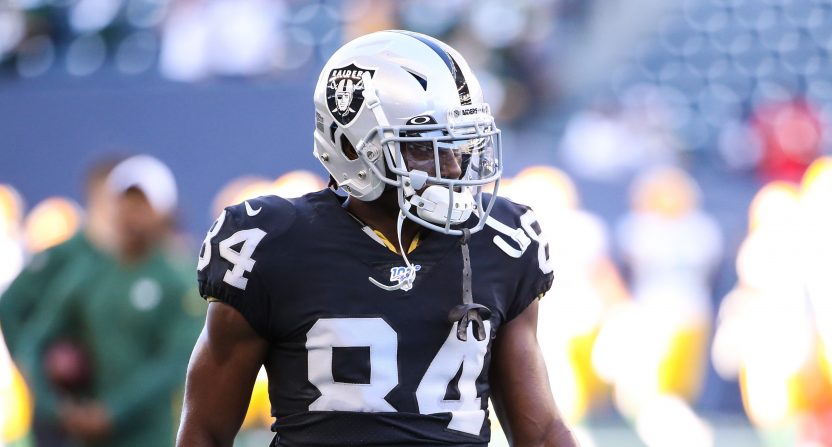 At this point, it’s pretty much a guaranteed that the incident du jour involving diva wide receiver Antonio Brown won’t be the last. Brown went from frostbite-gate to helmet-gate to reportedly threatening to punch his boss in less than six weeks.

More on #Raiders WR Antonio Brown and Mike Mayock yesterday: It did not get physical, sources say. But after a screaming match, Brown told Mayock that he would hit him in the face and then punted the ball… and said, Fine me for that. 💸💸💸

Brown is now, unsurprisingly, facing a suspension from the team that essentially cut him a $30.125 million check earlier this year. And it appears the Raiders already have buyer’s remorse with the petulant wideout.

“There are those around the league who now believe the Raiders could suspend Antonio Brown with the idea of trying to void the $30.125 million of guaranteed money in his contract,” wrote ESPN’s Adam Schefter Thursday. “Which obviously would end his time in Oakland.”

Here’s a thought: The Raiders should move on regardless.

That $30.125 million expense would be a sunk cost for an organization that has already settled on its roster for 2019 and is slated to enter 2020 with more than $60 million in salary cap space. They also gave up third and fifth-round draft picks when they acquired Brown from the Pittsburgh Steelers, but those are sunk costs regardless.

The Raiders made a mistake, and now it’s time to cut losses and move forward.

Brown’s on the wrong side of 30 now, and his rate-based numbers — yards per catch, receptions per game, yards per game and even, to an extent, catch rate — plummeted in his age-30 season with the Steelers. Precedents indicate he’ll continue to decline on paper and otherwise, which is why I said back in February — before all of this Oakland drama — that I wouldn’t recommend touching this guy with a 10-foot pole.

Steelers head coach Mike Tomlin reportedly told his players that those in charge in Pittsburgh tolerated Brown’s behavior and his infamous tardiness “because of what he brings on the field.”

“But the minute production stops,” he added, per ESPN.com’s Jeremy Fowler, “you don’t overlook it.”

The Raiders can’t overlook it. They can’t let Brown push them around.

General manager Mike Mayock is doing his best. He even issued an ultimatum to Brown when he was sulking over his helmet last month:

“He’s upset about the helmet issue. We have supported that, we appreciate that, but at this point we pretty have exhausted all avenues of relief. So from our perspective, it’s time for him to be all in or all out. We’re hoping he’s back soon. We’ve got 89 guys busting their tails. We are really excited about where this franchise is going, and we hope AB’s going to be a big part of it starting Week 1 against Denver.”

But Brown has once again indicated he’s not in, he’s out. The Raiders probably wish he was serious about retiring if he couldn’t play with his preferred helmet. Instead, the right approach is to tell the guy you no longer require his services.

From there you might have a battle on your hands to save all or some of that $30.125 million, but that should be gravy now anyway. This team is better off without Brown’s antics. The sooner it realizes that, the better off it will be.