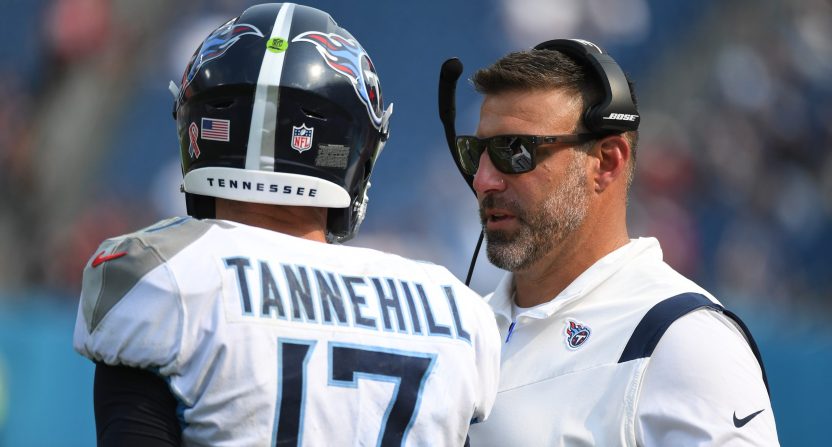 There you have it. The Titans (12-5) might be the least impressive top playoff seed in recent NFL history. They open the playoffs this Saturday against the Cincinnati Bengals at Nissan Stadium. Tennessee is only a 3.5-point favorite, and nobody would be surprised if the Bengals pulled off an upset. Tennessee isn’t even the betting favorite to win the AFC.

This led former Titans safety Kenny Vaccaro to tell Rob Maaddi on the AP Pro Football Podcast, “I think the Tennessee Titans just don’t get the same amount of respect as other teams do, but they’re here to earn it and I don’t think they care. “I think that chip on their shoulder is one of the main reasons why they have the No. 1 seed.”

The skepticism is well-earned.

If you believe in the Titans, you can mount a solid case. They crushed the Kansas City Chiefs 27-3 and beat the Buffalo Bills, Los Angeles Rams, and San Francisco 49ers. However, if you want to make a rebuttal, you can point to the fact that this team lost to two of the worst teams in the league: the New York Jets (4-13) and Houston Texans (4-13). Heck, the Titans came close to being swept by Houston before pulling out a 28-25 road victory in the regular-season finale.

What Tennessee team will show up this weekend?

To be fair, the Titans’ Big Three wasn’t healthy for most of the schedule. Derrick Henry, the 2020 rushing champion, missed nine games with a broken foot. Julio Jones, their prized off-season acquisition, missed seven games due to hamstring issues. A.J. Brown, the top wide receiver, was out four games with a chest injury. Overcoming these setbacks to clinch the No. 1 seed is a big reason why Mike Vrabel is a Coach of the Year candidate.

Henry, Jones, and Brown were supposed to form an unstopped trio. But with them in and out of the lineup, the Titans scored fewer points this season (24.6) than they did last year (29.6).

The good news is that the Titans should be close to full strength.

The first-round bye was important. Henry is expected to make his return, which would be a huge boost against a Bengals defense that will be without tackle Larry Ogunjobi (foot injury). Henry (937 rushing yards, 10 touchdowns) was leading the league in rushing before going down. Even without him, the Titans finished fifth in rushing (141.4 yards per game).

If he’s in game shape, a fresh-legged Henry seems terrifying. But Vrabel is managing expectations.

“I think that’s a good step for him to have contact,” Vrabel said. “It’s been a while since he’s had contact and had to do these things that come close to replicating what’s going to be asked of him in a football game. We’ll have a week to work, see how he feels and make a decision.”

In honor of the NFL playoffs and watching these bums rough each other up this weekend. Here’s Derrick Henry highlights through basically 7 games. pic.twitter.com/M6wcg1ooAF

Another concern: the wide receivers. Brown and Jones had career-worst seasons. Brown seems to be back to normal (he had 11 catches for 145 yards and a touchdown in the victory over San Francisco last month). But Jones was a non-factor this season, eclipsing 100 yards just once and not since Week 2. Two weeks ago, he scored his first touchdown of the season, a three-yard catch against the Texans.

A lack of healthy pass-catchers has affected Ryan Tannehill. He was 20th in the league in passer rating – worse than Jared Goff. He threw 14 interceptions, his most since his second season (17) in 2013. Since joining Tennessee in 2019, Tannehill has excelled at pushing the ball downfield. But with Brown and Jones hurt, Tannehill’s yards per pass plummeted to 7.0.

It’s hard to trust Tennessee because you don’t know what to expect on offense. During their six-game winning streak, they totaled 183 points, including beating Buffalo and Kansas City in consecutive weeks. Then they followed that up by losing three of four, scoring exactly 13 points in each of those defeats to Houston, the New England Patriots, and the Pittsburgh Steelers.

Scoring differential is one indicator of how good a team is. That can tell you more than a win-loss record; outcomes in the NFL can occasionally be random. Tennessee was +65, which ranked sixth in the AFC, behind Buffalo (+194), New England (+159), Kansas City (+116), the Indianapolis Colts (+86), and Cincinnati (+84). Of course, this isn’t a perfect measurement becasue teams face different schedules. Still, those numbers should give you pause when evaluating the Titans.

On paper, the Titans don’t look like the top team in the AFC. They might not have to be to beat the Bengals. But Tennessee will need to play its best football of the season to reach the Super Bowl.