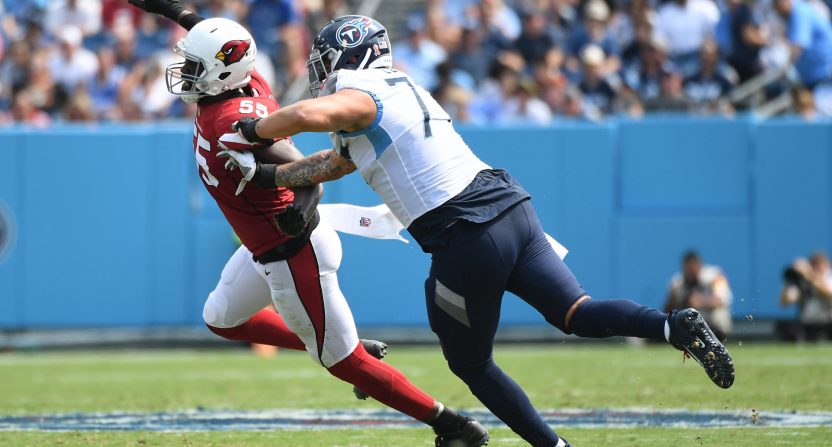 Jones, who is in the last year of his contract and has been vocal about wanting a new deal or trade, has led the NFL in sacks since entering the league in 2012. So there isn’t too much shame in being the guy lined up against Jones given how many offensive linemen have been unable to contain him. That said, it’s still a humbling experience, even if you’re not responsible for every sack.

That was the case on Sunday for left tackle Taylor Lewan, who went as far as to say on Twitter that he “got my a** kicked” by Jones.

On Thursday, Lewan told reporters that part of the problem was that he was too fired up before the game, which was his first since returning from an ACL tear last year.

Taylor Lewan: I got overexcited in opener. When the game came, I felt drained and my legs were heavy. Felt anxiety; more worried about messing up than performing pic.twitter.com/92lQSt0ZIx

“I was more worried about messing up than I was about being better,” Lewan said. The three-time Pro Bowler then went on to say that there was simply no denying that Jones “dummied me all day.”

More from Lewan: I wasn’t accountable in opener. I should’ve calmed my nerves better. Chandler Jones “dummied me all day.”

Admits that the booing hurt, but doesn’t blame the fans pic.twitter.com/IIADrjpxZt

“Chandler Jones is a stud, right? There’s no denying he dummied me all day,” Lewan said. “I have to be accountable. I wasn’t accountable in that game to my team, to myself, to my family, to everyone watching, to you guys, to the fans. And you go in and you get an IV, you’re cramping, and you come back out and they announce you’re back in the game and you get booed from the fans. That stuff happens, man. It hurt, but at the same time, the way I was playing, I don’t blame them. They want the team to do well, they’re not just rooting for me. So I’m sorry for letting them down.

“It’s something that I have to overcome and work through, and I plan on doing those things.”

It’s a refreshing refrain from an NFL player. You don’t usually hear one speak so candidly about getting completely beaten up and overwhelmed. But we suppose if anyone was going to do it, it’d be an offensive lineman. Plus, Lewan is definitely a guy who has had no problem being candid and letting loose.

Lewan has a shot at getting some redemption for himself and the Titans on Sunday when they travel to Washington to play the Seattle Seahawks.