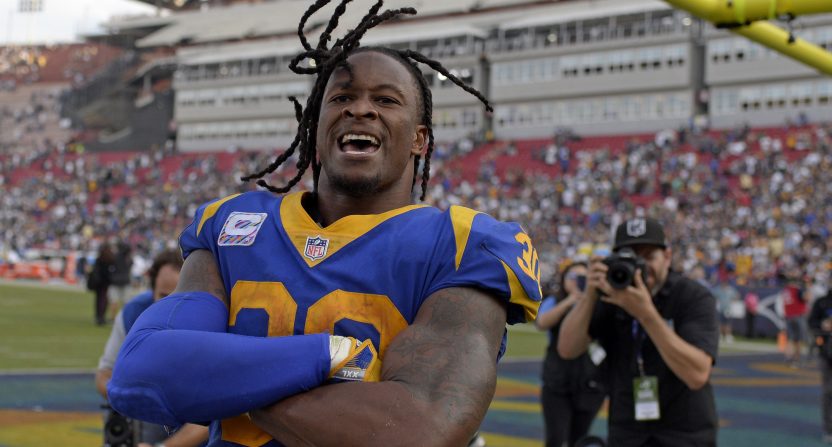 The Rams led the Packers 29-27 with about one minute left on Sunday, when Jared Goff fed Todd Gurley a toss that Gurley ran for a first down on 3rd-and-10 from the Green Bay 21-yard line. The Packers had no timeouts left. The Packers also have Aaron Rodgers, who frequently leads them to late comebacks. You *expect* Rodgers to lead the Packers to a comeback when the opportunity is there (even when it seems that opportunity isn’t realistically there).

So, rather than score a touchdown that he could’ve had, Gurley chose to go down inbounds inside the five-yard line.

Todd Gurley seals the game with a first down and the Rams are 8-0 🔥 @TG3II pic.twitter.com/gx2zVNbJky

It’s a very smart play by Gurley. Sure, a touchdown likely seals the game anyway, and it would make Gurley’s stats look fancier. But going down there would require the Rams fumbling a snap on a kneeldown to lose.

If Gurley scores a touchdown and Greg Zuerlein misses the extra point, it’s an eight-point game. Odds are still highly, highly in the Rams’ favor with under a minute left and Green Bay having no timeouts and needing a two-point conversion in addition to a touchdown. But that *possibility* is still there, especially with Rodgers at quarterback.

The bottom line is that the odds the Rams fumble a kneeldown snap are much lower than the odds Zuerlein misses an extra point (which is also a small chance, but these things happen; see: Justin Tucker last week), and it’s not worth giving Rodgers any opportunity whatsoever.

So, Gurley made the right football play, and the Rams kneeled to come away with a 29-27 victory that has them 8-0 on the season.

But it’s a play that pissed off many fantasy football owners, obviously.

It’s also a play that pissed off many bettors, because the Rams closed as 7.5-point favorites, and the over/under total was 57 points. With a touchdown and extra point there (and no ensuing points from the Packers), the Rams win by eight points. A touchdown would make the “Over” hit as well.

According to the Las Vegas Review-Journal’s Todd Dewey, Gurley’s decision to go down resulted in a $1 million-plus swing at Vegas sportsbooks.

Todd Gurley going down on his own at the 4 instead of scoring a TD for the likely cover by the Rams over the Packers resulted in a $1 million-plus swing at LV sports books: mid 6 figures @WilliamHillUS and @MGMRaceSports 6 figures @SuperBookUSA lil less than 6 @CaesarsEnt #RJnow

Gurley had the correct reaction when the media brought up his decision to go down hurting fantasy teams and bettors.

Todd Gurley, on stopping short of goal line to secure the win and run out the clock: "Man, forget fantasy and forget Vegas. We got the win, so that’s all that matters."

But you can be sure that tons of fantasy owners and bettors didn’t have the same reaction to the play. Here’s some Twitter reaction to Gurley stopping short of the end zone:

Todd Gurley just cost me the over the game and the 2nd half. Really fun.

@TG3II ain’t no way you just blew this money like that fam pic.twitter.com/9G101PcsmD

Was going to ask to see people's worst bad beats in fantasy football if you own Todd Gurley but nevermind it actually happened to me. pic.twitter.com/8CIvMGCCQZ

Todd Gurley. I know that was the right thing to do but pic.twitter.com/j4XbmFL9Mp

Me in Fantasy, I would have won with that TD pic.twitter.com/Za8KH5hPeJ

Todd Gurley fantasy owners like myself everywhere when he fell down instead of scoring pic.twitter.com/94p61SzcHj

Hey @TG3II we gotta talk bro.. I appreciate the great fantasy outing and the good sportsmanship but you could of scored on that last carry.. I lost the whole game!! @RamsNFL @ESPNFantasy pic.twitter.com/EutlVHVrfa