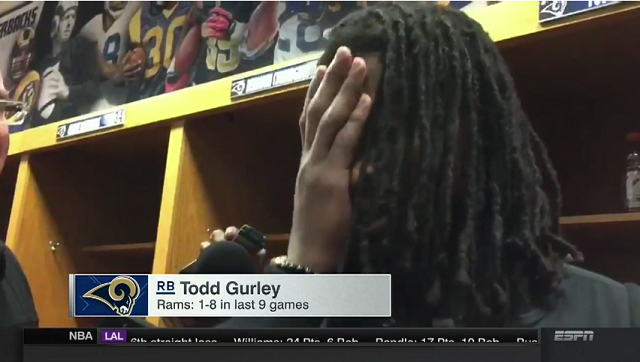 NFL football is back in Los Angeles! At least on the opposing team.

The Rams are a full-on dumpster fire, with losses in four straight games, and three of those losses coming by at least 16 points. They’re mainly an abomination on offense, ranking dead-last in the NFL in points scored (194 points; 14.9 points per game) and yards per game (and they’re usually playing from behind). The winless Cleveland Browns have scored 13 more points than the Rams!

And the only time the Rams actually won a game over their last nine games? They did so by scoring just nine points in Week 10, beating another train wreck in the New York Jets. Los Angeles has scored at least 14 points just twice in the last seven games.

The Rams suffered their latest embarrassing loss on Sunday by the score of 42-14 to the Atlanta Falcons in Los Angeles, in front of many empty seats:

@EmptySeatsPics it's comically bad. These are shots of the Rams side. pic.twitter.com/4isQOx7TW1

@EmptySeatsPics hmmm LA must be a baseball town. Rams should move somewhere they're appreciated… pic.twitter.com/ORB67fC5h8

Second-year running back Todd Gurley is fed up with the offense, and told the media after Sunday’s loss that the Rams “look like a middle-school offense out there”:

Gurley added that he doesn’t know how the Rams are going to fix the offense, but we know the answer to that is “having competent quarterback play” and “having other weapons on offense”. The Rams have neither of those things, and aren’t going to before the end of 2016.

And perhaps much longer than 2016.

The most alarming issue is of course at quarterback, where the Rams used the top overall pick of 2016 on Jared Goff, after giving up a ridiculous haul to be able to select him. If you need a reminder (via ESPN):

They gave up all of that to be able to draft this guy:

Summing up the #Rams season in one video https://t.co/yF0NSMg4W0

On the season, Goff has four touchdown passes, five interceptions, a 55.1 completion percentage, and a 65.3 passer rating. Yes, he’s only 22, and he’s certainly not the first quarterback to look lost in their rookie season. But, it’s a very discouraging start, especially when you consider that the Rams went all-in to be able to take him. They know they needed to hit on him given the assets they gave up, and the trade could severely set the franchise back if his struggles continue. And even if he does start figuring it out, they need to be able to find weapons for him, something that is more challenging after giving up their 2017 first and third-round selections to the Titans.

Now, to be fair, Todd Gurley hasn’t been producing either. He’s averaging a very bad 3.3 yards per carry, with just one carry of at least 20 yards over 227 attempts. However, we saw how good he looked as rookie last year (4.8 YPC, 10 TD, 1,106 YDS), and there’s reason to believe that his issues have largely been due to the team’s inability to pass the ball. Stack the box to stop Todd Gurley, or make Jared Goff/Case Keenum beat you? Pretty easy call if you’re the opposing defensive coordinator.

It’s very possible things just get worse for this team before they get any better, and it will be interesting to see if head coach Jeff Fisher and general manager Les Snead are allowed to see it through (they shouldn’t be). On the topic of Fisher, this clip from Hard Knocks in August certainly looks even funnier now (NSFW language):