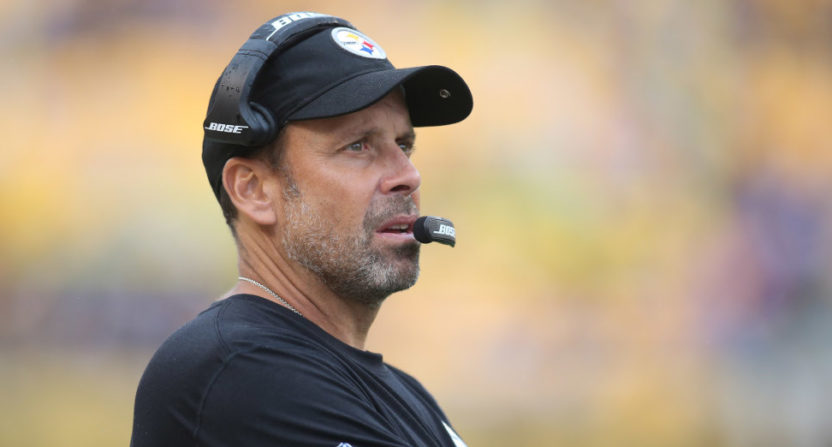 The story of Pittsburgh Steelers’ offensive coordinator Todd Haley suffering a hip injury after being shoved to the ground outside a local bar on New Year’s Eve has taken another turn. At  first, the only word was that Haley was “injured in a fall.” Now, Ed Bouchette of The Pittsburgh Post-Gazette has more details, including a source saying Haley has a shattered pelvis and Haley himself talking about it being “a situation…not of my doing.”

Todd Haley, ailing from what a team source told the Post-Gazette is a shattered pelvis and a badly bruised left side, called the New Year’s Eve incident a “situation” Thursday afternoon.

“A few nights ago unfortunately I was in a situation,’’ said Haley, the Steelers offensive coordinator who spent two days in a hospital for injuries he sustained after reportedly being shoved outside the North Shore bar.

“The situation, though not of my doing, has been made clear to me by the Steelers that it is a non-issue to both the team and the Steelers organization.’’

“My sole focus is on preparing for next week’s playoff game, so it won’t be addressed further.”

Bouchette notes that Haley didn’t take questions, that police have said Haley’s wife Chrissy was also involved, and that there have been “reports that Haley was shoved to the ground by an unknown assailant after he and his wife had dinner and drinks New Year’s Eve at Tequila Cowboy.” That shove must have been quite something for him to wind up with a shattered pelvis. Here’s what TMZ wrote about the incident:

The Pittsburgh Police Dept. have confirmed cops were called to the Tequila Cowboy restaurant just after midnight “for a minor scuffle involving Haley’s wife.”

“The scuffle was quickly ended. Todd Haley was not involved nor injured. Todd and Christine Haley were escorted out. No injuries. No charges.”

But the drama continued OUTSIDE the bar, according to NFL Network’s Ian Rapoport who says Todd was shoved to the ground in a 2nd altercation.

As many have noted, this is the second incident in two years involving a Steelers’ coach in a bar altercation around the playoffs. The Post-Gazette’s Ron Cook has more on the similarities to last year’s Joey Porter case:

Last year, it was Joey Porter. Arrested after a scuffle outside a South Side bar a few hours after the Steelers’ playoff win against the Miami Dolphins. Originally charged with aggravated and simple assault, resisting arrest and trespassing. Put on leave briefly by Tomlin. A really bad look for a man who is in a leadership position and should know better.

This is just one more odd story in what’s been a weird year for the Steelers. And while it sounds like the team doesn’t plan to take disciplinary action against Haley here, you can bet they’re probably not thrilled they’re in the news over this, whether the situation was truly “not of his doing” or not. If it really was something that was so outside of Haley’s control, it’s curious that he’s so reluctant to discuss it in any level of specifics. He may want the media to move on, but that seems unlikely until all the details come out in this case.

At any rate, it’s certainly unfortunate that Haley suffered injuries of this severity, and especially unfortunate that this happened not long ahead of when the team’s set to start their playoff campaign. And while the Steelers have been quite good at moving past distractions this season, this is yet another one for them to deal with. We’ll see how they cope.