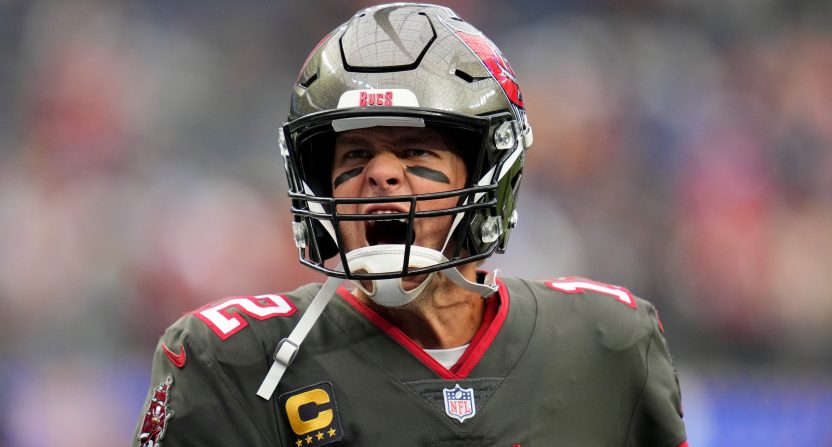 During the latest episode of his Let’s Go! podcast, Tampa Bay Buccaneers quarterback Tom Brady had a lot to say about the NFL’s decision to add a 17th game to the regular season starting this year. Suffice it to say, the 44-year-old is not a fan of the additional game (Transcription via PFT).

“I think it’s pointless,” Brady said. “I thought it was a terrible decision. So I don’t like the fact that we’re playing a 17th game at all. I think sixteen is plenty. And, again, you’re eight games into the year and you’re not halfway through, so that’s kind of a little frustrating aspect. So whatever, I mean, we’ll play it. It’s there, you know, a lot of guys probably miss games over the course of the season anyway, so they probably don’t play all sixteen, most guys. But, you know, if you’re fortunate to be able to make it through a season and you got to play the 17th game, I think there’s a lot of things that I would adjust to, you know, the offseason, you know, the regular-season schedule. A lot of people know my feelings on some of these topics. I’ve been pretty vocal about NFL issues over the last couple of years and some of the things that are done that I don’t necessarily think are in the best interests of the game.”

As for why the game was added in spite of a very vocal opposition from many of the players who have to actually participate, Brady thinks the answer is simple.

“Because the owners haven’t had to listen to the players,” Brady said. “Because usually what the owners want the owners get. So, you know, that’s just the way the business has gone. And we need strong union leadership from the player standpoint and a unified union in order to have the right amount of leverage to negotiate what we think is appropriate for an NFL player. But right now it’s more like we get told what to do and, yeah, there’s a vote and a CBA, but the choice is: don’t play or play under these circumstances. And we’ve essentially agreed to play under their circumstances.”

Ultimately, says Brady, it’s easier to get the 32 team owners to agree on something that benefits them than it is to get over 1,500 NFL players to agree to fight for what they want.

“We have union leadership which absolutely does the best they can based on the circumstances that they have but it is very challenging to get 1500 players to agree,” Brady said. “And it’s much easier to get 32 owners to agree who have all the information and they do regular quarterly meetings and they meet and they’re all interested in growing the game. Which, look, the players want to grow the game as well but we want to grow it in a way that’s, again, that’s right for the players as well. So there’s not a lot of thought that goes into that and I don’t think the coaches are represented as well, either. I think there can be a much more constructive way of doing the right thing by all parties, if there were the right committees and right amounts of negotiation and, you know, I think it would actually make for a much better game. Which is ultimately, if you really care about football and you really love the game, that’s what you’d care about in the end. Because the product of the football [game] is super important to all of us. Especially if you’re someone who’s been in football for as long as I’ve been in it.”

It’s good to hear Brady use his platform and status to push back against the NFL owners when it comes to player safety and what’s in the best interest of those who don’t feel comfortable speaking up. Of course, it’s unlikely that tough talk will change anything in the minds of the owners who are financially benefitting from the extra game. But it’s a reminder that this issue may have been decided but the players won’t forget.