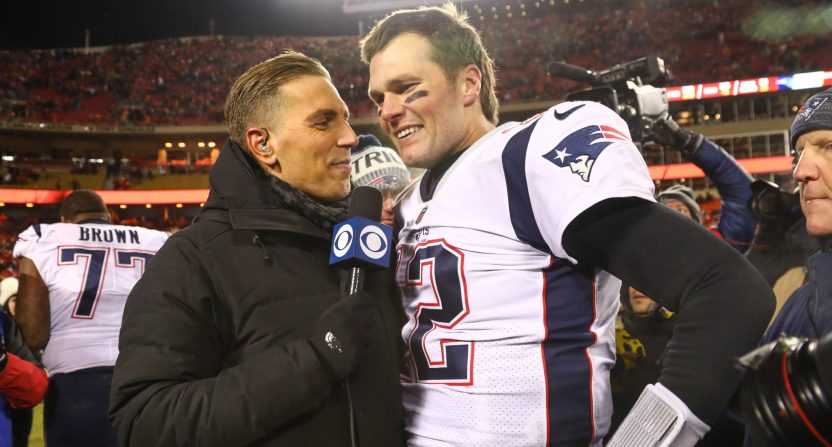 Ever since Tom Brady (finally) retired, there has been a ton of speculation about what will happen next. We do know that he’s going to produce and star in a movie that’s somewhat about him. But the real question surrounding the quarterback is, will he return to football? And if not, will he jump to television?

While there are plenty of people pontificating about his playing days not being over, it’s much more likely that Brady is looking into his retirement options. And if he did want to become a TV analyst, this might be the ideal time. With the dominoes falling around Troy Aikman’s presumed move from Fox to ESPN, one nugget from the NY Post’s Andrew Marchand has caught the attention of the NFL world.

They will call. There is no indication, as of yet, that Brady would be interested. https://t.co/kq6YQ94KTj https://t.co/qCxtk5S6Po

“Fox will investigate  [Sean] McVay and surely can’t be ruled out there. It has already talked to Sean Payton about a studio job, according to sources. Both Fox and Amazon still like the potential of NBC’s Drew Brees, despite his poor playoff game. And Tom Brady will receive calls from Amazon and Fox,” Marchand wrote on Thursday.

While he’s made it clear that Brady has not specifically indicated that he’d be interested in working for Fox or Amazon, the notion certainly got a lot of people around the NFL world talking about the possibility.

We just got him to retire.. can we please get a short break from this dude https://t.co/CciOZ4FZ4v

Everyone hated him for nearly 2 decades because he was a robotic, largely unseen zealot for the Patriot Way. Then he received a brief thaw when he was released from the gulag and allowed to have a personality. Now he is on the verge of everyone hating him again for overexposure. https://t.co/k2wwNl4p9V

Brady on FOX with Buck in the booth would be a home-run. https://t.co/i1bRvWabIo

It sounds like there are more obvious paths for both Fox and Amazon to take, not to mention the fact that no one knows if Brady would actually be good as a TV analyst. But it will be interesting to see how the entire scenario plays out for all of the networks, whether the seven-time Super Bowl winner is interested or not.