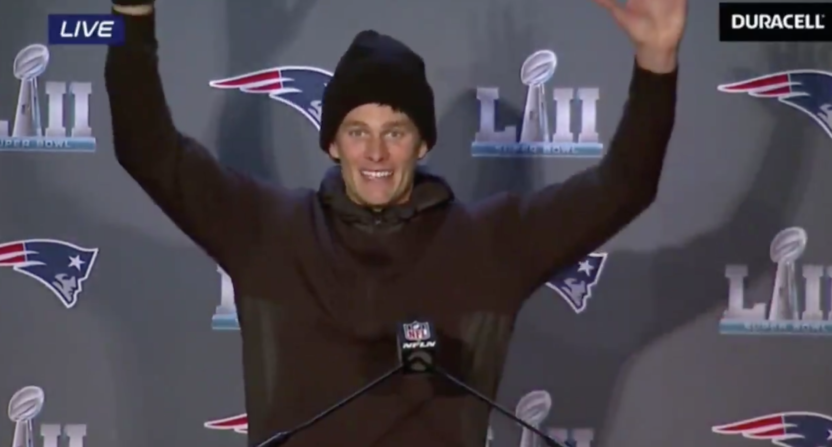 Having torched the Jaguars in the AFC Championship despite a highly scrutinized hand injury, it seems safe to say that Tom Brady is healthy heading into the Super Bowl. But that didn’t stop one reporter from asking about a onetime injury at the quarterback’s press conference Wednesday.

At first, the inquiry sounded ridiculous: Was there ever a time you were bitten by a dog at Patriots practice?

But Brady knew exactly what the questioner was getting at, and the resulting story was pretty wild.

We were in the stadium. This was I don’t know how many years ago. There was some military training going on at our stadium. Mr. [Bob] Kraft had allowed some military members to do some training they needed to do. And I was able to witness it at night. It was during training camp. And we got a chance to go on the field after and meet a lot of the guys. We were going to take kind of a team picture. Their team, and then there were a few of us that were out there. I think it was Vince [Wilfork] and Jerod [May] and Mr. Kraft and Jonathan [Kraft].

I was walking out to the middle of the field and there’s helicopters flying and everyone’s lined up. And some guys were kind of excited to see us walk up, so I was kind of close to all the guys and didn’t realize there was dogs. And obviously those weren’t labradors, those were tough dogs. And I raised my arms up over my head, and right when I raised my arm up the dog jumped up and I guess was going for my neck. And the guy grabbed the dog back down and the dog got my thigh on the way back down. So I was standing there with a bunch of tough guys, and they all saw it. And they’re like, “Are you OK?” And I’m like, “Yeah, of course I’m OK,” but I could feel the cut. But obviously I couldn’t say anything like, “Ah man, that hurt” because I’m with like the toughest guys in the world. So I just sucked it up for an hour after we said hi to all the guys and so forth.

Tom Brady explains how he got bit by a dog twice…

…including once on the lip? pic.twitter.com/24J1n3gB0G

Can you imagine if that dog had gotten Brady in the neck? “Tom Brady mauled by military dog” would have made quite a headline. So would “Tom Brady failed to seek treatment for gash to impress tough-guy soldiers.” Thankfully for everyone involved the dog was restrained and the cut was apparently not that serious, though it must have been pretty bad if it left a substantial scar.

Anyway, may this story teach us all that you do not mess around with military dogs.