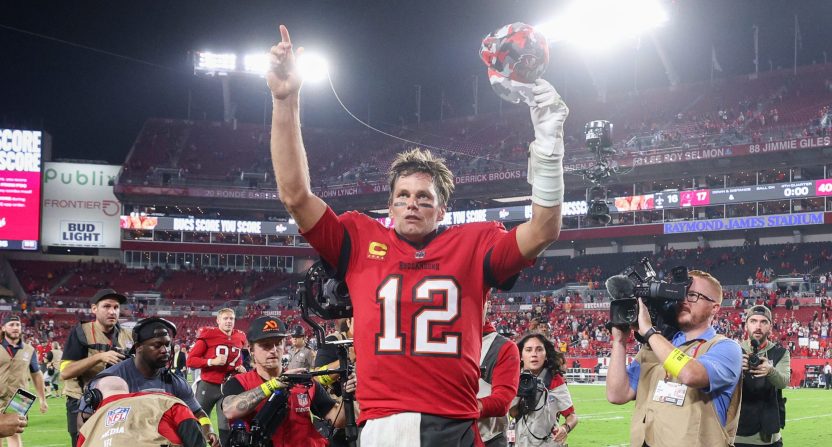 The Tampa Bay Buccaneers’ struggles on the year continued for much of the game on Monday night against the New Orleans Saints, but legendary quarterback Tom Brady gave a vintage performance in the fourth quarter to secure a huge win for Tampa Bay.

Tampa faced a 16-3 deficit with 5:53 remaining in the fourth quarter. Nothing had gone their way throughout much of the game, but Brady got to work when it mattered most.

Brady and company marched down the field on a 91-yard touchdown drive late in the game, capped off by a one-yard touchdown pass to rookie tight end Cade Otton.

The Buccaneers’ defense stepped up in a big way on the following Saints’ possession, limiting them to a three-and-out after a clutch sack from defensive end Carl Nassib.

Carl Nassib comes up with a clutch sack 💪

With 2:29 remaining in the game, Brady led his team down the field with a number of impressive throws throughout the drive.

Big first down for the @Buccaneers before the two-minute warning.

This route from Scotty Miller though 👀

With just three seconds remaining in the game, Brady found rookie running back Rachaad White on a six-yard touchdown pass to take the lead and secure the win after an extra point by kicker Ryan Succop.

This game looked like a complete disaster for the Buccaneers, but the excellent play of Tom Brady down the stretch snatched victory from the jaws of defeat.

Many are praising him on social media after the game for yet another clutch performance when it mattered most.

I can’t wait to hit my 40s and watch an 85-year-old Tom Brady lead game-winning drives alongside my children!!!

What a drive by @TomBrady. Could’ve done it in his sleep 💤

Everyone watching Tom Brady in the 4th quarter pic.twitter.com/5YatDicaLZ

It was a historic comeback from Brady on a number of different fronts.

This marks his 44th come-from-behind victory for the legendary QB, surpassing Peyton Manning for the most in NFL history.

Tom Brady has now completed his 44th come from behind win in the 4th quarter/OT.

That surpasses Peyton Manning for the most in NFL history.

It is also just the second time in his storied NFL career that he has ever come back from a 13-point deficit with three minutes remaining, certainly making it one of the most impressive comebacks of his career.

Tom Brady certainly continues to defy the odds at 45 years of age. While most of the game looked rough, his experience paved the way for Tampa Bay.

It was unquestionably a massive win for the Buccaneers, who distanced themselves in a big way with this win in what has been a pretty ugly NFC South division this year.