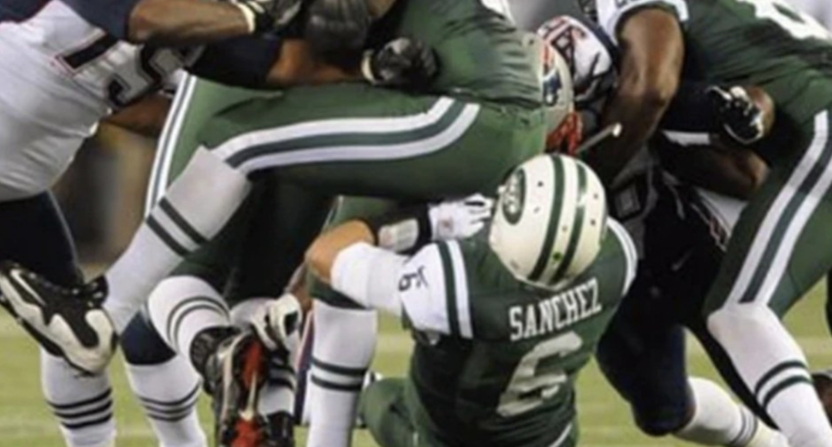 This weekend’s “butt punt” by the Miami Dolphins reminded a lot of the infamous “butt fumble” by Mark Sanchez, including Tampa Bay Buccaneers quarterback Tom Brady.

Sanchez infamously fumbled the ball after running into the backside of one of his Jets offensive linemen, leading to what became known as the “butt fumble,” something we thought might never be topped.

However, during the fourth quarter of Sunday afternoon’s game between the Dolphins and the Buffalo Bills, Dolphins punter Thomas Morstead was backed up into the endzone and ended up kicking the ball straight into his teammate’s backside. And so, the “butt punt” was born.

Everyone had a good laugh about the “butt punt” and it even came up on Monday’s episode of Tom Brady’s Let’s Go podcast, leading to Brady’s telling of how he found out about the “butt fumble” and how much he laughed about it afterward. Brady admitted he didn’t see the play live even though it happened against his New England Patriots and he was on the sidelines.

On his @SiriusXM show, "Let's Go," @TomBrady revealed that he missed the Mark Sanchez butt fumble when the Patriots played the Jets and he didn't know about it until he got back to his hotel later that night and then laughed for 20 seconds. pic.twitter.com/5x4610kWNU

“You kind of wonder if there’s any imprint or any dimples as it made its mark, literally,” said Brady, referring to the “butt punt. “So that was pretty unique. And I, you know, part of being a part of the lore of the butt fumble, I was at that game and the best part about that was I didn’t see it live. I really didn’t know what happened.

“And I got back to my hotel that right — I stayed in New York that night, it was a Thursday night game and I got to see my son the next day who was living in New York at the time — and it was about 12 o’clock I got back to my hotel and I turned on one of the networks and they were replaying the game and I saw the butt fumble. And the first time I see it I laughed out loud to myself in a room by myself for 20 seconds because I thought it was the funniest thing I’d ever seen in my life in sports. And the fact that our team was the beneficiary of it and I was on the sideline still makes it one of the funniest things I ever remember in sports.

I don’t think yesterday topped it, but it was pretty funny.”

Tom’s reaction is much better than Bill Belichick’s when he found out about it.